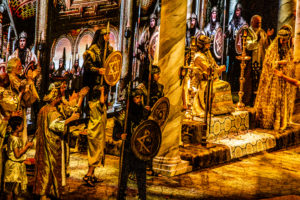 “David: King Of Jerusalem” emerged as the inaugural production in the brand new 3,200-plus seat auditorium for Charis Bible College in Woodland Park.

And according to most reports, few attendees left disappointed, with a thumbs-up among most show-goers.

The performance started at 7 p.m. on Nov. 2,  but many started piling in early as traffic got backed up due to the publicity surrounding the new auditorium and the show. Cars were lined up from the entrance to Charis all the way to Hwy. 24. Regardless of the delays, many were excited to experience the first live performance inside the new Charis auditorium, the largest in the region. Cars parked in every place possible on the college’s property, as buses gave people rides to the front doors of the facility.

Once inside, more than 1,000 people wandered around the common area and discovered their seats. The performance was delayed as more people were coming into the building after the planned start time of 7 p.m.

Once the musical commenced, it appeared as if every seat inside the gigantic 3,200- plus seat auditorium was taken. There were some empty seats on the second level on each side but there were easily 2,000 or more spectators for the Phase Two building’s inaugural performance.  The much-anticipated show was brought to the stage as an extra performance just to give the audience a musical in the auditorium shortly following the facility’s opening

The turnout was impressive as Robert Muran and his team of Charis students got up on the stage and entertained the large crowd.

The performance itself exceeded most preliminary expectations. The story told the tale of a time in the past where “despite struggle and tragedy, God’s mercy shines through.” The musical was filled with inspiring numbers, capped by dozens of dancers on stage. The performance showcased sword fights and dance scenes where dancers came to the stage from the audience aisles. Spectators were kept on the edge of their seats as the action-packed story unfolded.

The most amazing part of the live show was the integration of advanced technology to the performance.

The new auditorium’s special effects capabilities were showcased like never before  The top-notch sound system displayed the musical talents of the performers well, and other high tech additions helped add to the play’s effectiveness. On stage for the event was a giant screen that was used to set up backgrounds. The screen featured scenes of ancient Romee, accompanied by shots of guards in the background dancing along to the musical numbers.

Overall, the college’s first live show in their highly anticipated giant auditorium should be marked down as a success, based on my critical opinion. Not only did the inaugural event have an impressive turnout, but most of the people that did attend also stayed until the very end and left the property enlightened and amazed by what they experienced.