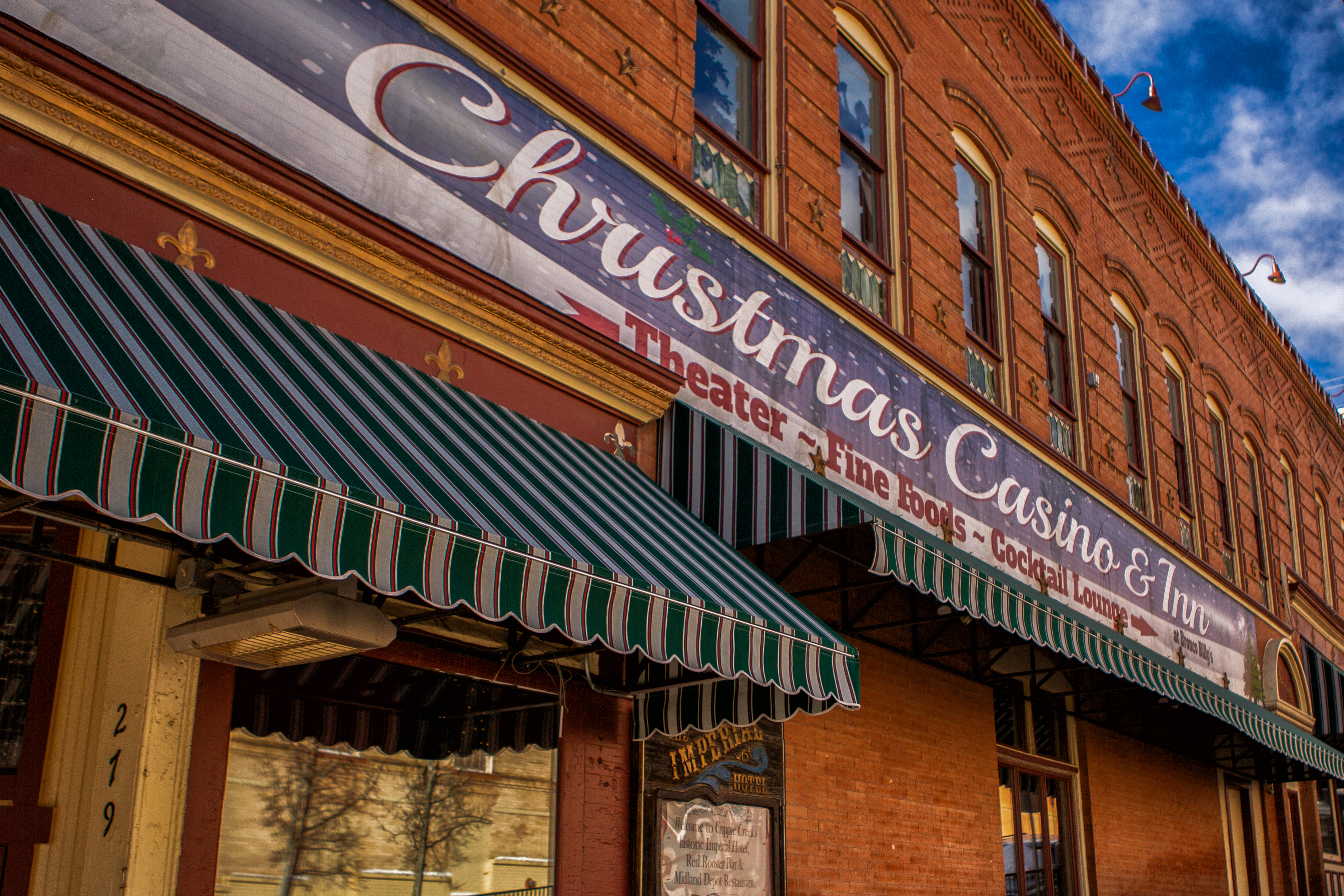 Santa is coming to town every day now in Cripple Creek. And better yet, St Nick may be prepared to hand out gifts and partake in holiday festivities 24/7.

For the next month and a half, his team of reindeer are ready to combat the elements but don’t expect any sled flights above the downtown area. Instead, all the action will occur inside and around Cripple Creek’s first new significant casino and hotel project in nearly a decade.

Last week, the much-heralded Christmas Casino & Inn made its grand debut. This was the opening act for a major expansion bid for Bronco Billy’s, which is pursuing a $70 million-plus expansion capped by a future six-story hotel, with a slew of amenities, and a parking garage.

But for right now, Billy’s has transformed the former Imperial properties, including the historic Imperial hotel and the old Big Jim’s Gambling Hall and Saloon, into what general manager Marc Murphy described as the only Christmas-themed casino in the Western United States. In fact, Christmas is now celebrated at Billy’s 365 days a year with their new project.

Initial casino patrons last week were left with little doubt about the Christmas-oriented festivities. Some of the preliminary features include a  17-foot, custom-designed Christmas pyramid  built by the Erzgebirge Palace in Germany and featuring five tiers of traditional rotating scenes; a 15-foot rotating tree and a 360-yard garland stacked with more than 4,000 ornaments; a 9-foot nutcracker and about 30 cuckoo clocks.

Prior to their opening last week, a huge line of more than 100 people assembled outside the doors of the Christmas Casino & Inn to check out the vastly remodeled establishment.

But for those who toured the Christmas Casino during the opening days, the biggest family attraction may have been a team of eight, real female reindeer, who hailed from Minnesota. The reindeer are temporarily housed inside an outdoor, pen, near the entrance to the hotel. They will be on display through the remainder of 2018 and will return around this time next year.

But if you are looking for flying reindeers, or reindeer out for an early winter romp in town, you may be disappointed. “Reindeer are the couch potatoes of the deer family,” quipped Daryl Simon of the Minnesota-based Crystal Collection Reindeer, which helped supply the casino with the reindeer.  “They are pretty lazy animals.”

A fun facts about reindeer sign may soon be posted outside their temporary home in Cripple Creek, including strict warnings about not feeding the animals.

Murphy said Billy’s wanted to make this project extremely special.  “We feel the casino will be successful because of its uniqueness and our reputation as Bronco Billy’s. It is much different from what we have done in the past,” said Murphy.

It also marks a big diversion from other Billy’s expansion projects that occurred in adjacent buildings. Billy’s, in fact, had to give up the license of Buffalo Billy’s in order to accommodate the Christmas Casino & Inn. In the gambling communities, a gaming operator is only permitted to have three licenses.

The $1 million-plus Imperial renovation followed a year of intensive research, headed by Dan Lee, the chief executive officer of Full House Resorts, the owners of Bronco Billy’s. Several company representatives toured the hot Christmas-theme markets in Germany, such as Nuremberg.

Plus, Full House currently has a property in Indiana that showcases a Christmas theme for two months of the year.  As a result, Lee liked the idea of turning this concept into a year-round theme with Cripple Creek’s mountain setting. 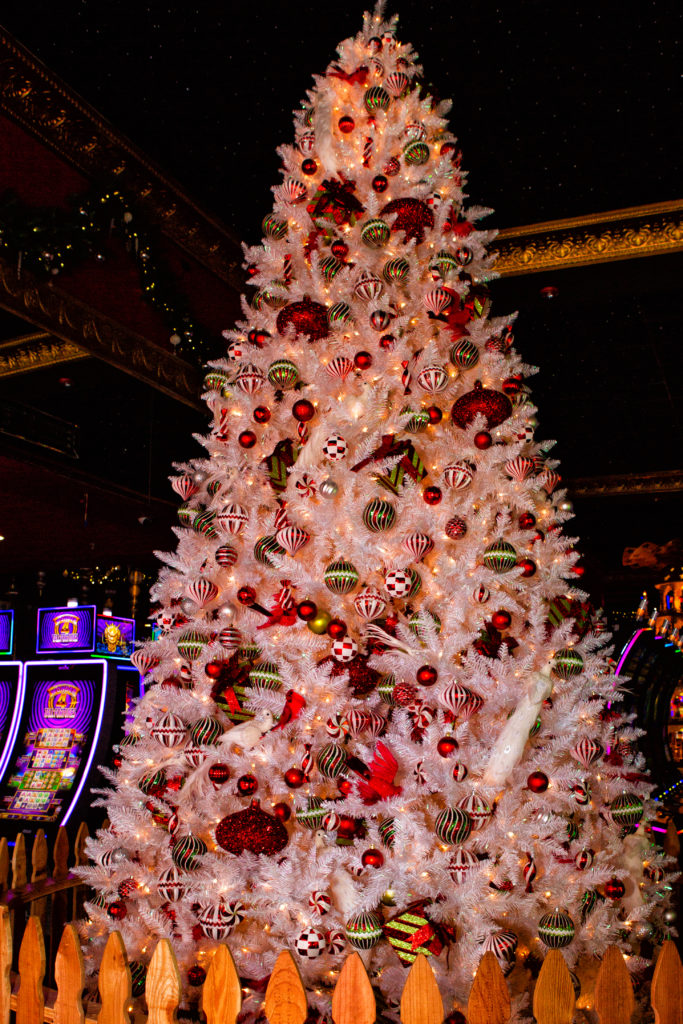 This Christmas jolly theme is even reinforced in the old Imperial hotel with wallpaper and special Santa and Mrs. Claus suites. “We want to preserve history while kissing it with Christmas,” said Bronco Billy’s Marketing Director Wendy Field.

The Christmas Inn currently features 12 rooms.  Plans also are underway for opening the classic Red Rooster Bar in the hotel within the next several months, according to Murphy.  “We are going to reopen the Red Rooster,” said Murphy.   But he still doesn’t know if it will retain this name, or be altered somewhat.

The bar has strong ties to Cripple Creek’s past, serving as a hub for actors of the old melodrama shows at the Imperial.  Plus, according to folklore, the Red Rooster was often a prime after-meeting gathering spot for council members and civic leaders, where many government decisions were informally crafted. It is adorned with historic décor and sports a classic bar area.

Bronco Billy’s also plans to reopen the basement theater area, once the home of classic melodrama performances from the late 1940s until the early 1990s, when the Mackin family owned the property.  The idea of bringing back melodrama shows has captured the imagination of some long-time residents.

“It is fully operational.  We are committed to using that space,” said Murphy. He cited melodrama shows as one idea under consideration but refrained from making any guarantees.

He also said the hotel would feature a restaurant. And in the future, plans are being proposed for a Christmas-oriented retail store, which may also feature an exhibit or display regarding the history of the old Imperial, according to Murphy.

As for the casino, Billy’s will feature Rudy’s Diner, offering savory fare, sweet treats and a build-your-own burger setup. Initially, the Christmas Casino will house about 150 of Billy’s most popular slots and betting devices. This is the first time the former Imperial casino area has experienced gaming action since 2014, when Big Jim’s shut down.

In its past stints as a casino, the Imperial and then Big Jim’s never developed much success. Murphy, though, is confident that Billy’s can make the project work.

Lee also stressed that the owners want their new Christmas Casino & Inn to serve as a mini-attraction to generate more visitors. “This town doesn’t need more slot machines, it needs more people,” said Lee, in a brief speech at last week’s grand opening. “We hope to show that attracting more people to town is good for everybody.”

This is one of the themes he emphasized in describing the benefits of the Billy’s expansion.

Bronco Billy’s is currently on a roll. Besides opening the town’s first casino/hotel project in nearly 10 years, the company won a big legal victory, when a district judge dismissed a lawsuit challenging their expansion development’s designation as a project of special merit.

This will set the stage for Billy’s to start work on their new indoor parking garage at the beginning of next year. Full House Resorts is eying late 2020 for the completion of their four-star hotel.