Creek Entertainment Hub to Feature Regular Shows
Trevor Phipps
Now that the New Year has arrived, the Butte Theater has kicked off a brand new lineup of shows, planned throughout the 2023 community season.

The theater, considered one of the best venues for live theater in the entire Pikes Peak region, works hard to serve as a golden jewel for the city.  Locals and visitors alike love the addition of live theater in Cripple Creek, a tradition that dates back to the 1890s, and was fostered by the Mackin family in the 1940s and then the establishment of the Butte Theater about 25 years ago.

This year, the theater has scheduled a hefty lineup to keep residents and tourists entertained every month during the winter and spring seasons. The series of community shows starts this week with a special performance of “The Effect of Gamma Rays on Man-in-the-Moon Marigolds” written by Paul Zindel.

The theater’s first show of the year will be featuring an all-female cast for the first time in recent years.

The Pulitzer Prize winning drama will be directed by local drama instructor Courtney Loggins. In fact, it marks the first time she has directed a show at the Butte. The presentation will also feature a slew of local talent, including Annie Durham as the production coordinator.

According to Loggins, the play was written in 1971 by Zindel who is known for pioneering the young adult (YA) genre. “The play is actually autobiographical for him,” Loggins explained. “He grew up in a household with an absent father and a mother who struggled with some mental illness and some alcoholism. And he had an older sister that picked on him.”

Going to public school was actually Zindel’s refuge from the treacherous landscape of growing up in an alcoholic home.  “He was very involved in science and later on he became a teacher himself and worked in the public school system. And that was where he was inspired to write this story,” added Loggins.

The play Zindel wrote is about a character named “Tillie” who is a girl growing up in a household with a widowed mother who is struggling to make ends meet. The story follows Tillie as she works on a science experiment of growing marigold seeds that were exposed to radiation.

While Tillie works on her experiment, her mother starts to unravel. “This is a play that is about cycles of dysfunction that happen in families, it is about intergenerational trauma, addiction, and poverty,” Loggins said. “And how one may choose to succumb, survive or transcend the never ending cycle.”

The cast will feature a slew of local actors including Sarah Oliver who has professional actor training in films. “This show is a perfect role for her and she is absolutely giving the performance of her lifetime,” Loggins said.

There also will be a 15-year-old girl Kaylee Peterson on stage who has never been on the stage in the past. “She is just passionate and she’s excited and she is phenomenal,” Loggins said. “I feel like I am watching someone that down the line is going to become a producer or a director.”

Loggins herself also comes from nearly a lifetime of experience in theater. She grew up in Shreveport, LA and she got into theater at a young age.

She then moved to Los Angeles when she was 19 and studied at the American Academy of Dramatic Arts in Hollywood. She then moved to Cripple Creek seven years ago and she has been involved with the Butte Theater ever since.

Loggins also appeared in a movie called “Jurrasic Hunt,” which was filmed in Grand Junction. She now is the head of the drama department at the Cripple Creek-Victor Junior and Senior High School. 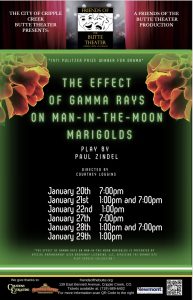 The Butte is Back with a Full Season of Shows

The Butte Theater’s community schedule continues next month as there is a show planned every month from now until May. Next month, the theater brings a special treat for Valentine’s Days with showings only on Feb. 10 and 11.

Butte-i-ful Love Stories will be a show written by the people of Cripple Creek. During the Christmas show in December, the Butte started taking submissions from area residents for their real life love stories that will make up the storylines of the play.

Later this year, the Missoula Children’s Theater will bring their rendition of “The Frog Prince.” In late March and early April, the Butte Theater presents a play called “Four Nights with Patsy Cline.”

In late April and early May, “Boeing Boeing,” a comedy is slated to be on the stage. The theater also plans to put on Cripple Creek’s Got Talent sometime before the summer.