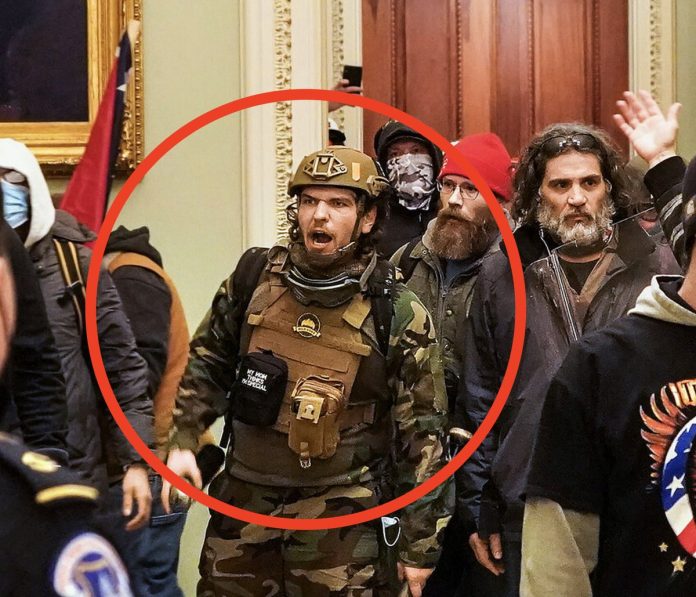 Following the attacks against the capitol building in Washington D.C. on Jan. 6, 2021, Woodland Park was put on the national map when resident Robert Gieswein (AKA “Machine Gun Bobby”) was wanted by the federal government for his role in the insurrection that captured worldwide attention.

In fact, the story reached news stations across the world with journalists as far as Europe covering the saga and searching for more information regarding “Machine Gun Bobby,” who had participated in several local protest rallies and maintained a rather high profile during his time in Teller County.

After it came out that Gieswein was wanted by the FBI, he turned himself into the Teller County jail.  After he was arrested, he was charged with several crimes including assault to capital police officers and criminal trespassing.

The FBI used videos from the incident to link Gieswein to the capitol building on January 6, 2021. The police say that Gieswein entered the building through a broken window, armed with a can of bear spray and a baseball bat. Authorities say that Gieswein assaulted at least one officer with the chemical spray.

Gieswein has since pleaded not guilty to all of the charges against him, and he has remained incarcerated in a federal holding facility in Washington, D.C. since his arrest. Now that almost two years has passed since the incident, Gieswein has still not had his trial. However, he has been in court several times for various motions.

Late last year Gieswein filed a motion to be released from detention while he awaits his trial that has been postponed many times due to COVID. In the motion, Gieswein wrote a long letter to the judge explaining why being incarcerated is not helping him.

“I am not an expert in anything, but I do know it’s not healthy to spend every day in here like it’s Groundhog’s (SIC) Day, with people with the same viewpoint, in the same situation, because we are all portrayed by much of the media as one type of person,” Gieswein wrote. “And I am saying nothing against the other men in here. Still, most of us do share a lot of the same views, and it’s easy to get stuck in your bubble in this environment. … Outside, I could choose to seek out other perspectives.”

Despite this plea, the judge denied Gieswein’s motion to get let out on bond. Therefore, Gieswein was ordered to remain incarcerated until the outcome of his trial.

During a court hearing last April, Gieswein’s lawyers tried to file another slew of motions. But the judge denied three of his motions: a motion to dismiss two of the assault counts against him, a motion to dismiss the indictment on the grounds that his right to a speedy trial has been violated, and a motion to reconsider detention.

Gieswein’s lawyers also tried to get the venue of his trial changed, saying that he could not get a fair trial in Washington, D.C. His lawyer Ann Rigby said that since residents of Washington, D.C. feel “victimized” and “targeted” by what happened on January 6, the trail should be moved to another location.

Rigby and Sullivan then started arguing about whether the nation’s capital would be the best place for the trial. As the lawyer and judge were going at it, Gieswein jumped in and said, “Your honor, I object to all of those comments there.”

“I don’t want to hear from you,” Sullivan said, telling Gieswein that he should keep talking only if he wanted to be “excluded from the room.”

“This is my case and I have a First Amendment right,” Gieswein replied.

After Sullivan said Gieswein “mouthing off” would land him behind bars, Gieswein reminded the judge that he was already incarcerated. Sullivan urged Rigby to talk to her client and cautioned Gieswein once again about speaking out in court.

“Trust me, Mr. Gieswein, if the case remains here—and I’m inclined to let it remain here—it’s going to be fair,” Sullivan said. “You’re going to have to get a hold of yourself. I don’t want you to have any outbursts during trial. I don’t want you to prejudice yourself before a jury that’s been selected.”

Gieswein’s trial that was supposed to commence last February was first put off until October. On October 19, Gieswein attended a court date on video conference that set Gieswein’s jury trial for May 2, 2023 before Judge Trevor McFadden.