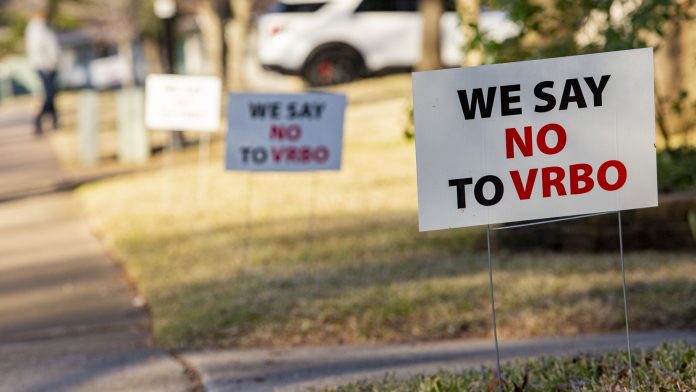 Woodland Park has joined the growing list of communities in Colorado that are declaring  a time-out  on the issuing of any  more licenses for short-term rental properties, referred to as vacation homes, and usually obtained  by a variety of internet sites.

A temporary ban has now been imposed on STR permits within the city, action that was fueled by community discussions and much resident input.

These units, owned by local property owners or private companies, are rented out for 30-days or less.  In Woodland Park, a substantial explosion of these properties in local neighborhoods has occurred in the last year.

This has become hot topic in the region, with just about every municipality holding discussions about possible regulations and the future of STRs in their town. In fact, over the last few months, the city staff has been working on giving recommendations to staff on how to address the growing presence of vacation rentals.

During last week’s city council meeting, the topic hit center stage when the council proposed a 90-day moratorium on the city issuing business licenses for STRs until guidelines can be drafted and passed. After much discussion and hearing input from the public, the council voted 4-2 to approve the moratorium with council members Robert Zuluaga and Rusty Neal voting “no.” Mayor Hilary LaBarre was absent at the meeting.

The process of researching the issues surrounding short-term rentals started with an earlier work session explaining to the council the staff’s findings after conducting research. Then, last Wednesday the city held two community engagement forums to hear about public concerns regarding STRs within city limits. (See related article)

The next day, council members David Ott and Frank Connors presented an ordinance to council to impose a 90-day moratorium on issuing business licenses for STRs. According to Ott, the move to issue a moratorium became urgent because of the steady increase on STRs in the city.

Connors then made a presentation explaining why a temporary moratorium on issuing business licenses for STRs was needed sooner rather than later. He said that he wanted the city to stop issuing STR licenses until the city can draft an ordinance with guidelines surrounding them.

In his presentation, he outlined what was allowed under city code for each zoning district. He explained that under the current city zoning laws, STRs are only permitted in areas that allow lodges and bed and breakfast establishments.

Under the current city code, STRs fall under either the bed and breakfast or lodges and inns designation, This prohibits STRs in neighborhoods that are zoned for single family or multi-family homes.

“Short-term lodgings are construed as lodging in the business tax code, then consistency demands they be considered as lodging in the planning code,” Connors explained. “Based on a fair reading of our Title 18, short-term lodging businesses are defined entities as lodges and inns, and they are only to be allowed to operate in the same areas where bed and breakfasts and lodging uses are currently permitted. This moratorium is requested to be approved to allow the city and city council to make adjustments to our ordinances and rules ensuring the city is issuing lodging business licenses within code. It is not fair to the citizens of Woodland Park or as a possible STR owner to continue to issue these business licenses outside of our title 18.”

After Connors finished his presentation, the floor was opened up for public comment. During public comment, four people addressed the council and spoke in favor of the moratorium.

The overall theme spoken by the residents at the meeting was that there needed to be regulations and guidelines regarding STR properties within the city. They gave several examples of problems associated with STRs, including houses being packed over safe occupancy levels, parked cars blocking roadways, and violations of other city ordinances like building code issues.

Peter Treloar, a 30-year resident, who owns a number of STR properties in the area, said that as an owner of an STR business, he supports the moratorium. “As you go through this process, please consider a high barrier of entry to this business,” Treloar said. “It shouldn’t be a low fence. Because I see people that are renting out their garage and they promote a Pikes Peak view, but that’s only when you lift the door open and stick your head underneath.”

Mayor Pro Tem Kellie Case said that she was originally opposed to the moratorium.

But after hearing from the public, she voted in favor of it. “What I heard this evening changed my mind,” Case stated. “Because it is not a long term thing and I think with our plan in place we can figure all of this out within 90 days.”

The moratorium will officially take place this week (seven days after last week’s decision). Before the council meeting on July 24, the council will be having a joint work session with the planning commission to address the STR issues and review the outcome of the surveys and community engagement forums.