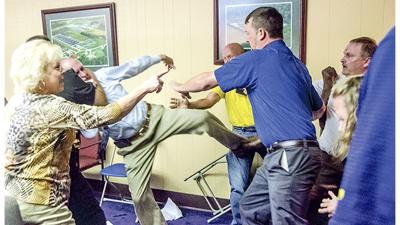 Some Shop Owners Calling for Ouster of Majority Members

It was the city versus local nongaming business operators in Round 10, with the gloves definitely  coming off in the latest bout.

The city, and more specifically, the  Cripple Creek Heritage Center, won the latest decision as the door is not open for the facility to enter the retail arena.  But more punches are expected in forthcoming weeks, with some merchants calling for a council recall campaign.

“It is not over,” blasted one business operator, late last week “This decision will be reversed. Some business owners are even calling for a recall effort or a more aggressive campaign to get pro-small business candidates elected to the council.

Last week, in an extremely heated meeting, capped by sharp verbal exchanges, the Cripple Creek City Council voted 3-2 to rescind an earlier decision that barred the Cripple Creek Heritage Center from doing any type of retail operation at the facility.  Plans are now being proposed  by Heritage Tourism Director Michelle Rozell to allow a small gift shop at the Heritage Center, specializing in rare items not found anywhere else in the community.

Rozell, in a presentation, made it clear that the proposed retail area would not clash with any current businesses and would mesh with the historic theme of the region. “I want to collaborate with our local businesses,” said Rozell, who said she and the employees at the Heritage Center do an active job of promoting local shops. “We are missing an opportunity…I am here to embrace you. Every person (who visits Cripple Creek) is looking for that one thing.”

But she faced a bombardment of criticism from a room filled with current shop and restaurant owners, who cried foul and argued that the city is not playing fair and is adding a dagger to already strained relations between the two entities.

Several business operators have already strongly complained about the city’s previous decision to do away with sponsoring special events and festivals and killing what some locals regarded as the “Summer of Fun.” A recent letter, authored by a former council member and his wife, entitled “What Happened to Cripple Creek?” has become the talk of the town.

Local merchants weren’t shy about voicing their displeasure with the plans proposed by the Heritage Center, noting the facility was funded by historic preservation and public monies. They contend this plan amounts to an attempt to compete with private businesses.

Moreover, they say this was not the intent of the Heritage Center, and believe the facility has better options, such as hosting weddings and private parties.

“I don’t know why we are even having this debate,” blasted John Freeman, owner of The Creek restaurant. “Where does it stop?  It never will stop. You are looking at taking away revenue from people who are struggling in this town.”

He and other business operators noted that the city should send the message it is “behind them, and not fighting them.”

“This is not a level playing field,” argued long-time business operator Lois Woods, who was a member of the council when the Heritage Center was approved for funding. She reminded the council that the facility was constructed by mostly historic preservation dollars and was designed as a resource for cultural information.

Edith Smith, owner of Creations Everlasting, asked what happened to the special events and festivals the city used to host. She suggested that the two entities develop a more cordial relationship. “We need to come together,” said Smith.

Business owner Bill Burcaw, director of the Cripple Creek District Museum, stated that the Heritage Center had other options, such as securing grants. “If you give an inch, they will take a mile,” feared Burcaw in discussing the Heritage Center’s retail bid.

“I do support you all,” replied Rozell, who attempted to have more direct interchange with the business operators at the meeting. But at one point, this attempt was halted by City Administrator Frank Salvato, who found himself playing the role as referee. He didn’t want to set the tone for a hostile debate

Clashing with Original Intent of the Council

Councilwoman Melissa Trenary agreed with the business operators. In a very passionate speech, she admitted that much controversy existed over the extensive funds used to finance the Heritage Center and the associated delays with completing the project.  She admitted that some ‘bad blood” existed over this project.

However, the majority council member were not swayed by the pleas made by the business operators. “I have not heard one fact,” blasted Councilman Mark Green, who has been quite vocal about doing business differently than past councils.  He has been a supporter of the city’s decision to no longer sponsor special events, such as the Salute to American Veterans Rally. “Are we not liking it (the Heritage Center retail  plan) because it is an opinion?” questioned Green.

“It is not going to affect any of these (Cripple Creek non-gaming) businesses,” he added, in reference to the retail plans for the Heritage Center.

At one point, tensions definitely mounted between Green and several meeting attendees, with the councilman demanding that one person leave the room.

Mayor Pro Tem Tom Litherland asked the group if their opinions would be different if the facility was a privately-run entity, and the word “Cripple Creek” was removed from the building. Woods stated no, but stressed that is not the case here.

Finally, Mayor Milford Ashworth asked for a vote on whether to rescind the earlier council decision that barred the facility from having any retail operations.

This motion was favored by Litherland, Green and Councilman Charles Solomone, with Ashworth and Trenary voting no.

In the wake of the decision, several small business operators have maintained this fight is far from over.  Social media posts have further added fuel to the fire, indicating that the issue will generate more debates.