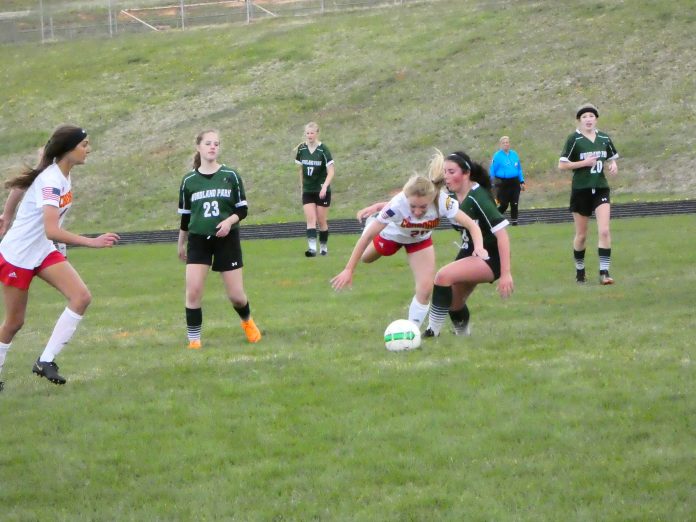 It’s now official: The Lady Panthers soccer team ended their season as one of the best local prep sports’ squads of the year.

Even though the ladies ended their season second place in their league, they still found themselves playing in the post-season period.

The girls earned the chance to play in the single elimination playoff tournament starting last Wednesday. The bad news is the Lady Panthers fell to Centuarus High School on the road 3-1 in the first round of the playoffs. This  eliminated them from the post season and ended their play in 2022.

However, the team’s success is still one to celebrate as they did better than they have in almost a decade. According to the team’s interim head coach Marcie James, the Woodland Park girls’ soccer team hasn’t earned the chance to play in the state championship playoffs since 2013.

The team’s coach said that there were several factors that led to their team’s success this season. “First off, I’ll give credit to the players for sure,” James said. “It’s a hard-working group of girls. I was telling them recently how neat it was that with the size of town Woodland Park is, the fact that we have so many girls with a pretty significant amount of talent coming together all at the same time has just kind of created a great dynamic for this team. We learned that it is going to take all 11 of us on the field knowing our jobs and working together. I think that has been one of the main reasons we have produced the type of success we are seeing on the field.”

James said that the girls were focused on how they conducted themselves on and off the field. She said that the teammates built good relationships, even while they weren’t playing ball..

Sophomore Hailey Witt led the team in scoring with 20 goals and a total of 49 points. Senior Morgan Berry was right behind Witt with 19 goals and 49 points.

Junior Shealan Waters was also one of the team’s stars during the season with 15 goals and 36 points. Sophomore Emma Vonderharr also had a great season after picking up 11 goals and 27 points.

The team’s starting goalie, junior Isabella Slocum played 14 games and ended the season with eight goals-against, 78 saves, and a goals-against average of 0.722. The Lady Panthers’ backup goalie, sophomore Katie Roy, came in clutch in the six games she played by getting one goal scored against her, 15 saves and a 0.356 goals-against average.

Anyone who has watched any of the Woodland Park High School baseball team’s games this year knows that they have experienced tough times, and haven’t gotten many breaks from Mother Nature. The good news is the boys did pick up a huge win last week to break a lengthy losing streak.

In fact, the team had lost 13 games in a row before last week. On Thursday, the Panthers turned things around when they squeaked out on top against Palmer 9-8 at home.

However, their big win last week proved to be too little too late. At the end of last week, the Panthers’ overall record was 2-15 and their league record 1-8. Needless to say, the team did not do well enough this season to see any post-season action.

Woodland Park ended up in fifth place in their 4A / 5A Colorado Springs Metro South League with Canon City taking first and Mesa Ridge falling into second.

The boys finished off their season with two home games. Last Saturday, they played Dolores Huerta Prep at home and on Monday they took on Canon City. The scores were not available as of press time.

Even though the boys’ record may not show it, there were many players that had good seasons according to their statistics. Senior Mason Pyles ended up finishing as the team’s best batter, but four teammates had batting averages over 0.400.

Junior Tanner McAfee proved to be the next best with a 0.442 average 10 runs, 19 hits, and eight RBIs. Sophomore Caden Howard earned a 0.407 batting average, he picked up eight runs, 11 hits and scored a home run.

Junior Ethan Horton also had a great season as he finished as the team’s homerun leader when he knocked three over the fence. Horton also got 16 hits, eight runs, and 15 RBIs during the season.