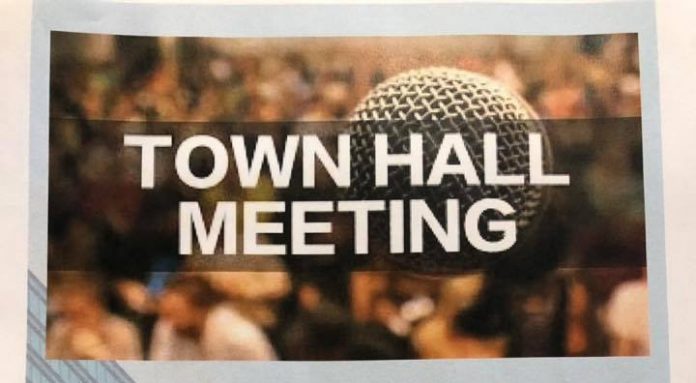 The heated controversy and political fireworks over a contract between the Woodland Park RE-2 School District and the Merit Academy, calling for Merit to lease part of the middle school, has been delayed for a week

So if you attend the meeting on May 25, prepare to grab a seat early and make sure to bring a sleeping bag.

The Woodland Park RE-2 School District was scheduled last week to host a town hall meeting, expected to draw large, possibly record crowds and a volley of heated comments from many citizens.  Instead of having a regular meeting, the Board of Education’s President David Rusterholtz planned to have a town hall where more public comment could be heard.

The main topic of the meeting was slated to be the charter contract with the Merit Academy and the lease agreement for them to move into half of the Woodland Park Middle School. Since the topic has generated much public interest, Rusterholtz wanted to open up the discussion to more members of the community. Plus, he thought it would require more than the hour of public comment normally allowed at school board meetings.

The meeting will occur this week.  According to Rusterholtz, the decision was made after the contract took longer to draft than expected.

“We just received the contract back from Merit Academy’s attorney on Monday,” the school board president explained. “I did not think that 48 hours of public review of the contract was sufficient.”

Later last week, the school district released the full contract and posted it on their website for the public to review. The 89-page draft of the contract lines out all of the details of the five-year contract that is planned to begin next school year.

At the last school board meeting in April, the board members held a lengthy discussion of the Memorandum of Understanding (MOU) with Merit. After the members held a discussion for over an hour, the board voted to approve the MOU four to one with board director Chris Austin being the only member voting against the approval.

The purpose of the MOU was to speed up the process of chartering Merit as a new charter school within the district. Merit submitted an application in late 2020 that was denied by the previous school board.

But since the topic got more attention after the last school board election in November, the new school board started looking for ways to speed up the process to add more school choice to the district. The MOU drafted as a way to prevent Merit from having to go through the entire process of applying as a charter school the second time.

The decision at the board meeting in April marked the third time the MOU was approved. In a lawsuit against the school board, the plaintiff claimed that the first two approvals of the MOU during meetings were done without the board completely being transparent to the public.

Recently, a judge filed an injunction to force the board to obey by open meetings laws. But, the judge also said that the courts have no jurisdiction to say whether the district should go through with chartering Merit.

Regardless, now that the MOU has been passed, Merit has officially become a charter school within the district. The contract that will be discussed at length at a town hall meeting this Wednesday at the Woodland Park Middle School, is the official document that lines out the details of the contract.

The full draft of the document, an executive summary of the contract, a frequently asked questions section about Merit, a copy of the district’s recent feasibility study regarding Merit using the middle school, and an anticipated timeline are all available on the district’s website at https://wpsdk12.org/.

According to the website’s frequently asked questions page, all of the concerns the previous school board had with chartering Merit are addressed in the contract. However, the rescheduling of last week’s town hall meeting did move the anticipated timeline back.

The town hall meeting to discuss the contract is on the books for Wednesday. After that, the board plans to officially vote to approve the contract during the board’s regularly scheduled meeting that was moved to May 25. The approval of the facilities usage agreement will also take place at the regular board meeting next week.

Update: The town hall meeting was held on May 18 after this article was written stay tuned to mountainjackpot.com and pick up the newspaper next Tuesday for the full article on what took place during the town hall.