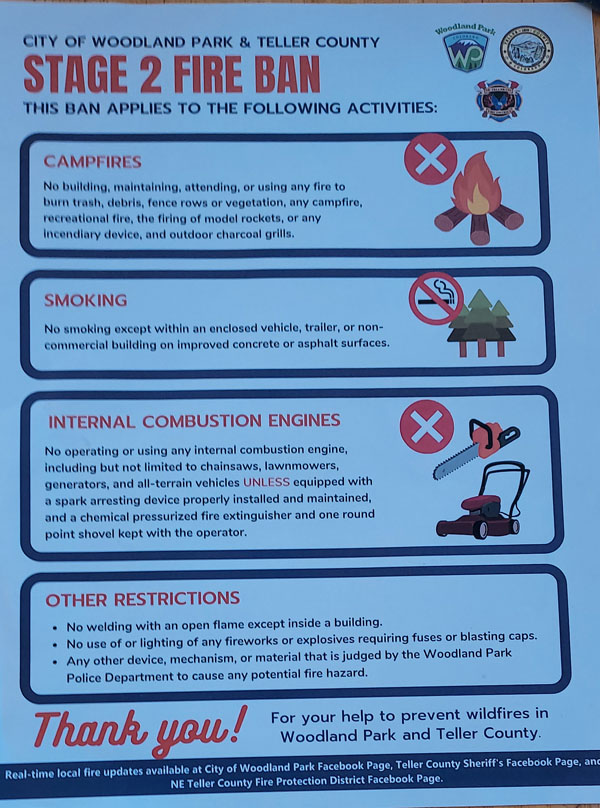 Anyone who has lived in the Teller high country for long enough knows that scary and fiery times are looming for the entire region and the southern Colorado area as a whole.

The abnormally high-speed winds, coupled with low humidity levels and no precipitation, have without a doubt put the region in extremely high fire danger conditions.

In order to prevent dangerous wildfires from ravaging the high mountain country, the Teller County commissioners elevated the countywide fire ban to a Stage 2 during their regular meeting last Thursday. This is one step short of a complete shutdown of recreation areas and parks and many outdoor trails.

But right after the fire restrictions got elevated, a large wildfire sparked up within the county. (See related story)

Normally, Colorado’s fire season does not take place until June or July when temperatures rise and there is little precipitation. However,  this year that does not seem to be the case as there have already been several wildfires igniting all across Colorado and the neighboring state of New Mexico.

In the month of April, Teller County saw approximately half a dozen wildfires that were either inside the county or at its borders. Unlike years past, even urban areas in Colorado Springs have seen blazes start up.

When the extreme fire danger conditions caused fires to start across the region last month, the county commissioners activated a Stage 1 fire ban. But then last week, fires seemed to start up everywhere including several in the Colorado Springs area.

After the local firefighter officials checked the fuels and the upcoming weather forecasts, they found that the fire danger was extremely high and recommended that the fire ban get elevated to help prevent devastating wildfires in the region.

Shortly after the county implemented its countywide Stage 2 fire restrictions, the city of Woodland Park also imposed the same ban for all of the city’s limits. According to a press release sent out by the city, Northeast Teller Fire Department’s Chief Tyler Lambert recommended that the city up their fire restrictions just like the county did.

Before last week, the county was in a Stage 1 fire ban that outlawed certain risky activities like having a campfire in a pit that is not permanent and restricting the burning of slash with a burn permit. But those restrictions are fairly mild and don’t change the daily lives of citizens that much. Now that the restrictions have been elevated to Stage 2, even more activities will be against the law, such as smoking outdoors and many grilling activities.

Flyers were dispersed throughout the area, announcing the changes, and details were showcased on local television stations and many social media and regular outlets.

What Does a Stage 2 Fire Ban Encompass?

Once a municipality announces a Stage 2 fire ban, it means that the risk of having a wildfire ignite is unusually high and basically doing anything that creates a spark is dangerous. The Stage 2 ban makes more activities illegal than the less rigorous Stage 1 in order to heighten the public awareness of extreme fire danger conditions.

For one, under a Stage 2 ban, nobody is allowed to have a campfire at any time whether it is in a permanent fire pit or not. Secondly, all kinds of outdoor smoking are banned. This includes smoking on restaurant patios as the only place where people are allowed to smoke now is inside an enclosed vehicle that is parked on pavement or concrete, or inside a non-commercial building.

Under the Stage 2 restrictions, all burning of any kind is not permitted. It is also against the law to cook outdoors using a charcoal grill or smoker.

Cooking with propane grills is allowed as long as the grill is placed at least 10 feet away from any combustible materials such as wood or grass. Operating equipment with internal combustion engines such as chainsaws, lawn mowers, electric generators, and all-terrain vehicles (ATVs) is still allowed but there are restrictions involved.

Any machinery with internal combustion engines must have a spark arresting device that is in good working order. Whoever operates the machinery must keep a fire extinguisher and a round-bladed shovel with them at all times.

A growing concern among civic leaders is that summer visitors may not realize the risky conditions that currently exist and not exhibit proper fire safety measures.