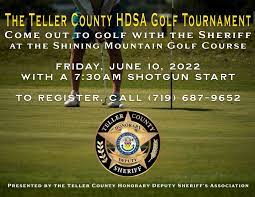 Links fever is back with a strong vengeance in Woodland Park and Colorado.

Besides the flurry of events at our own Shining Mountain, kicking off with the Teller County Sheriff’s Tourney on June 10 and of course the regular action of golf leagues, our state got an additional golf boost on a national level. Yes, this is a state in love with its football, hockey, b-ball and baseball teams  and one that revers links action.

As a result, no more April Fools’ stories regarding Shining Mountain as a site for bringing back the former International, a rumor that TMJ loved to rehash on a regular basis. Sorry folks.

Unfortunately, the International is long gone and will  never return. Our hats go out to the late Jack Vickers, the visionary behind this great event and founder of Castle Pines.

Yes, the long absence of PGA action in our state, which has quite a golf history (probably best known from the 1960 U.S. Open, which kicked off the official blooming of Arnie’s Army), is now over. The announcement that the BMW Championship will be coming to Castle Pines in 2024 was well received. This could be the starting point of a regular annual PGA tourney.

This was the site of the regular International tournament, an annual gala that occurred from 1985 to 2006. Why it fell apart is still a mystery. Some say the founder, Jack Vickers, tried to chase the dream of getting Tiger Woods to appear on a regular basis, a dream that backfired. (Mr. Vickers even tried to change the time slot to fit in with the projected birth of one of Tiger’s kids so Tiger could compete in the event.) Other theories stem from the fact that the PGA (Professional Golf Association), kept changing its summer schedule; and of course, the Colorado weather (with its frequent thunder storms) didn’t help.  Thunder storms are a little different for a major golfing event, with some 30,000 having to be evacuated immediately. It’s not like us hackers, when we are playing during a storm and may only get nervous if we see an actual lightning bolt strike our cart.

But the speculation is over. The BMW, now the third and most pivotal leg of the FedExCup playoff series in the late summer, will occur at Castle Pines, at least for 2024, and hopefully longer.

Speculation is running amok that Colorado will again land an annual spot on the PGA tour.

The International was quite an event with its Stapleford scoring system, often used by amateurs. Under this system, points are awarded per hole, instead of a total score, favoring those who score birdies and eagles and not penalizing a linkster for a bad hole or two.

As a regular International press participant, who actually witnessed Tiger Woods’ debut interview in Colorado, when he kicked the media’s ass with his savvy style in avoiding all controversial questions, I must say few sporting events could match the classy demeanor of the International. That’s not to  mention the beautiful women who attended the event.  Not everyone was there for golf.

Why Tiger didn’t like the event is a question no one can figure out. His style of play definitely favored the International format.  His arch rival, Phil Mickelson won there twice, and in the late 1990s,  was so far ahead in the final day of play, he could have literally walked off after the 16th hole and still come home with the trophy. He almost was thinking about doing that, but “Bones” (Jim Mackay), his longtime caddy at the time, talked him out of such a cocky display of golfing bravado.

But Tiger was someone who liked a routine schedule and the International departed from that system.

It will be interesting to see how the course plays in a traditional medal-play style.  Course designer, the great Jack Nicklaus, has reportedly been up there for the last five years and making numerous changes to the course.

All our statewide sports heroes,  led by John Elway, a member of Castle Pines for the last 30 years, are jazzed up about the news. As quoted to death last week, Elway, who has won the club championship at Castle Pines on a number of occasions, made it clear this is going to be a special event and will help fulfill the fans’ love for professional golf in our state, at least partially. Once Elway gets behind an event, look out.

This will become good news for Shining Mountain buffs too, as area golf courses often do promotions that tie in with this PGA gem.

The BMW actually stems back to the Western Open, the oldest-running events on the PGA calendar.  As the third-leg of the FedExCup Playoff series, the top 70 players compete, and no 36-hole cuts occur.  It then determines will make the top 30 for the final playoff event of the year.

The FedEx series has really become a big hit for the PGA Tour, in a playoff style that mimics the other major sports.  At one time, the PGA tried to commit Castle Pines towards holding one of these events, but Vickers was insistent on keeping the International  and making that a unique outing with the Stapleford scoring system and all.  He liked calling the shots, which sometimes frustrated the big executives of the PGA.

The tour players (and especially their spouses), fans and media loved the International.  I even start drooling when I recall the buffets at the former International press tents  Folks from Teller County would spot me there occasionally and question how I snuck into such an elite setting.

I remember during a previous fire ban (when the conditions were quite similar to what we are experiencing now), when the only person permitted to  smoke on premise was an infamous sports columnist from Colorado. No names will be released to protect the guilty. And the frenzy surrounding the appearances of John Daly, a former Colorado resident, were legendary.

The event typically sported a great field, including the top international players.

And then there is a story about one of our staffers getting into a squabble (actually just a misunderstanding) with a member of Tiger Woods’ security team. Not a pleasant sight. The one person at that time who didn’t want to argue with was Tiger’s caddy, as your camera could end up in the water.

Great times and memories.  Hopefully, this will become the return of an annual sports treat for Colorado.