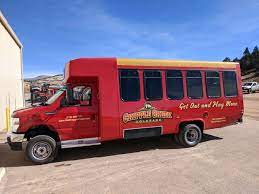 Future Cop Shop Could Become Part of the Mix?

Despite a staggering overall price tag, the Cripple Creek City  Council appears ready to get on track for an elaborate transit plan, mostly funded by Uncle Sam, for a full-fledged streetcar system and a transportation center.

And under one scenario presented last week at a public workshop, the new transit and streetcar operations/transportation facility, proposed near the Gold King Mountain inn, could partially serve to house the local police department “It is going to happen,” said Councilman Mark Green, who liked the idea of having the new center serve partially as a police headquarters.

For years, the police department has incurred a serious space crunch with its outdated facility on Bennett Avenue, in a historic building with ties to the Bell brothers.

As a result, local leaders see the latest pursuit for a major transportation hub as one possible solution for additional offices, including an outlet for the local cops. Plans for the operations center, with facilities for bus and streetcar maintenance, offices and a garage, were recently presented by the AECOM consultant group.

The main hurdle, though, is start-up funds, as the city must generate a considerable amount of matching funds. But they can explore a variety of sources for the money for the new multi-million dollar facility. Plus, the project could be done in phases.

Transportation Director Ted Schweitzer continued to stress that a huge jackpot of grant opportunities abounds for communities like Cripple Creek to explore these alternative transit prospects. If successful, the town could get at least 80 percent of the costs funded by the federal government. In addition, these plans can pave the way for the feds to pay for 50 percent of the operating costs.

But the overall price tag for the transportation facility and the streetcar transit system amounts to more than $70 million, with the lion’s share of this for a multi-story transportation hub. The total costs for this facility are estimated a little more than $49 million, based on estimates presented recently by the consultants.

At last week’s workshop, Litherland asked why the project has to be so grandiose.

Schweitzer cautioned that this is just a starting point for grant purposes and could get reduced.

Schweitzer is scheduled to attend a conference in Louisville, Kentucky, hosted by the Federal Transportation Authority, to further examine the transit and project funding possibilities for Cripple Creek.

Last week, the council gave the transportation chief the informal go-ahead to continue full-speed ahead with the transit building project and related trolley grant process. But city officials want to make sure they have the matching dollars in place prior to pursuing specific grants. Otherwise, these grants could go by the wayside  and have to be returned, according to City Administrator Frank Salvato.

Schweitzer said an array of  entities could participate, including private parties. He said the feds like to see widespread participation from a variety of partners.

The idea of  using this as a partial home for the cop shop could move the project along, noted officials.

“We are headed in the right direction,” said Mayor Milford Ashworth.

Cripple Creek has faced a tough road in the state legislative arena.

But surprisingly, the city netted a key recent victory against difficult betting odds, according to a detailed report made last week by Finance Director Paul Harris. Harris told the council that the gaming communities and impacted counties were confronted with a huge uphill battle in overturning a last-minute legislative maneuver that snagged away $1.3 million in their pot of gambling revenue.  The money would have funneled funds from their pockets to benefit community colleges and the state historical society, but would have cost Cripple Creek and Teller County more than $500,000 combined.

What irked leaders from the gaming areas is this move was made without any input from them.

But following an outcry from officials of Teller and Gilpin counties and the cities of Cripple Creek and Black Hawk, and key groups, such as Colorado Counties, Inc.  and the Colorado Municipal League, this money was returned for a one-year period. In addition, a  new working committee was formed to devise an overall solution. Harris noted that all three Teller County  commissioners attended the hearings on this issue and spoke against the change.

According to Harris, a big misperception has occurred over the source of the town and county’s

Officials hope to get this longtime funding situation clarified in a way that benefits the impacted gaming areas and the state, noted the finance direct4or.

“This is a win for the gaming communities and the counties,” said Harris, in commenting on the one-year fix.