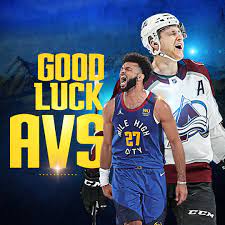 Last week it became official that Colorado sports’ fans have a chance to see a professional team in the state make it to a championship and possibly win the top title, according to insider reports.

The state has gone over six years now without having any of their pro sports teams not only win the big game, but even play in it.

However, as Av fans everywhere know, the Colorado hockey team has a good chance to shatter that horrible streak. In fact, the Avs have pretty much remained being the best team in the NHL for the entire season.

Even though they may not have finished the regular season with the best record in the league, there is still a strong argument that they are the hottest team this year. Since the Avalanche had such a stellar season, they clenched the top playoff spot early on, and they didn’t play many of their starters during their last regular season games.

In the end, the Avs finished 56-19-7 and they took the number one spot in their Central Division. They also finished as the best team in the entire Western Conference as the Calgary Flames ended their season two games behind Colorado.

The NHL playoff season started last week, and as of yet, they have not disappointed their fans. The Avs hosted game one of their series against the Nashville Predators and totally dominated the game when they won by a 7-2 score to kick off the postseason last Tuesday.

But then during game two in Denver, the Predators came and swinging to prove to the Avs that they would not be easy to sweep. But, the Avalanche still came out on top when they took the 2-1 lead on overtime.

This week, the Avs’ series against the Predators continues with at least game four on Monday depending on how well Colorado does. The playoffs are by far the most exciting time of the year to watch hockey, so make sure to make it into one of the area’s sports bars to catch the action live.

Some definite suggestions are McGinty’s Wood Oven Pub in Divide and the  Blue Moose Tavern in Green Mountain Falls, where hockey action and bravado ice talk are heavily encouraged.

When the Nuggets’ season started this year, many hoped that 2022 could be the year the Nuggets make it to the finals.

During the previous season, the Nuggets did quite well, but then they lost momentum in the postseason before getting eliminated.

This year, the Nuggets did look stellar during most of the season. However, most knew the team’s future was limited due to the stiff competition the team faced during the season.

The Nuggets ended up ending their season 48-34, and with their 6th rank in the Western Conference, they earned a playoff spot. Therefore, the Nuggets were actually given their second chance in a row to see the big game.

But just like everyone thought, the Nuggets started to choke when it came to the postseason, just like they did last year.

In fact, the playoffs just really did not start well for Denver and many were actually surprised that they didn’t get swept in four games. Even after the first game, it was obvious to fans that the Nuggets were going to once again miss a chance at the finals.

During game one against the Golden State Warriors, the Nuggets fell 123-107 on the road and then again 126-106 in game two. During the Nuggets first home playoff game, they lost a closer one 118-113.

The team gave their fans some false hope when they kicked the series into at least five games by winning another close one in game four at home 126-121. But then when they head back to the West Coast, the Warriors snuck past them 102-98 to take the series.

For Nugget fans probably the most frustrating thing is that the team has one of the best players in the league, yet they still seem to fall short of the championship. Nikola Jokic finished the 2021-22 season at No. 1 in the Kia Race to the MVP Ladder, after producing a campaign even stronger than 2020-21, when he captured the Maurice Podoloff Trophy.

Leading the heavily depleted Nuggets to the sixth seed in the West, Jokic racked up nearly 200 more minutes than the second-place finisher while eclipsing 2,000 points, 1,000 rebounds and 500 assists in a single season for the first time in NBA history.

Jokic averaged 38 points over his final four games with 17.5 rebounds and six assists, capping the regular season with 35 points, 16 rebounds, and six assists to go with a season-high five steals.

Too bad it just wasn’t quite good enough. Oh well, as they say, “There’s always next year.”