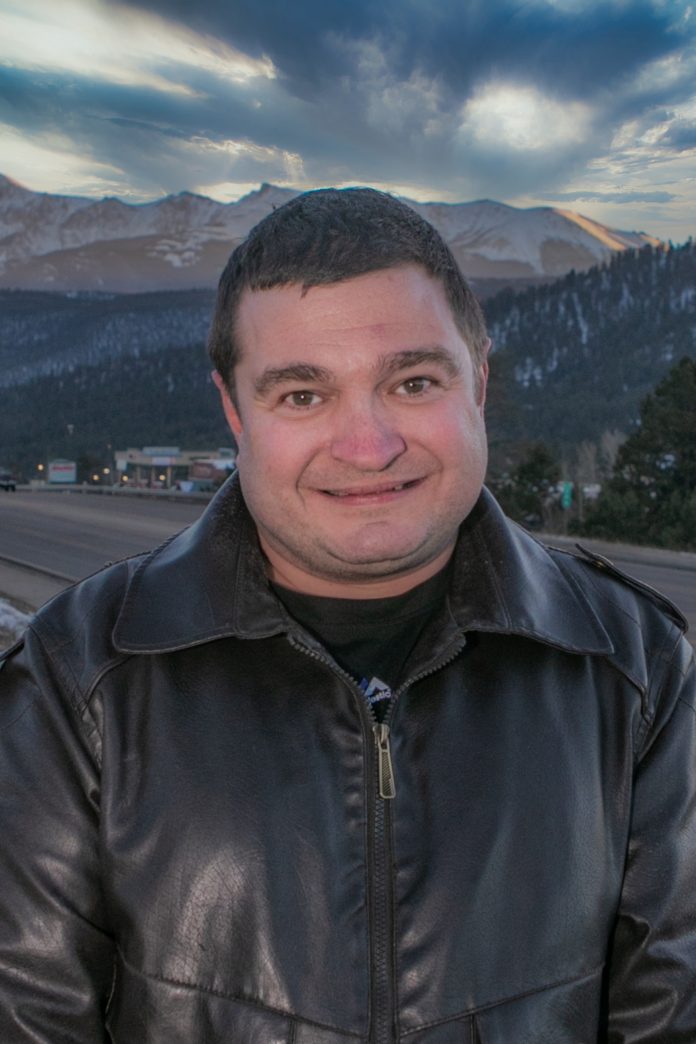 In the latest turn of events in a year of bizarre twists in Woodland Park politics, a huge upset has unfolded in the mayoral race, with neither of the front-runners gaining the necessary support to capture this position.

The results aren’t final, but the prospects don’t appear promising for the main contenders, Hilary LaBarrie and Robert Zalagua.

According to prime sources, and following a detailed survey  of eligible voters throughout Woodland Park, local journalist, podcaster, writer, TMJ bail bondsman and community celebrity Trevor Phippes is projected as the next top elected leader.

As a result of an 11th-hour write-in campaign, waged among several contenders, including Phippes and local videographer Michael Daltonn and a few other choice names, Phippes is expected to win the race and get sworn into office on April 7. The race attracted the most write-in tallies in the last 20 years.

“Stranger things have happened to us in the last year,” said City Manager Michael Dawson.  “This is life in The City Above the Clouds. Maybe, this will help us get national attention, which  will result in more funding dollars.”

“Nothing surprises me anymore,” said former city manager David Butteriee, who has attended more community functions than any official in recent history.  “I once complained about a local newspaper headline for ‘Bloody Sunday,’ but this was ‘Blood Tuesday.’  That said, we look forward to working with Trevor Phippes.”

“Yes, this is what happens when civility is thrown out the door,” said a disappointed Teller County Commissioner Eric Stony.

Complications reportedly occurred last weekend with a barrage of fist fights and legal threats between representatives of the two main  mayoral front-runner camps. Concerns were starting to develop even over the city’s recent decision to permit firearms in establishments serving alcohol.

According to local historians, this marks the most successful write-in campaign since that of Guy Grace, who won the Teller sheriff’s seat in the  mid-1990s through the write-in path. That one turned into an all-night affair. With the advantage of new equipment and the use or extensive media polling, area press and TV outlets are confident in projecting Phippes as the next mayor for the next four years.

Phippes in a post-election interview, credited his success to a heavy online and  media blitz, under the theme, “Bringing Our City Back to Normality.” Among his promises are a return to mandatory 30-minute meeting limits, with violators facing jail sentences if they don’t comply.

“We stand behind everything Trevor says,” noted Sheriff Jason Mikeselli, who along with the local police department, will come equipped to Thursday’s swearing-in ceremony with hand-cuffs and miniature  jail cells, if needed.

“We are no longer going to have these marathon sessions and will operate like a normal town, if such a term exists,” said Phippes, at a victory party that took place at the Crystola, 110 Reserve, Rhapsody, Peak View BBQ and the Blue Moose.

“Essentially, this comes down to money and booze,” said an elated Rick Langenbarg, editor of TMC.  “Our (council meeting-related) bar bill will now be greatly reduced, with Trevor now serving on the hot seat and not having to observe hundreds of hours of council discussions on a weekly basis.”

In the past, the town of Victor gained the niche as the nuttiest town for government meetings, with the joke of standing in the back of the room for fear of stray bullets. That title, though, has been shattered by the last several years of wild proceedings in Woodland, with local bars coming up with unique beverages for the forum survivors.

One such council session extended until close to sunrise, with comparisons made to the Woodstock music festival. Instead of “Time For Morning Maniac Music” as Jefferson Airplane singer Grace Slick once proclaimed at the acclaimed festival as the sun suddenly rose over a crowd of 500,000 people, it was “Morning Maniac Meeting Time” in Woodland Park, with a pretty impressive crowd also.

“This won’t occur anymore.  We are no longer going to be the ‘Woodstock of government meetings”,’ promised Phippes. Of course, previous leaders have made the same promises.

The TMC editorial director concedes that Phippes was  being partially compensated for his hours of covering the extensive council meetings that surpassed previous elected councils  by a 60-to-one margin, with his choice of drinks and libations at local establishments.

“We are talking about Hunter S. Thompson-like bar bills and excursions,” admitted Langenbarg. “Hunter  Thompson (known for such journalistic epics as “Fear and Loathing in Las Vegas”) probably beat Trevor when it came to Wild Turkey consumption, but that is about it.  But these types of meetings will  lead anyone to Gonzo behavior and behaving like the good Doctor of Journalism.”

It is estimated that the Woodland Park City Council has endured 17,000 hours of meetings and debates within a 12 month period.

Other than the mayoral uproar, no major upsets occurred in the recent WP election.