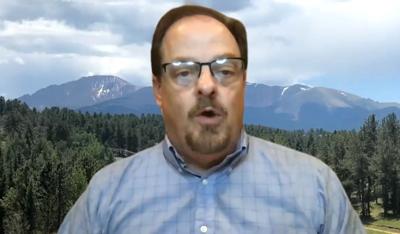 Former Woodland Park Councilman, Jim Pfaffe is back in the news.

Pfaffe unceremoniously retired from council last April after a tumultuous tenure. He was best known for attacking anyone he didn’t like no matter what anyone else thought about him.

He was once seen verbally accosting an old woman in Walmart because she got the last package of toilet paper on the shelf. According to reports, Pfaff kept screaming at the woman saying, “Don’t you know who I am? Give me that toilet paper!”

Security was called and Pfaffe went on a wild tirade about how he was out of toilet paper for his RV. He then insisted, at very least, the old woman should open the toilet paper package and split it with him. Security told him that was impossible and escorted him to the entrance, with Pfaff screaming, “Don’t you know who I am!” all the way.

Now it seems, Pfaffe is embroiled in another controversy. He has applied to run for governor of Alaska against current governor Spike Dunlefty. Dunlefty claims Pfaff has not lived in the state long enough to run for any office in the state. He said, “This guy wants to run for governor of Alaska but he’s never lived here in his entire life.” Pfaffe rebutted that living in an RV in Alabama should not prevent him from running for the seat. He said, “I’ve been everywhere, man I’ve been everywhere, man. Crossed the deserts bare, man I’ve breathed the mountain air, man. Of travel I’ve had my share, man I’ve been everywhere.” Dunlefty then said, “Quoting Johnny Cash won’t get you on the ballot here, you twit.”

Despite the hurdles to get his name on the ballot, Pfaffe insisted he has residency in every state he’s been in while traveling in his RV.

Alaska’s secretary of state, Antonio Flicken said he has to review the case. He cited the case of former Alaskan governor Sarah Palin who lives in Arizona after retiring as governor of Alaska in 2009 after battling corruption charges. Flicken said, “I’m not sure if Palin would be eligible to run again since she now lives in Arizona, but I’d vote for her if she did. She’s hot!!!”

After hearing of Flicken’s statement, Pfaffe said, “I think I’m mean enough to out hunt, out shoot, and out Grizzly anything Palin ever did.” He then stated, Palin was soft on crime and didn’t do enough to help Donald Trump overturn the 2020 election. He said, “I’d hunt down every judge who refused to overturn that election and kick their butts. Donald Trump is still my president.”

The case is scheduled to go before a court sometime before the next election ballots are printed. There is little hope Pfaff will win his case, but if he loses he intends to run as a write in candidate. He said, “They may not want me here anymore than they wanted me in Woodland Park, but I’ll never give up. If I can’t be governor in Alaska, I’ll run for governor someplace else. I wanna be a governor!!!”