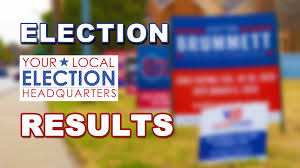 After a city election that became heated with excessive mudslinging and social media trash talk ended, the status quo councilmembers came out on top. This year the election was touted as one of the most important in history as an extra seat was up for grabs.

In the end, both incumbent councilmembers and mayor earned the right to keep their seats. The new wave of candidates calling themselves “conservative” were sent packing by a substantial margin.

Candidates Matthew Hayes, DeAnn Bettermann, and Don Dezellem did not receive enough votes to earn a seat as they all got less than 1,000 tallies.

Therefore, the council will look almost the same as it has in the chambers with the exception to two new faces. Councilmember Rusty Neal and Robert Zuluaga still have two years left on their term and Nakai, Case, and LaBarre earned the right to stay seated on the council.

Voters also got to decide on three questions. One gives the right to council to remove appointed or elected members from their seats due to misconduct, another clarifies what “conflict of interest” means, and the last better specifies what the council can do when it comes to appointing people on the dais. All three of the ballot questions were passed by significant margins.

The election this year broke a record for having the largest turnout for an election where only city matters were on the ballot. A total of over 2,500 ballots were turned in, which equates to around 50 percent of the registered voters in the city.

During the last hours of the election, the city hall was inundated by people coming in to turn in ballots. Due to a power outage at city hall, voters had to wait in long lines at the front desk to turn in their ballots.

According to city officials, the election judges suffered through a four hour power outage at city hall forcing them to count ballots using flashlights and work lights. The internet went out on them two separate times and the power outage caused last minute voters to pile up in the last hours the election was open.

The judges worked on counting the ballots until around 8:35 p.m. Tuesday night. The results were officially announced just before 9 p.m. when city officials called the winners at the Crystola Roadhouse where they were all having an election watch party.