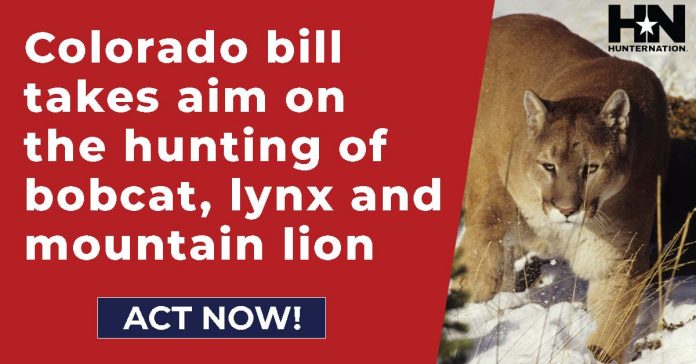 The Teller County commissioners won their first big legislative fight of the year in playing a key political role in shooting down a proposed ban on the hunting of wild animals, namely mountain lions, bobcats and lynxes.

The issue attracted a ground swell of opposition from rural counties and hunting groups, but had much support from some urban lawmakers, biologists and veterinarian specialists.  For four-plus hours last week, more than 100 people, including two Teller County commissioners, testified before the Senate Agricultural and Natural Resources Committee at the state capitol.

In the end, the committee killed the bill, SB22-031, which received much attention in the last month, by a 4-1 vote.

“We hit it out of the park,” said an ecstatic Teller County Commission Chairman Dan Williams, in describing the opposition to this legislation, led by rural area officials. “It shows we can make a difference in Teller County and the importance of staying engaged.”

The commissioners took a lead role  in opposing the measure and were quite vocal about their stand at local and state meetings.

If the legislation moved forward, it would have prohibited the “shooting, wounding, killing or trapping of a mountain lion, bobcat or Canada lynx.” It would have permitted certain exceptions, such if a person is threatened by a wild animal.  But it still called for strict penalties for those who killed wild animals for recreational or commercial pursuits.

Vice-chairman Erik Stone shares the views of Williams, and believes the county prevailed in an effort that he described as part of an aggressive attempt to prohibit recreational hunting in Colorado, and reverse years of managing wildlife.  Moreover, he has accused urban lawmakers of trying to clash with the rural heritage of Colorado.

Both Stone and Williams described this as not just a big win for Teller County and rural areas, but also for the Colorado Division of Parks and Wildlife (CDPW) agency.

“We took a strong stand, but were respectful,” said the commission chairman, who has aired videos of mountain lions on his property in southern Teller. He admits mountain lions and other wild animals are beautiful and capture the unique essence of living in Colorado; but contends that they can pose safety hazards for kids and pets if not controlled and managed.

There are an estimated 3,800 mountain lions that prowl the Colorado countryside, with several hundred located in the Teller and Ute Pass high country.  A number of significant mountain lion postings have been spotted recently, including a family of lions in the Cascade/Chipita Park area

Mountain lions are generally afraid of people, but can be dangerous, when they get accustomed to residents.

Wildlife officials note that Colorado is lion country, and that long-time residents may never see a wild animal, but they “will see you.”

Stone says a complete ban like this actually puts wildlife at risk.

Many opposed the bill, with some bill critics driving four  and five hours to testify, according to Stone.

But the hearing was packed with supporters too, who mostly resided in more urban areas. They argued about preserving mountain lions and considering other conservation measures besides hunting. They cited the growing number of mountain lion kills, which now exceed 500 a year in Colorado.

Jose Rose, a conservation advocate for the Mountain Lion Foundation, testified that for too long mountain lions and other wildcats have been killed, despite “considerable scientific evidence that hunting is not necessary to regulate their populations,” that hunting exacerbates conflicts with humans and that hunting hinders the species’ ability to perform their essential roles in natural ecosystems, according to a report in Colorado Politics.

According to the commissioners, the supporters questioned the North American Hunting Model, used by wildlife authorities for decades.

“It became apparent to me that the people supporting this bill want to ban recreational  hunting in Colorado,” said Stone.

The speakers at the hearing, according to Williams, were almost evenly matched between those for and against the legislation.

In their specific comments, the board chairman said they tried to emphasize the importance of respecting the rights of rural Colorado, with 46 out of the 64 counties existing in rural parts of the state. Plus, if this bill moves forward, Williams indicated this could add to the rural versus urban conflict that persists in Colorado. He said this is a time when we are trying to come together more and respect our diversity.

The commissioners, though, didn’t have to twist many arms in killing the bill.

The legislation faced massive opposition in the last few weeks, with several of the bill sponsors dropping out. Plus, the chairman of the committee, Kerry Donovan, is a rancher, who stressed his opposition to the bill in an earlier press conference.