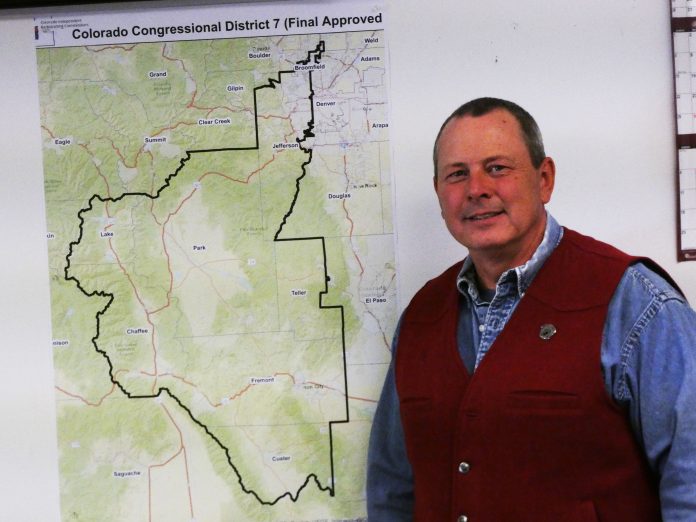 Candidate Reigns as only Contender From High Country Mountain Area

Since the launching of his campaign, one big question lingers:  Can a Republican win in Colorado’s newly aligned 7th Congressional District, which now includes Teller, but is heavily populated by  Democratic strongholds like Broomfield.

Andersen is optimistic that GOP candidates, such as himself, can make an impressive showing, but he contends they must work hard and court many unaffiliated voters and stress issues that benefit citizens of the district.

Andersen’s move comes about after the entire state of Colorado went through a vigorous redistricting initiative.  This occurred after the 2020 census.

As a result of this process, Colorado gained a House of Representative seat.  A committee  spent the last year redistricting the state. Many counties statewide are now in new congressional districts including Teller.

But now, Teller is in the 7th Congressional District with Broomfield, Jefferson, Lake, Chaffee, Park, Fremont, and Custer Counties. Ed Perlmutter has been the representative for this district since 2007 as well, but he announced plans to retire at the end of his current term.

According to Andersen, since  Perlmutter stepped down, he saw an opportunity. Andersen said he thinks he could be a viable candidate due to his 20 years of experience running businesses in the region.

“Personally, I wanted to run because of my frustration over the last few years surrounding everything that has gone on with COVID, the economy, and the border,” the congressional candidate explained. “It’s just been a crazy last couple of years for businesses. And I think that there is a disconnect between our elected officials and the public and businesses. They just don’t have enough time in the trenches in the private sector to really know what’s going on and the effect many of their bills have on us.”

Currently, Andersen is running in the Republican primary election against Erik Aadland, Laurel Imer and Tim Reichert. According to Andersen, he is the only one running for the seat that does not live in Jefferson County, so that does give him a certain niche.

For the Democratic primary election Kyle Faust, Julius Mopper, and Brittany Pettersen have all announced their run for the open congressional seat.  Out of this Democratic lineup Pettersen was endorsed by Perlmutter and Senator Michael Bennet.

A Viable Chance for Congressman Carl

Andersen said that even though he has never held a political office, he sees himself as a viable candidate. “I think I am in a good spot with my age and career to hold a political office,” Andersen said. “Because of all my experience in the field I think that that is a good qualification to have. I am not engrained in lobbyists and people trying to buy my vote or steer me differently. So, I don’t have that baggage to contend with.”

Andersen plans to focus  in issues that would cross the political aisle. For one, he wants to work on decreasing building regulations to make housing within the state more affordable.

He also wants to make it so an executive order (made by a president or governor) can only last for so long before it gets approved by the U.S. Congress or the state legislature. Better fire mitigation practices within the national forest are another hot button issue for Andersen.

Andersen will be making himself available at several meet and greets in the district over the next few months. He also said that there is a forum planned where all of the candidates will answer questions from the public sometime soon. He is planning to appear at the Divide community center at a meeting this evening (Feb. 8), hosted by the Teller County Republican Party, beginning at 7 p.m.