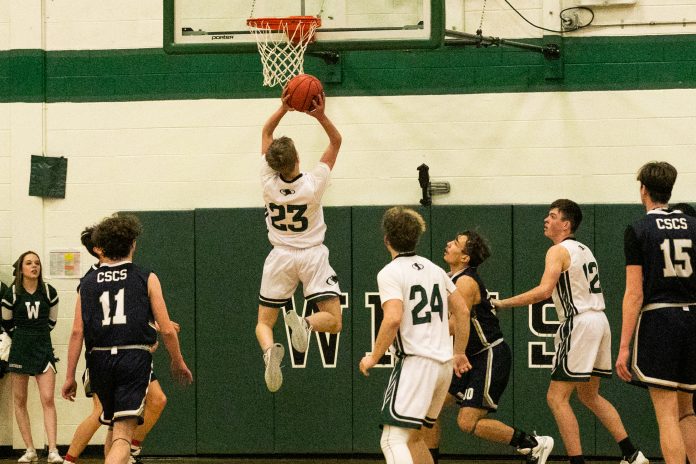 The Woodland Park High School boys’ basketball team this year has impressed spectators and shown that they mean business.

Even though the team’s record is just around .500, the team has vastly improved from previous seasons and has a shot at playoff action. Such a possibility would have been unheard of in recent years.

The team’s head coach, Brian Gustafson (who also coaches the golf team), returned this year doing an earlier stint with the b-ball team at Colorado College and then taking some time off from the sport. Since he has returned, the players have been excited and it has shown while on the courts.

In fact, the boys have already won more league and non-league games than they have won since their 2017-2018 season. Currently, the boys are 8-7 overall and 5-3 when playing in their league.

The Panthers are currently in third place in their Colorado Springs Metro- South League. The team sits behind Palmer and Mesa Ridge who each have 5-1 league records.

Even though the boys aren’t in first place now, according to their coach, there are still plenty of games to be played that will decide the Panthers’ playoff fate. The Panthers have four games left that are all league matches.

But, since there are so many good teams in their league, just about anything could still happen. The best route to the playoffs for the Panthers is to keep winning all of the games for the rest of the season.

On Jan. 27, the team won a huge match against Colorado Springs Christian School (who was ranked 9th in 3A in the state at the time), 50 to 42. Before that match, the Panthers lost three games in four days due to the team suffering from injuries.

Last week, the Panthers were scheduled to play two matches, but due to the snow, one of the games was rescheduled to Feb. 7. Last Friday, the Panthers kept their winning streak alive by defeating James Irwin 72 to 40 on the road.

According to Gustafson, the Panthers are guaranteed to play in a district tournament that starts on Feb. 19. But if they can get into the top four in their league, then they would get a bye during the first round in the district tournament.

Depending on how they do in the district tournament, the team could then qualify for regionals. If the Panthers do well enough at the regional tournament, then they could move on to the state championships.

The coach said that he has liked what he has seen from the boys this year. “Relative to where we were at the beginning of the season, I feel like we have improved a lot,” Gustafson said. “We have improved in all aspects of the game from individual skills to team execution. But everybody is improving toward the end of the season. There will be a lot of ‘down to the wire’ contests.”

He said that the team is one of the better outside shooting teams in 3A in the state. “We have worked really hard in establishing more of an inside game for balance as well as making sure we execute,” Gustafson said. “We make the defenses have to guard multiple actions, so that we continue to get good shots.”

He also said another strength of the team is rebounding. He said that since the team is smaller than just about every team they have played, rebounding has been a major focus.

According to Gustafson, one area of needed improvement involves holding onto the ball while on offense. He said that they need to keep working on reducing turnovers so they have more chances to shoot and score.

So far this season, junior Sonny Ciccarelli has basically led the team. This is Ciccarelli’s third year as a starter on the team and he serves as captain, the Panthers’ lead scorer, and the one put up against the top opponent players on defense.

Ciccarelli has scored 235 points this season and made 78 field goals. While on defense, he has picked up 64 rebounds, 31 steals, and nine blocks.

Another player that has stood out has been junior Caleb Hughes who is the team’s top rebounder. Hughes has scored 122 points and picked up a total of 89 rebounds.

Sophomore Bryce Broeker has also been one of the team’s top rebounders. Broeker has picked up 101 rebounds and scored 68 points.

This week, the Panthers have two must-win home matches coming up. On Monday, the team plays their rescheduled game against the 9-7 Banning Lewis Academy Stallions at 7:30 p.m. Then on Thursday, they return to their home courts to challenge the 7-6 Buena Vista Demons.