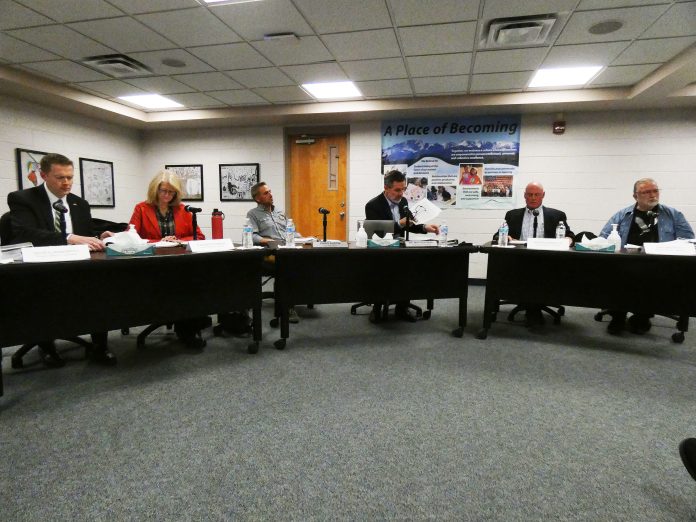 During the 2021 election, the Woodland Park School District RE-2 Board race won the top award for being the most heated election.

During the race, four of the candidates (David Rusterholtz, Suzanne Patterson, Gary Brovetto, and David Illingworth II) all came out as being the “conservative” choice for the school board.

The other four candidates (Paula Levy, Misty Leafers, Amy Wolin, and Dale Suiter) also joined forces but they did not claim to be affiliated with either political party. During the forums, the debates got heated at times as the four conservative contenders expressed similar ideals.

In the end, the four conservative candidates, who campaigned on the platform of more parental rights,  won the school board seats. This is a trend that occurred throughout the Pikes Peak region and in many parts of the nation. The new RE-2 members were officially sworn in last month.

Then, last Wednesday, the board held a work session at 6 p.m. and then they had their first regular business meeting at 7 p.m. During the board’s first official meeting, the room was packed with a full audience with over half of the crowd being teachers.

The meeting started with organization procedures where the members picked the board officer seats. For the board president position, David Rusterholtz was nominated and then elected to the seat by the board unanimously.

For the vice-president position, Suzanne Patterson nominated David Illingworth, but incumbent board secretary Chris Austin then chose to nominate Patterson. Since there were two people nominated the voting for the vice president position was conducted via a secret ballot. The tallies then decided that Illingworth would be the board’s vice president.

During the public comment portion of the meeting, several members of the community signed up to make statements to the board. Some that spoke congratulated the board and said that they now expect them to act on some of the things they promised during their campaigns. Others told the board that they were worried that their plan was to “indoctrinate the children with their conservative beliefs.”

Amongst those who spoke during public comment were two former school board presidents, Carol Greenstreet and Beth Huber. Greenstreet was the first to take the podium and she also expressed some concerns she had about the new school board members.

“I have expressed concerns about the partisan nature of the election,” Greenstreet said. “And those concerns have not been resolved by the election. While you won the majority of the votes, I do not think it is a result in which the parents have spoken. I fear the win was more related to being in a district where the registered Republican voters are three times the registered Democratic voters. And many people saw the word ‘conservative’ or heard the word ‘republican’ and blindly supported the attached candidate.”

Greenstreet also said that she feared the new board members have already decided on their agenda without a public forum. “Based on the things I heard in the forums and read in the newspapers, there are a few things I’m concerned about,” the former school board president said. “I’m concerned that you already set your agenda in private meetings prior to being sworn in without the fifth board member and without taking the time to learn from the experienced educators in the room. I’m concerned that you already decided to get rid of the Summit Learning Platform rather than learn about it and hear about the independent review a make a public decision together.”

She also said that she was concerned their plans are more around supporting the new Merit Academy than all students. Huber than took the podium and reiterated Greenstreet’s concerns.

In other key action at the inaugural meeting for the new board, two local mental health experts gave a presentation on mental health issues in the district.

Before the presentation district superintendent Dr. Mathew Neal applauded the achievements of the mental health team. “Across the United States symptoms of depression and anxiety have more than doubled in the last 12 months,” Dr. Neal said. “25 percent of all youth in the United States have experienced depression symptoms. Young ladies under the age of 18 who were suspected by their parents and mental health professionals to have attempted suicide has increased by 51 percent across the United States. Last year here in Teller County, in the Woodland Park School District and our surrounding area there was not one single suicide of any student in the county.”

After the presentation, the board members gave speeches and introduced themselves to the audience. Rusterholtz then asked to schedule another meeting for this Wednesday to get started on some board action items.

During their campaign, the four new board members promised to change the structure of the board to a body that has more control over curriculum and staff. They said that they wanted more control to prevent certain subjects, such as the critical race theory, from being taught in schools, and they wanted to review the Summit Learning Platform. It is expected that during the next meeting the new members will start to take steps toward restructuring the board.