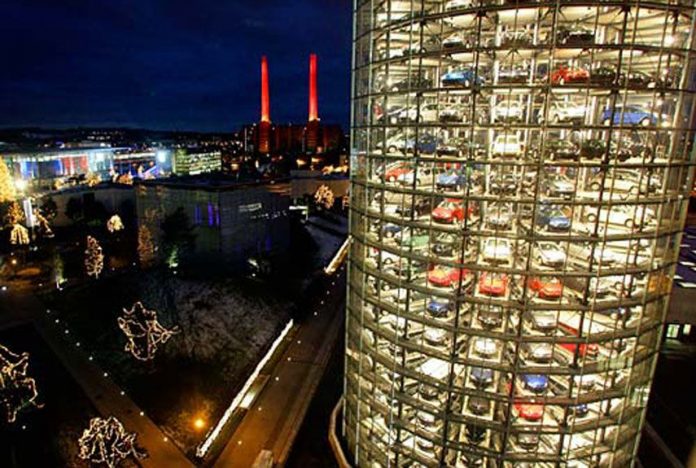 In an effort to deal with its managed parking situation, Green Mountain Falls town officials will introduce a proposed plan next Tuesday for a 1,000-vehicle, six-story, parking garage, near the swimming pool area.

Construction is slated to begin within the next few weeks.

The fee for using the garage has not been announced, but is estimated to near the $35 a day range.  Hiking fees and possible transportation charges could also be assessed, for a total package of close to $50.

Funding for the facility will be facilitated by the new federal economic stimulus package and by the Pikes Peak Rural Transportation Authority.

The garage plan, submitted by a Colorado Springs-based company, will become a key highlight of the Green Mountain  Falls Board of Trustees’ April 6 meeting. Elected leaders are enthusiastic about the garage concept, if it meets land use regulations.

“This will end all the false rumors about meters, and once and for all, put this parking controversy to rest,” said Mayor Jane Newbary.  “We are looking at a managed  parking system in town, and the idea of paid-parking has been taken the wrong way.  We are just  trying to control the crowds. The cat is out of the bag.  We are a trails’ destination. Our overcrowded problems began initially with the closure of Waldo Canyon. The pandemic has not helped.”

As part of the plan, garage-goers will pay both parking and hiking fees (the latter is estimated at $10 per person). In turn, they will receive possible discounts at local restaurants, a detailed trails map, and for an extra charge, will be provided vehicle transportation to the base of several key trailheads.  Plus, tours of the local geese hangouts and certain area attractions will occur.

“This is a great opportunity for the town,” said consultant Jonathan Cane, the assistant city administrator of Idaho Springs. “We want to get everyone involved.”

A Trails Margarita will be offered at the Blue Moose Tavern and special Hiking Omelets and  Mimosas will be featured at both The Pantry and Mucky Duck restaurants.

However, reaction to the plan at the outset has created much outrage, with a demand for an in-person meeting to discuss the garage and overall parking  options. Since the pandemic, the GMF Town government facility has remained closed, and all meetings have been held virtually.

In recent months, this virtual system has come under fire, especially as the town considers to become the first community in the Ute Pass to consider a paid-parking format.

But GMF Town Manager Angie Spang has noted that  no in-person meetings will occur until 2023 at the earliest. “We are just following the governor’s safety precautions,” said the GMF town manager. “The pandemic is far from over.”

Meanwhile, area trails club leader Roco  Basi is organizing a  “Free the Trails From Nonsense” protest this weekend. The protest will start in front of town hall and continue to the summit of Mt. Dewey and then to the base of the Catamount Reservoir Trail.

“We have advised the town to move slowly on this issue, but that hasn’t been the case,” said  Basi, known for his occasional combative clashes with the town manager at GMF meetings.

At least 500 hikers are expected to participate in the protest.

City officials, though, have cited the importance of moving ahead with a comprehensive plan to address the problem, which they believe could reach a crisis stage by this summer.  They are expecting crowds of 5,000-plus on certain weekends.  “We need a solution,” said the mayor.  “The parking garage makes the most sense, with a paid system this summer for visitors.

Planning Commission member Lamar Matews, who lives near one of the popular trailheads, though, expressed reservations about the forthcoming paid-parking plans. “Let’s not become another Manitou Springs.”

When Manitou Springs initiated a paid-parking system, a strong backlash impacted local commerce for the first or two years.

Meanwhile, Marshal Virgil Hodgis has agreed to enforce whatever provision the town adopts.  The town is still mulling the use of parking ambassadors, clad in geese outfits, to direct motorists to the new parking garage and to offer guidance.

They will collect fees this summer, while the new garage is being constructed.

Despite the difference of opinions on the town’s hiking and parking scenario, all sides agree  that GMF trail-goers need more sign guidance.