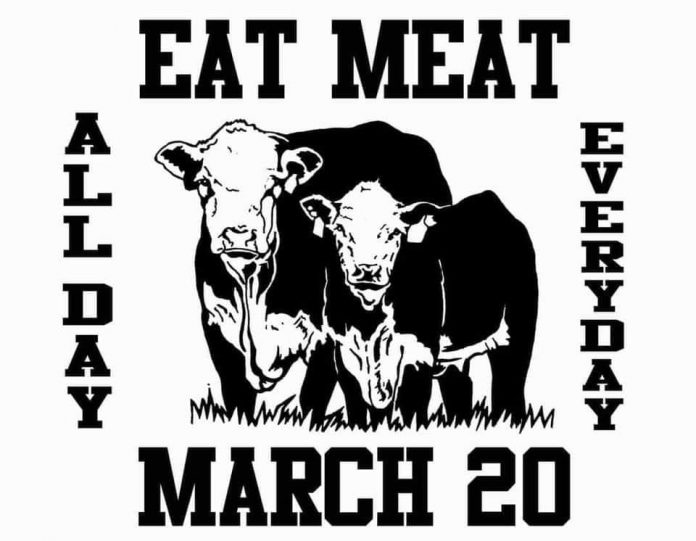 A Colorado governor’s crusade to curtail meat-eating activities in the state for a single day completely backfired in the Teller High Country, with businesses using this attempt to highlight their special entrees for the carnivore-devouring crowds, who crave steaks, prime rib, burgers, ham, bratwurst and more.

As the saying goes, Teller County is meat country.

Earlier this month, Colorado Governor Jared Polis made a proclamation establishing March 20 as “Meat Out Day.” During that Saturday, the governor asked that Colorado residents abstain from eating meat for 24 hours and try non-meat alternatives instead.

Polis and others liked the idea of not eating meat for a day to emphasize the health and environmental benefits to eating meat, as well as bring attention to animal cruelty and the growing plant-based protein industry. His edict even got strong support from a variety of environmental-based organizations.

However, shortly after the governor’s proclamation was made, the Colorado Cattleman’s Association, over 20 counties, Nebraska and Wyoming fought back and declared March 20 as “Meat In” Day. “When Governor Polis declared March 20 as ‘Meat Out day,’ it was a slap in the face to the thousands of ranching and farm families across this state,” said Weld County Commissioner Chair Steve Moreno in a written statement. “Yet another hit against rural Colorado.”

Weld County and other areas across the state decided to hold celebrations on that day to encourage people to eat meat to support the cattle industry that brings in billions of dollars a year to the state.

“To combat this misinformation and fight against the Meat Out movement, CCA and the livestock industry will be coordinating with restaurants, grocery stores, and other retail fronts to feature a meat product on March 20th to support the beef and meat industries, while also supporting these businesses who have felt the crushing blows of the pandemic and lost business and customers,” a statement by the Colorado Cattleman’s Association said. “We are supporting a ‘Meat In’ movement instead… meet in a restaurant and order your favorite meat dish, meet your family and friends for a meal featuring meat. Let’s focus on keeping meat in and on the breakfast, lunch, and dinner table!”

Locally, the words of those standing up against the “Meat Out Day” proclamation were heard. Many eateries in town held specials on meaty meals and threw parties to encourage support the livestock industry.

At the Historic Ute Inn in Woodland Park, the place was packed with patrons for most of the day, many of them eating prime rib and other meat products to celebrate “Meat In Day.” Russ’s Place in Divide, Ralf’s Breakroom in Cripple Creek, and the Crystola Roadhouse all used the idea of eating meat as a marketing tool to get people into their eateries. Some of the “Meat Out” protest festivities, including the antics of locals and people in southern Colorado, were aired on a  major television station in Colorado Springs.

The Woodland Butcher Block advertised a celebration for “Meat In Day” the day before. They held specials on meat products all day and they invited the Mountain Magnolia Food Truck into their parking lot to serve up meaty dishes.

According to an employee at the Woodland Butcher Block, the day was quite busy for them. The butcher shop planned to open their doors at 9 a.m. that morning and the employee said that people started lining up at their front door as early as 8 a.m. to get in on their special “Meat In Day” deals. The employee then said that the shop was so busy all day that they ran out of meat at 2:30 p.m.

Rhonda Ladley, owner of the Mountain Magnolia Food Truck also said that business was good on March 20. “We were really busy and we sold out of all of the food we had by 4 o’clock in the afternoon,” Ladley said. “We are probably going to be set up at the Woodland Butcher Block’s parking lot on Saturdays from now on.”

The Teller County Republicans group also formally spoke out against the governor’s proclamation and advertised a special event on March 20. During their event entitled “Keep Your Mitts Off Our Meat Day,” the group set up grills at their headquarters in Woodland Park and invited people to get out and join them for a barbecue.

Pictures from the event showed several people out in front of their headquarters building with grills full of bratwursts and other types of grilled meats. “This is an unofficial, unsanctioned, and causal event in open defiance of Governor’s ‘Meat Out Day,’” the Teller County Republicans said on a social media post.

After the event, several organizations across the state said that the governor’s “Meat Out Day” proclamation actually helped the meat and livestock industry as many people went out to eat meat that day. One member of the Cattleman’s Association even thanked Polis for establishing a day that helped the livestock industry.