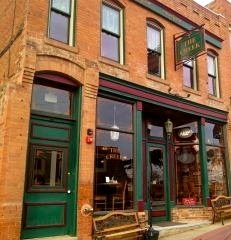 During last week’s Cripple Creek City Council meeting, the big news was that The Creek Restaurant in town would be making a return.

The local favorite eatery used to serve pizza and other foods before it shut its doors in 2015. In its prime, it was frequented by many locals, residents, community leaders, area politicians and TMJ staff members.

The Creek’s tavern liquor license expired when the building was put on the market in 2016. Last Wednesday, three owners forming Creek, Inc. were approved for a hotel and restaurant liquor license.

The owners  of the revived Creek are William “John” and Karen “Micky” Freeman along with a family member who lives out of state.  The Freemans are local business owners and familiar attendees at Cripple Creek council meetings. They plan to close on the building sometime in April. Then, the team plans on getting the restaurant ready to open in May, with a grand opening temporarily scheduled for Memorial Day Weekend.

The new owners chose to keep the restaurant’s name because people in town already know about it. However, according to John Freeman, the new Creek will have a completely different menu than it had before.

In an interview last week, John Freeman said that he plans to reopen the restaurant as a casual dine-in style with a large menu. The new menu will feature a variety of appetizers as well as new entrée items. They plan to serve a variety of burgers and steaks, including having buffalo and elk meat as options.

As far as remodels go, Freeman said that the changes to the building will be minimal. “We hired a restaurant consultant and he is helping us with the kitchen side of it,” Freeman explained. “Since our menu is different than the original Creek’s menu, we had to change some of the equipment in the kitchen. It’s not a big deal but there will be a little bit of a change in the kitchen. And, we are probably going to replace the carpet downstairs with a more practical flooring for a bar or restaurant situation.”

He also said that they plan on redoing the bar upstairs. So, the restaurant will have two functioning bars. In total, the new Creek will have around 100 chairs.

Each bar will have a tap system where they will offer 10 different beers on tap. They plan to get Colorado craft beers and offer an extensive wine and spirit list.

Once open this summer, they plan to be open every day and serve food from 11 a.m. to 9 p.m. The bar will then stay open until midnight every night.

Freeman said that he hopes the new restaurant will give families another dining option locally.

During the last meeting, the city council approved the vacation of property that the city had for right-of way. The property vacated went into Marvin Kobza’s ten lots on Golden Avenue.

Kobza said that he wanted the city’s right-of -way portion to make it easier to build new houses on the property. The city council also removed the property line between two of Kobza’s lots to make it more functional for new developments.

Kobza said that he has plans on building new homes on his lots in the near future, but no specific plans have been proposed.

The council also approved a storage box for a fiber optics company, which will be placed behind the city hall.