Development Could Kick Off Major Destination-Area Push for Cripple Creek

Make your reservations now and gear up for Cripple Creek’s opening saga in its bid to become more of a gaming and tourist destination hub.

The new $14 million, 101-room Wildwood hotel project, located adjacent to the casino on Hwy. 67,  is nearing a completion stage. More notably, the hotel is preparing for an early June opening, and is already offering pre-opening enticements for reservations made prior to April 15.  “We are very excited,” said Nanci Ciampa, the Wildwood Hotel and Casino Sales Manager. “We are taking reservations now. This will take everything (in Cripple Creek) to the next level.”

City officials, business operators and civic leaders couldn’t agree more, as the new Wildwood Hotel represents the first step in helping the town reach its goal of attracting more vacationers, tourists, visitors and gamblers, who may want to partake in several-day stays that combine gaming with outdoor recreation, history and a spree of amenities in the region.

The idea of developing a destination area has been thrown out for several decades, but local leaders believe the new Wildwood Hotel represent the first tangible new project to help make this dream a reality.  With the opening of the new hotel, more casino lodging projects are expected to  follow in these footsteps.

The new Wildwood hotel project was heavily lauded in TMJ’s 2021 “Best Of the High Country” contest. The need for more modern rooms in town was mentioned by many voters, and the new hotel was cited as a definite leap in the right direction.

“We are a ‘Diamond in the Rockies,’” added Ciampa, in describing the new project. 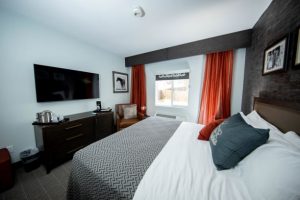 The new Wildwood has been in the planning, development and building stages for a lengthy period.  The project broke ground in 2019 in  a ceremony that commanded tremendous interest, attracting a huge gathering of community leaders. At the official ground-breaking, Wildwood owner Joe Canfora  described their hotel project as the opening act in the town’s next phase of development. He cited the need for more lodging, housing and non-gaming amenities as the real gap in the town’s development growth.

Plans have been launched for more than 500 additional lodging rooms and special amenities, with the new Wildwood Hotel, and expansion efforts mulled by Bronco Billy’s, Triple Crown and Century casinos.

Out of these, the Wildwood project won the initial new lodging race.

Wildwood operators admit the COVID-19 menace caused some delays.  But the project is now poised for an early June opening, according to officials.

A grand opening could occur in June, noted Ciampa. She said the new hotel plans to host an event that kicks off the summer season, and possibly sponsor more events further in the year. The Wildwood Hotel and Casino Sales Manager believes the timing could be ideal for their new hotel opening and early celebrations.

By that time, the COVID-19 scare could be nearing a close and a new law will be in full force, eliminating all single-bet gaming limits and calling for more games.  This could elevate Cripple Creek to even another level. 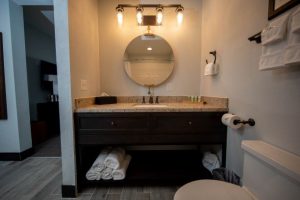 The modern rooms will feature a mountain, outdoorsy look and feel, according to Ciampa. Plus, she mentions their trophy-level unprecedented views.  “The views are outstanding,” said the hotel sales manager.

The new Wildwood Hotel also will abound in prime meeting areas, capped by their new Independence and Summit rooms and will sport a spacious lobby.

A few other future plans are in the works for the Wildwood that are under review by city development officials.

Part of the Wildwood Lodging and Casino Network

The new Wildwood Hotel isn’t the only lodging facility the casino will operate.  It still will run the Gold King Mountain Inn.  “All of our properties are intertwined,” said Ciampa. 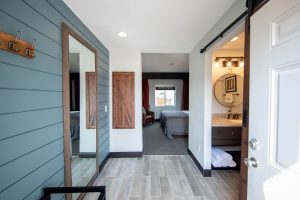 The new Wildwood Hotel is touted as a great getaway for visitors, gamblers and outdoor recreation buffs, who want to enjoy a several-day stay.

This is one of the main goals of business and city leaders in their push to turn Cripple Creek from a day-trip into a multi-day stay hub.

“They are all very excited about this project,” said Ciampa.  “There is so much to offer in this area.”

Wildwood operators see the project as a great hub to partake in gaming in the town’s main Las Vegas-style casino (touted as the highest casino in the world) and to frequent other amenities in the region.

“This is really the right product for this area,” said Ciampa.  “We really want people to make reservations.”

As part of their pre-opening enticement (until April 15), the Wildwood is offering future hotel-goers a chance at winning $500 for every entry booked. (0ne entry for every night a person books a room.) To  make reservations, call 719-689-2600, or visit WildwoodCasino.net/hotel for full program details or information about the new hotel.