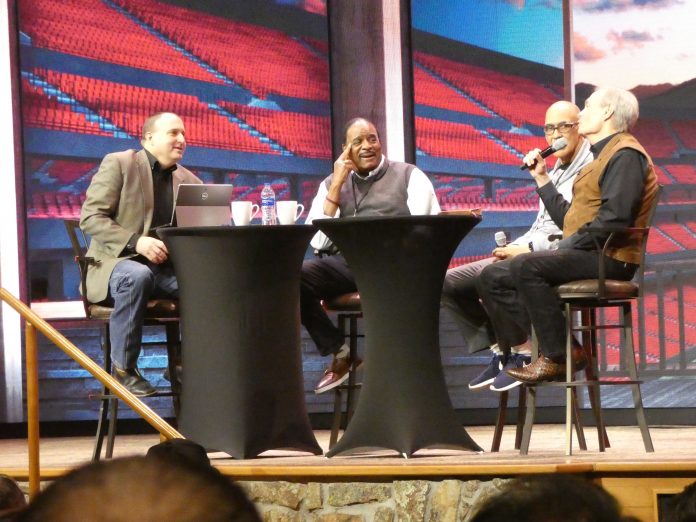 The two sports celebrities came to town to give speeches at the conference.

This year the event took place in person and it was live streamed on the Charis website. The event started on March 11 with Dungy speaking at 8 p.m. The conference continued the next Friday morning with a worship session then another speech from Dungy.

More events during the day took place including a musical presentation by David Hinton and more worship sessions. One of the highlights occurred when Dungy, Brown, and Charis founder Andrew Wommack held a panel session. They addressed questions from the audience. 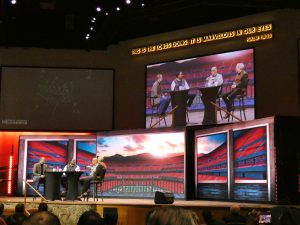 One question that gained a few laughs involved who (of the three panelists) would win in a 50-yard dash race. The general consensus was that Dungy would win because he is more fit than Brown. Plus, Wommack was wearing cowboy boots.

A more serious question brought about a discussion of tough times in their lives. Brown told a story about how Dungy’s life changed when he was fired from his position as head coach of the Tampa Bay Buccaneers.

“He thought the Lord said that this was going to be a stop for them,” Brown explained. “When he got fired, he was asking God what was next. Two days later he gets a call from the owner of the Indianapolis Colts who left a voice mail message saying, ‘can you please give me a call when you have an opportunity? We have got a job opening here. This is not an interview the job is yours. Don’t have your agent call me we don’t need to negotiate money. Money is not an issue the job is yours.’ Two days later! That’s how it unfolded and of course the rest is history.”

Wommack then talked about how he has been able to hold his faith through tough times in his life including his stint in the Vietnam War. He recalled an issue where he thought he was going to “go to heaven” when enemy troops stormed a building, he was in. Wommack said several shots were being fire at him, but he kept his faith during the incident. 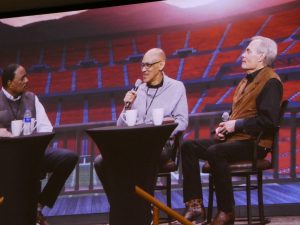 Wommack then talked about how he had to push through when he first started up the Charis Bible College. “When the Lord called me, I had burned all my bridges behind me I had no alternative,” Wommack said. “It was either do this or die. So ,I have never considered quitting because I couldn’t. I didn’t have any other options. You guys had options; you were talented in other ways. There were no options for me so I just mowed through.”

During the panel discussion, Brown and Dungy also brought up their new video series called “Beyond the Game.” The two sports figures plan to air their new series on a YouTube channel starting in May.

As for future expansion plans, Wommack also announced a plan to pay off the remaining $28 million owed on their parking garage by the end of the year. After the garage gets paid off, Wommack said that the next step is to build student dormitories starting in May 2022.

The event also featured more worship sessions and a presentation by Billy Epperhart, called “God’s Laws of Wealth.” The conference concluded with speeches by Brown and Wommack.