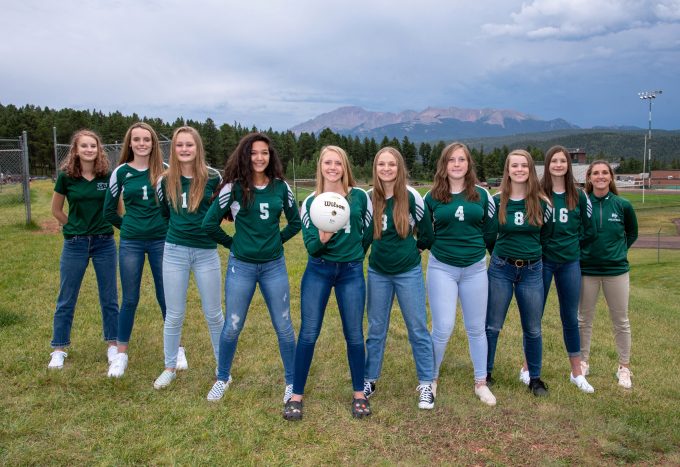 The Woodland Park High School Volleyball team hit the courts for the first-time last week since they won their league in fall of 2019.

This season, the Lady Panthers hope to continue their success they have had for the last two years.

In 2018, the girls finished in second place in their league with a 7-1 record and then lost in the playoffs to Cheyenne Mountain. Last year they earned an 8-0 league record and won their division and made it to the second round of playoffs. They then were booted from post season play after losing to Thomas Jefferson.

This season, the girls so far have started out undefeated with two victories on their belts. They started their season with a victory in three matches against Air Academy on the road last Tuesday. They then went to Harrison and defeated them by winning three matches and losing one.

According to the team’s coach Stacy Roshek, the girls are in a new league this year. She said that they will still be playing teams they have played for years, but they will also be challenging some new opponents.

She also said that they have a different team this year than they have had in the past. “We are going to be a little different we have a stronger defensive team this year than offensive,” Roshek said. “I think our serve/receive, defense, and digs will be the main difference in our game this year. We are pretty strong on that end. But, we have some good offensive threats as well we just have to work on timing with everybody with new setters and new middle. We are working some kinks out right now.”

Roshek also set that the team is good on serving this year. And, the outside setters is another position where the Lady Panthers are strong.

The coach said that there are a few things that the team can still work on to continue winning. “I think we need to have confidence in each other,” Roshek said. “And realize we are all playing on a team and we all know what we are doing. We just have to rely on our teammates that they are going to do their job. We just have to have confidence and know the ball is going to be there when we are there.”

The coach also said that she would like to see the team work better together. Overall communication on the court is another place where the team can improve.

Last year the team lost two seniors and they have a younger team as a whole. This season the girls only play 14 games instead of the 23 they normally play.

This Tuesday, the girls play on the road against Canon City and then they take a week off from matches during spring break. The Lady Panthers continue their season next week when they challenge Widefield, Mesa Ridge and Palmer.

Normally, the boys would hit the soccer field in fall but their season was changed this year due to COVID-19 restrictions.

In the beginning of the school year, the Colorado High School Activities Association (CHSAA) at first suspended most fall sports and mandated that they be played during a special spring sports season.

However, after many parents pushed for a season, they decided that they would allow schools to have football in the fall if they chose to do so. But, fall sports like boys’ soccer and girls’ volleyball were still mandated to play during the special spring season, which started competitions last week.

The soccer team played their first match last Thursday when they played a road game against Ellicott and lost 4-2. According to the team’s coach Andrew Pappadakis, the metro league the Panthers play in expanded so they will be playing a number of  new teams.

Pappadakis said that this year a majority of team players are new to the game. He said that out of 11 players, only two are experienced and have played on the team before. However, with a vastly new setup this season, smany athletic kids who haven’t played soccer before chose to be on the team this year.

“We have a good group of athletic kids that are essentially sponges right now,” Pappadakis said. “So that’s a really good, positive coaching point for me. Most of our players are learning the game and learning their positions. The level we compete at is beyond recreational so I’m trying to bridge that gap. But everybody is positive, the attendance is outstanding and everyone has a growth mindset attitude. Everything points in the right direction with the exception of experience.”

This year the Panthers will be playing a shortened schedule of only 10 games. The playoffs will be determined by the best out of six-league games.

The coach said that the team still needs to improve in a variety of phases because they have many that are playing for the first time. He also said that due to the team’s inexperience that they might not match up well with many of the Colorado Springs school that have teams full of players that play every year.

This Tuesday, the Panthers take on the Dolores Huerta Prep Scorpions on the road. They then have another away game on Thursday against the 0-1 Palmer Terrors.