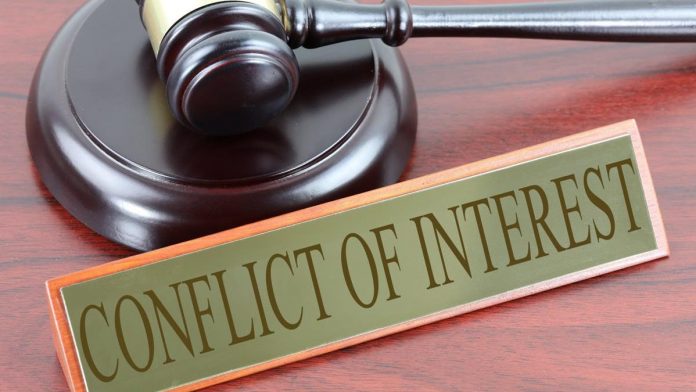 The Woodland Park City Council spent a great deal of time last week debating a stipulation in the  charter regarding an elected leader’s responsibility to step away and not vote on issues that may involve a conflict of interest.

This has been a touchy subject with many local governments in the region.

It hit home at the March 18 WP Council meeting, with a close 3-2 vote that didn’t permit Councilman Jim  Pfaff, who has been the center of much controversy lately, to partake in considering an ordinance regarding a proposed moratorium on previous approved rules  to boot recreational vehicle dwellers out of RV camp sites for extended stays.

This section reads: “In the event the Mayor or any Councilman, or any member of his immediate family, has or could potentially be construed as having a conflict of interest, said Mayor or Councilman shall declare such interest. If the Mayor or any Councilman fails to declare such interest, the remaining members of the Council shall determine by a majority vote whether said interest does in fact constitute a conflict of interest.”

This debate centers on a new 12-month moratorium on the applicability and effective date on definitions contained in previous city decisions regarding recreational park trailers and recreational vehicles. The main issue deals with a current 180-day limit on peoples using their recreational vehicles and trailers as permanent housing units at designated sites.

Councilman Jim Pfaff resides in an RV campground that would be affected by possible ordinance changes.  Pfaff refused to recuse himself in the matter.

City Attorney Geoff Wilson notified Pfaff that his participation in the issue could be perceived as a violation of charter section 3.14. Pfaff still refused to recuse himself.

Wilson acknowledged that the provision in the charter is stricter than language in most city charters, but that since it exists, it must be taken seriously. Wilson said, “The fact that this is before you tonight are an illustration of how the Woodland Park charter is more stringent than the state law in the area of conflict of interest. Ordinarily this would be a private matter between the city attorney and the council member.”

Debate raged on over Pfaff’s personal rights to vote and adhering to the city’s charter as it is written.

Pfaff continued to insist he has no conflict of interest, while others on council insisted his residency in the RV campground could be perceived as such and he should recuse himself.

Council member Stephanie Alfieri argued the council had no authority to “strip”  Pfaff of his right to vote. Wilson snapped back that, “Respectfully that is not correct. The charter provision provides that you may do precisely that.”

Councilman Robert Zuluaga attempted to defend Pfaff’s right to refuse to recuse himself.

He said, “To me, this crosses over the line of free will and personal responsibility for each of us as council members. So, I struggle with of taking this part of the charter and saying that I have the right to say to somebody else on council you don’t have a right.”

Council Member Kellie Case asked Wilson how we got here. She pointed to other instances when a council member or mayor has notified council of a possible conflict of interest and asked council whether or not they should recuse themselves. Wilson explained that there could be legal consequences regarding the failure of council members to recuse themselves,  if a decision is challenged in court. He said, “Someone could go to court and get the matter thrown out if they wanted to go to the trouble of doing all that.”

Mayor Pro Tem Hilary LaBarre weighed in with her take on the issue. She said, “Here’s the perception. You live in one of the parks that is affected by this rule. If it passes you will only have 5-months to stay there. So, you would be required to pick up and figure it out. So, if you vote to not allow the 180-day rule. How do you think people would perceive it if you vote against it?”

Ultimately, most on council was convinced that Pfaff should recuse himself as there is a definite case of perceived conflict of interest.

A vote was taken and Pfaff was not allowed to vote on the new moratorium ordinance. The vote was 3-2. Zuluaga and Alfieri cast the two no votes.