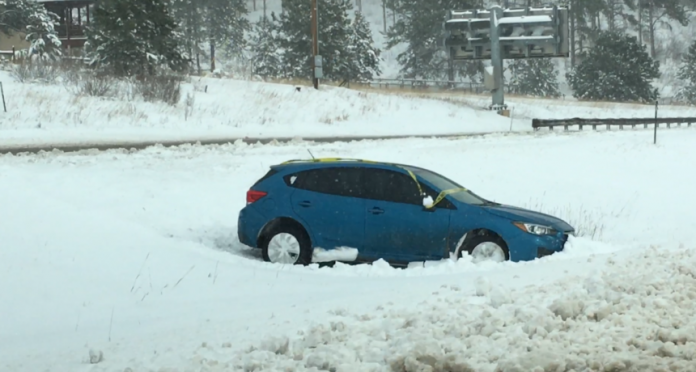 First-responders and law enforcement grapple with spree of accidents

A rather vicious snowstorm struck the Ute Pass region late last week, catching motorists off-guard and leading  to a spree of accidents and lengthy traffic delays.

Weather forecasters knew it would snow, but many news stations were only calling for three to five inches in Teller County. The Teller storm bombardment, which hit hard throughout Thursday, shattered these predictions much earlier than expected, while hardly impacting other low-land areas, such as Colorado Springs and Pueblo.

Typical for this time of year, the storm followed a several-day warm spell, when some hikers and locals were spotted in short-sleeve shirts.  Mother winter, then took a mean turn for the worst late Wednesday.

The snowstorm hit the mountains earlier than many believed it would. By late morning Thursday, the county had experienced well more than five inches,  and the storm did not quit.

By the next morning,  snow totals in Woodland Park exceeded 10 inches. Other areas in Teller reported snow totals of over a foot.

Due to the timing of the storm and the varied conditions in the area, many people were out on the roads as school was in session and many people were working. With the snow coming in as fast as it did throughout the day, motorists experienced dangerous icy conditions.

There were reports that Hwy. 24 between Manitou Springs and Woodland Park was very icy and snow packed. The poor conditions on Hwy. 24 were also found west of Woodland Park through Florissant and Divide. A post on social media also claimed that the conditions were really bad on Hwy. 67 between Woodland Park and Deckers.

The worst roads were most likely the routes heading to Cripple Creek between Florissant and Divide. One motorist said Hwy. 67  between Cripple Creek and Divide was very treacherous by late Thursday afternoon, with traffic nearly coming to a standstill and motorists only traveling 10 miles per hour for much of the stretch.

On Thursday, one  news station reported that the average speed on Hwy. 24 between Woodland Park and Divide had dropped to 30 miles per hour. Visibility was almost non-existent and main thoroughfares remained snow packed for  much of the day.

With the icy, snow-packed road conditions all across the county, first responders had their hands full dealing with a number of car accidents. According to Teller County Sheriff Commander Greg Couch, at one time there was at least three accidents on Hwy. 24 between Green Mountain Falls and Divide.

“Speed was a factor,” Couch said. “It is going too fast for road conditions. Everyone knows that there is a speed limit but you have to try not to go the speed limit when the road conditions are bad. All day we knew it was going to snow and once it starts snowing you have to allow at least a couple of hours for the plows to catch up with that situation with snow removal and chemical application. That is the most dangerous part of a storm as far as crashes are concerned is when it starts because the plows start working when it starts snowing, but it takes them a couple of hours to clear Hwy. 24 of snow and get the chemicals down. The majority of the accidents occurred in that two or three-hour window. Speed is a factor and jerking the steering wheel and stabbing the brakes will get you every time.”

While he was assisting a motorist with an accident, he said that there were several cars that were driving past the first responders at dangerous speeds of 50 to 60 miles per hour. He said that people should reconsider entertainment trips and stay home when the weather is bad.

Couch also emphasized the fact that vehicles should be well-equipped when driving in the mountains during a snow storm. “People don’t think about their tires, but you need to have good all-seasoned tires to drive up in the mountains,” Couch explained. “A lot of people that I saw that were involved in accidents had bald tires and that’s just not going to work out for you. Another thing is that once your car rotates more than 12 degrees from center, there is no way you can recover from that.”

Couch said that when snow comes, people need to make sure that all of their windows are clear of snow including the rear-view mirrors on the outside. He also recommends that people go as slow as they need to go to be safe.

The commander also said that people should check their car to make sure the wiper blades are good and that they have plenty of windshield washer fluid. “Just do a little bit of pre-trip maintenance and pre-trip checks,” Couch said. “You don’t get on an airplane without the pilot doing about 30 minutes- worth of pre-checks. So why would you get in your car and put your life in your own hands without checking some things out?”