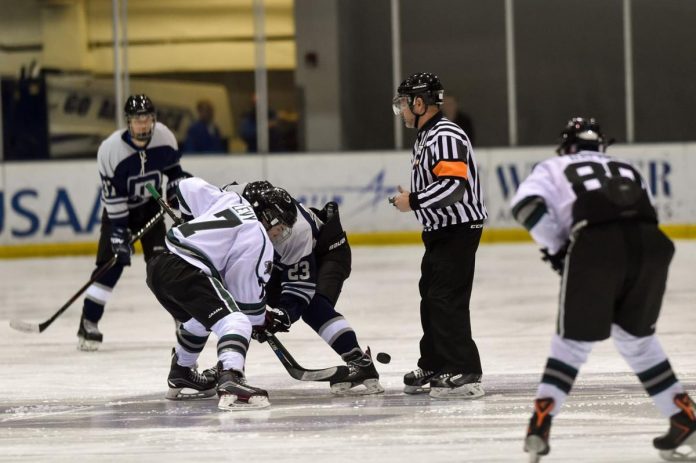 2021 Season of WP Icemen Coming to a Grand Conclusion

After taking a two-week quarantine break, the Woodland Park Panther hockey team recently returned to the ice for some hefty competition.

But unfortunately, the forced delay had a little effect on the WP Icemen.  However, the team showed great signs of a rebound.

They started off a little rusty and lost their first game back from their forced break 9-3 to Pueblo County on Feb. 25. But then the boys got their rhythm back and started winning games again. On Feb. 26, the Ice Panthers beat Coronado 5-4. And then last Tuesday the team dominated over Coronado again 6-5.

Currently, the team has a 4-2 record and their coach, Travis Seabolt, says that they have a chance at making the playoffs. At the time of this writing, the boys had four games left and one playoff spot that they could snag.

According to the coach, hockey is broken down in three leagues across the state. The top positions in the three leagues will all earn spots, leaving one game left that will go to the next best team.

As of now, the three top spots are pretty much decided, but the Panthers have a shot at getting the fourth spot. The Panthers must keep winning and rank better than the other two second place teams in the state.

The Panthers play Monday, Tuesday and Wednesday this week, and team players and fans are hoping for victories in all of these ice contests. “We’re basically fighting against either Colorado Academy or Kent Denver in the north division or Battle Mountain and Crested Butte in the mountain division,” Seabolt said.

The coach said that the team has worked hard to come back after their quarantine. He said that the eight seniors on the team have stepped up as leaders and as mentors for the younger players. And, he has also seen his freshman players improve.

Seabolt said that the boys’ primary goal for this week is just to stay focused.

“We don’t have any practices left it’s just game, games, games,” the coach said. “There’s not a lot of opportunity to work on fundamentals or team strategy. Honestly, they just have to get down and grind through the next week. They need to play what they have been taught and just stay disciplined. And they need to be aggressive and show up to win every night. The mental side of it is really where it is going to be from here on out.”

The coach still touts brothers Parker and Trace Taranto and Mikael Romero as the team’s stars, but other younger players have also been rising in the ranks.

“I’ve got a freshman Gabe Denio and he is coming to his own and has been on fire,” Seabolt said. “My whole second line, basically it’s Denio, Brennan Morgan, and Tyler Thime, those guys honestly have been my most productive line in the last week of games. They just have really come into their own, are working well together, and have done really great things. Our defensive core has really been stepping up too. I’ve got a freshman Westin McCorkell who has been kind of a diamond in the rough, if you will. He came out of nowhere as a freshman. He has really stepped up and put some points on the board himself.”

The fate of the Panthers will not only be decided by their play this week, as Lady Luck must be on their side. Their playoff prospects also hinge on how the other teams across the state vying for the fourth post-season seat fare this week. All of the Panthers’ final bouts on the ice are available to watch via live stream on the Woodland Park Hockey Association Facebook page.