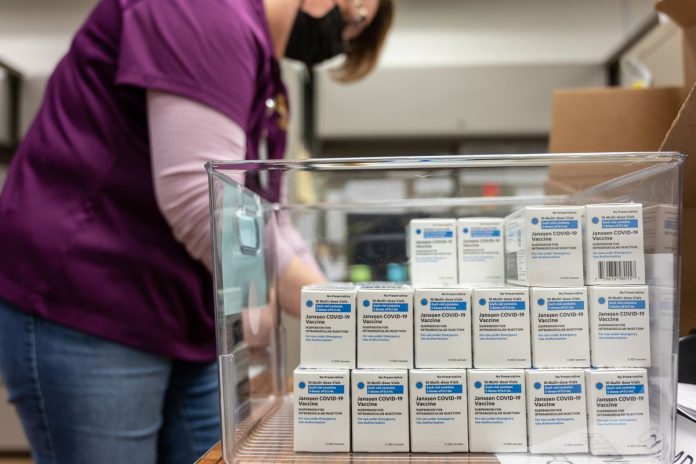 Teller County’s COVID-19 numbers are on the decline to the point that residents and business operators should experience a decrease in restrictions in the near future.

In addition, the county is making sold strides in its effort to vaccinate more citizens

That’s according to the latest update report, given by county officials at last week’s commissioners meeting.

All of the statistics that the state health department uses to designate a county’s color level on the restriction dial have stayed comfortably in the Level Blue locally. The only exception is the rate of hospitalizations.

As vaccinations in the area increase every week, county officials may soon look towards changing to the next lower green level.

According to the latest statistics, Teller County has seen 1,285 cases and 15 deaths since the novel coronavirus first struck exactly a year ago. Woodland Park has still reported the most cases with 790 or 61 percent. Florissant has had the second most with 205 cases or 16 percent.

Other towns in the county have had lower numbers with Divide sitting at 189 cases or 15 percent. Southern Teller remains on the bottom of the list with Cripple Creek reporting 75 cases or 6 percent, and Victor has recorded only 23 cases or 2 percent.

Since the virus struck, the county has had 91 people hospitalized, which works out to 7.08 percent of the total number of cases within the county. According to County Administrator Sheryl Decker, the seven-day case count is now 78.9 cases per 100,000.

“That is the one-week cumulative rate that the state is judging us on,” Decker said. “We have been right on the line (between) blue and yellow and now we are dropping into the blue.”

The percentage of positive tests coming from those who have been tested is 3 percent. However, Decker also said that the county’s two-week hospitalization rate has been sitting in the yellow range.

“If one person goes to the hospital in two weeks we turn to yellow,” Decker said. “It’s a pretty tough one to change.”

According to Decker, the next step would be to go to the Protect Your Neighbors Level Green, but the county has not yet looked into applying for that next step. The county administrator said that moving to the green level is more arduous of a process then their recent designation as a blue area.

The state requires that eight specific conditions are met before letting anyone move to the green level. As of now, there are not currently any counties that have passed all of the requirements to move to green. Decker did say that the county will be looking into the requirements for that next step soon.

During the past several weeks the Teller County Public Health  Department has been working closely with medical agencies in the area to administer vaccinations. The health department has had several clinics over the past two weeks at prime locations in Woodland Park and Cripple Creek including the Shining Mountain Golf Course and the Ute Pass Cultural Center.

When the county first started administering vaccines, they were giving out Moderna vaccinations. Last Friday, the county dished out its first batch of Johnson and Johnson vaccines that only require one dose.

The vaccination operations last week mainly took place at the Shining Mountain Golf Course with the help of several volunteers. Anyone who wishes to have a vaccine is asked to sign up on the Tellercovid.com website. If the person is currently eligible, the health department will contact them and have them sign up for an appointment at a certain time and place.

“Currently we have not sent out random invites for people to just show up here,” the county’s interim public health director Martha Hubbard said. “The rationale in why we are making people have appointments is because we don’t want to have a line out there and then have to tell them ‘sorry we’re out.’ We don’t want people coming three hours before our vaccine clinic thinking they are going to get one and then maybe not. We have been very deliberate here in Teller County that when we get the vaccine, we push it out through Tellercovid.com.”

As people were arriving at the site the Teller County Sheriff’s Posse was guiding traffic and they asked that people wait in their cars until five minutes before their appointment. Next, people check in at the desk, get signed up and then they are told which nursing station to go to for the vaccination.

After getting vaccinations, if people don’t feel well there is a special station set up to monitor them. If they feel fine, they head to another area where they are asked to sign up for the Center for Disease Control’s (CDC) safe program that tracks if people getting the vaccines have any symptoms afterwards.

Lastly, those getting vaccinated have to wait in another area for fifteen minutes before they leave to make sure they do not experience any symptoms. Several agencies collaborated to make the vaccination clinics happen including UCHealth, Peak Vista, and the Northeast Teller County Fire Department.