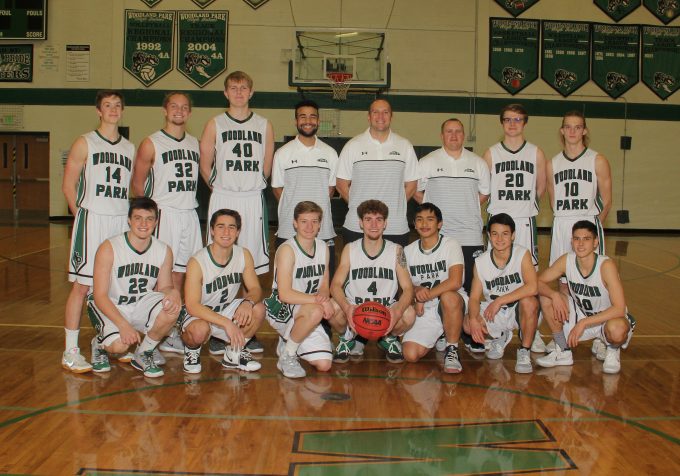 The Lady Panther hoopsters started playing games again last week after they took a brief pause due to a possible COVID-19 exposure.

But the halt in b-ball action has taken its toll, and it’s unlikely the girls’ b-ball team will see any playoff action this season.  However, that outcome is  not surprising, as they are a fairly young team and have good prospects for the future.

Two games were recently cancelled and the girls didn’t go out on the courts for a week and half. That definitely hurt their momentum.

The hoopsters started off their season by losing two matches and then winning two games. But then following two subsequent losses in early February, their season was temporarily halted due to the pandemic.

After their break, the ladies played Salida on the road last Tuesday and lost a close one 38-30. On Thursday, they held their first home game in three weeks, and fell to Buena Vista by tight  32-27 score.

According to the team’s coach, Craig Macari, it has been rough on the team taking a break from matches and practices, and then going out to play three or four games in a week.

“We are getting worked back into the swing of things,” Macari said. “My kids do not give up. I think we were down 14 goals going into the fourth quarter last night (Thursday). And with thirty seconds left in the game we had the deficit down to three points and we had the ball. We just couldn’t get over the hump. So, they are coming a long way and doing a lot of great things on the floor. Unfortunately, we just dug a hole too deep that we couldn’t jump out of.”

The coach cited their passing game and  lay-ups as areas of needed improvement. This year, the young  team has only fielded  five players that have played varsity b-ball previously. During the last game, the coach started one senior, one junior, and three sophomores on the varsity team.

Senior Kassidy Cargill has led the team offensively this year by scoring a total of 82 points and 52 rebounds. Sophomore Bella Slocum is the next best in several categories with 47 points scored and 40 rebounds. Plus, she is the team’s leader in steals with 37.

After playing three games last week, the Lady Panthers move on to play four more games this week.  These were rescheduled from earlier in the season due to the mandatory quarantining of teams.

On Wednesday, the team takes a short trip down the mountain to play the 4-2 Manitou Springs Mustangs.  Then on Friday, the hoopsters end their season with a home match against the tough 6-2 Lamar Savages.

Currently, the Ladies have a 2-6 overall record.  With their 1-4 league record, the team is in 10th place in the 3A Tri-Peaks League.  Even if the ladies win some key matches this week, it will still be tough for them to score a spot in the post season.

The male Panther hoopsters have fortunately fared better this season than their female counterparts.

Luck has been on their side because the boys’ b-ball team has not suffered from a forced break due to a COVID-19 exposure. They are one of the few winter sports teams that has been spared this dilemma.

However, the team has had to cancel and reschedule three games this year due to problems with exposure to the epidemic  that their opponents have encountered, including a game last Thursday against Buena Vista. The Panthers’ overall record as of this writing was 4-5 with a league record of 3-4.

The hoopsters are in seventh place in their 3A Tri-Peaks league.  According to  coach John Paul Geniesse, they still have a chance at making the playoffs if they win some key league matches this week. “We still have five games left and two out of those five are against high-ranking teams,” said Geniesse.  “If we beat Manitou Springs and Buena Vista this week, we will move back up in the rankings.”

For the majority of February, the boys kept a streak of winning one game and then losing the next one. The boy hoopsters did have eight days earlier in the month without games before returning to action on Feb. 19, when they  lost to Colorado Springs Christian 64-48 on the road.

On the next Saturday, the boys played Banning Lewis Academy at home and won 59-52. Last Tuesday, the Panthers continued this cyclical streak, losing to Salida at home 80-65.

The coach said that he likes how the team has been playing and he is optimistic about the prospects this week, as they face a pivotal part of the season. “We are scoring with the ball better than we were in the beginning of the season, which is good,” Geniesse said. “We are defending it pretty well at times, but there were some stretches there where we struggled to get some stops. But overall, I think the makeup of our team is really good. We have given ourselves some chances in almost every game. We are cutting down our turnovers right now and we are starting to shoot the ball better from the free throw line.”

The coach believes that all members of the team have showed signs of  improvement.

For explementary performances, Geniesse mentioned the Ciccarelli brothers, Tyger and Sonny, who have played quite well recently. Sophomore hoopster Sonny is currently leading the team on statistics with 134 points and 18 assists. His older brother, senior Tyger Ciccarelli, has also been impressive by putting up 60 points and 20 rebounds, and leading the team with 15 steals.

According to the coach, freshman Caden Howard has also risen up in the ranks on the team with 68 points scored and 10 rebounds. Sophomore Jackson Dornsbach has been good defensively with 25 rebounds and four steals. Freshman Bryce Broeker has also put up some stellar numbers with 53 points and he leads the team in rebounds with 39 so far this season.

Geniesse did say that the team needs to improve on defensive side of the ball, along with snagging more rebounds.

The Panthers play four games this week with the first two being home matches; one on Tuesday against the 1-6 Ellicott Thunderhawks ,and then another game on Wednesday versus the top-notch, undefeated 10-0 Manitou Springs Mustangs.

The team returns to play on Friday with a road game against the 3-6 Lamar Savages. Then on Saturday the Panthers will play the game rescheduled from last week against the tough 6-2 Buena Vista Demons at their home court.