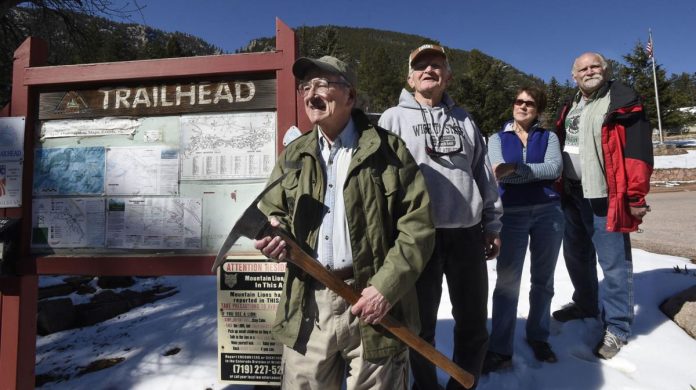 This has become a brutal week in the Ute Pass/Teller High Country region.

Earlier this week, Woodland Park Mayor Val Carr succumbed to the coronavirus infliction, following a tough struggle.  His memories were  highlighted at the recent council session (see related story), as leaders and citizens now deal with this loss.

Then on Thursday morning, we lost another great community icon, Dick Bratton, who passed away outside his home in Green Mountain Falls. Bratton, who was 84, was an absolute legend in GMF and in the region. Plus, on a personal level, he had an incredible sense of humor and embodied the best of the friendly, colorful characters we associate  Green Mountain Falls with.

His list of accomplishments and community involvement is almost too much to  list, namely his role as a former mayor, trustee, planning commissioner, chamber leader; and of course, regional trails champion.

In fact, anyone who has hiked a trail in GMF or the  Ute Pass area probably needs to thank Dick for enjoying this experience. He played a key role in developing these routes and promoting the area, and in garnering public resident support for GMF’s emergence as an outdoor mecca. He also laid the ground-work for the coast-to-coast American Discovery Trail, which has a key link in the lower Ute Pass and in much of Teller County, largely due to Dick’s work and patience.

He even served as a host to people traveling for months on this route across the country, often letting them stay at his home for a few days to rest their legs.  I once dubbed him as the local trails’ guru, a title he definitely deserved.

Community involvement was a passion for Dick Bratton, a distinguished Air Force veteran.

And it only seems fitting that a day and a half before his death, he was at in again: Making a public appeal at a local trustees’ meeting for hiker safety with the Catamount Falls route in the winter, in assuring that proper signs were placed to warn visitors of the icy dangers they now faced.

Plus, Dick urged the trustees to proceed with caution in their bid for a paid-parking system to better control crowds. In revering his memory, I hope our leaders will take his words seriously, as Dick really had a good sense of the pulse of the community.  Gaining community consensus was a key motivator for Dick.  In recent months, he became heavily involved in forming the new Fire Mitigation Committee.

Probably no local resident attended and participated in town meetings more over the last few decades than  Dick Bratton, who also supported many of the community needs with his own money.  The Bronc Day celebration was practically dead years ago, but was resurrected by Dick and a handful of  chamber and town leaders.

When hardly anyone attended the parade, Dick would do a little Old West-style performance to get the people involved. The event then rebounded and vastly expanded, and last year, it became one of the few festivals to survive the pandemic epidemic.

This death really hurts bad for me, as I knew Dick very well personally.  I met him years ago, as part of a ski club, and he actually coached me during a ski race.  Nope, I didn’t win, but sure learned some key pointers. Plus, he attended my wedding and the eventual funeral ceremony for my former wife.

Besides his amazing community spirit, Dick  Bratton was an amazing skier, and founded the Teamski race organization (that tried to get people together in the winter both competitively and socially). As many know, Dick boasted quite a theatrical talent and had an amazing singing voice. His role as the MC for the Bronc Day festival was well appreciated.

Dick’s role in the planning arena also is legendary, as he helped with several master plan projects.

But  Bratton’s reputation  goes well beyond the boundaries of Green Mountain Falls. He was highly regarded in government and recreation circles across the state.

But what I remember most was his style and  enthusiasm. He could deal with adversity and cope well with people who disagreed with his views by presenting the big picture.

More importantly, Dick Bratton served as a prime community ambassador. Dick would warmly greet people coming into his second home, The Pantry restaurant, and turn them into friends within 20 minutes.

I would like to conclude with a few comments from Rocco Blasi, who became chairman of the town’s former trails committee, and is now a leader of the Friends of Ute Pass Trails group.

“He (Dick Bratton) was a wonderfully encouraging mentor.  Dick was a gentleman from the old school, his word was his bond.  It is no surprise that he continued to give until the very end.  The night before he died Dick Bratton could be found – you guessed it – participating as a member in the town’s fire mitigation committee, a group formed at his urging.  His loss leaves a deep void in our community.  He will be remembered for his charm, dignity, and selflessness.”