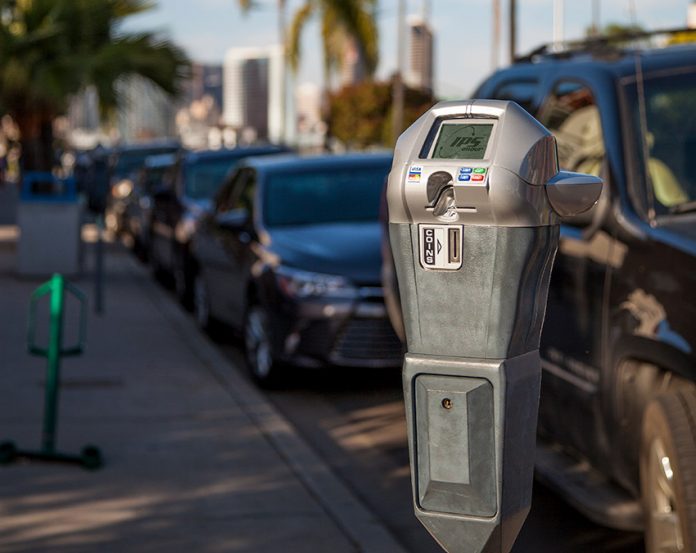 In a bold move and one bound to generate mixed opinions and future debates, the Green Mountain Falls Board of Trustees unanimously signaled the green light last week for opening the door for a paid-parking system throughout the downtown and main core of GMF.

If successful, GMF is poised to become the only town in the Ute Pass/Teller region that will charge hikers or visitors for extended stays. Local residents, and those who frequent eateries/bars and shops for two hours or less, won’t be  impacted. The maximum daily amount for parking has been proposed at the $34 level.

More specifically, the board approved the recommended plan of consultant Jonathan  Cain, the assistant town administrator for Idaho Springs, calling for a pilot program to debut this year. Cain proposed only trying this initially during the prime season from Friday through Sunday and only during the prime daylight hours from 6 a.m. to 4 p.m.

Similar to what he helped implement in  Idaho Springs, Cain cited the effort as a way to handle visitation and tourism, and not to generate big dollars. “It is to be welcoming for our visitors. We use this as a tool  Your contactor can be flexible,” said Cain, when explaining the Idaho Springs model.

The program, though, could generate a decent  amount of dollars and cents for GMF, monies that would have to be shared with a contractor.

In rough figures presented, Cain estimated that the town could generate between $100,000 and $400,000 a year in revenue, depending on whether it was done on the weekends, seasonally or throughout the year. Altogether, the consultant has outlined a possible allotment of 250 parking spots or stalls in the  main core of town, mostly off Ute Pass Avenue.

However, many more details still need to get finalized, such as the design and implementation of the system, which will be managed by a third-party parking contractor. No conceptual renderings of the proposed system and how it would look were presented at last week’s Zoom meeting.

“We are not talking about meters on every corner,” said Mayor Jane Newberry, following last week’s meeting. “I am envisioning a kiosk system, similar to what they have in Manitou Springs.” But the  mayor said these specific details will get handled by the contractor.

Newberry sees the parking areas around the pool and across the church, where cars are often crammed during the weekend, as the prime targets.

The main idea of the plan is to manage the visitor traffic better and to charge hikers, outdoor buffs  and visitors who may want to spend extended hours in town. “It really is a quality-of -life issue,” said the mayor.

Throughout last week’s discussion, Newberry stressed that the issue comes down to managing parking and crowds better, and not ‘should we or shouldn’t we’ have paid parking.

“The cat is out of the bag,” said Newberry, in describing the popularity of Green Mountain Falls as a hiking paradise, with its lineup of unique trails and access to Catamount Falls and the North Slope area of Pikes Peak.  The addition of Dewey Mountain has greatly added to this appeal. And this summer, the town will feature a new James Turrell Skyspace attraction, featuring more trails, northeast of the downtown.

The mayor and other trustees also expressed a desire to convert “hikers into consumers” locally and get them to frequent restaurants, bars and shops more.  Trustee Katharine Guthrie indicated a paid-parking system would get hikers to appreciate their overall experience in town better.  “They would be more invested in their experience (in Green Mountain Falls, with restaurants and shops),” said the trustee.

Overcoming a volley of opposition

But the plan must undergo a considerable amount of vocal opposition.  “They are Dictators,” blasted one local business operator, who contends the timing of this plan couldn’t be worse, with most business experiencing difficulties associated with the pandemic.  “Why are they so anti-business?”

The reaction from local business owners to this idea has been less than enthusiastic.

A petition  has already been presented to the board, signed by close to 100 residents, opposing paid parking.

At last week’s hearing, these anti-paid-parking views were echoed by a score of speakers.

In some of his final public comments as a local resident and community leader, Dick Bratton (who passed away on Thursday, see related tribute), urged town leaders to move slowly in the paid-parking arena. “The paid-parking system concept lacks a business plan,” said Bratton, at last week’s meeting. “What is the cost to set up the program. It has so  many demands on the contractor.  I wouldn’t do it if I was a contractor.  Let’s go cautiously Let’s try the (trails) ambassador program.”

Similar sentiments were expressed by Rocco Blasi, chairman of the town’s former trails group. He encouraged town leaders to put the issue up for a citizens’ vote. “It would fundamentally change the character of the town. I am urging caution,” said Blasi.

The co-author of the recent petition drive, Judith Piazza, advised the board to try to come up with better signage initially and expand its hiking ambassador program, before requiring paid parking. “I am urging caution and slowness,” said Piazza.  “Give some of these processes a chance.  I would want to extend these other possibilities first.”

The resident fears that If they start the paid-parking system, they not be able to retreat.

Another resident, Kathleen Morrow, mentioned the problems Manitou Springs encountered, when it initiated paid parking, and how it altered the town’s quaint image as an artist hub.  Moreover, she feared this could lead to more hikers parking illegally in residential areas in GMF.

But not everyone speaking last week was against the idea of paid-parking, or at least exploring the plan on a limited basis. Todd Dixon, chairman of the planning commission, expressed no problems with a town trying to generate more money through paid parking. He thought it is reasonable to charge hikers a slight fee. Jesse Stroope, the main representative for the Green Box Arts group and the forthcoming James Turrell Skyspace attraction, said he supported the base recommendations made by  Cain.

In their final deliberations, the trustees, with Chris Quinn absent, expressed little hesitancy about moving forward with the preferred option of the consultant.  Of all the trustees, Dyani Loo was a little more hesitant, as she suggested that possibly the town should address its trail signage problems initially.

Two other consultant options were thrown onto the table, with one involving setting up a donation box, to help generate fees. This idea, though, got the boot almost immediately due to the potential for theft.

Give Paid Parking A Chance

Newberry maintained that the town should give the paid-parking plan on a limited basis a try this year. “We have an opportunity here. We have problems with hikers, parking and signage.”

She maintained that this new effort, highlighted by Cain’s work and an earlier survey,  has tried to tackle these issues.

The mayor doesn’t believe the traffic problems will go away. Ever since the closure of Waldo Canyon, the mayor contends that GMF trails are getting loved to death by out-of-town outdoor buffs and people in the region.  She only sees this trend of hikers and visitors increasing.

As part of the plan, the town will have parking ambassadors, better signage and a  future hiking welcoming area. Although it’s too preliminary, the mayor mentioned the  pool area as a possible hiker welcome spot.

One issue that paid-parking advocates and critics agree on deals with the strong need for better signs and trail maps. In the summer months, Green Mountain Falls is flooded with motorists and hikers often confused about access to the trailheads and where they can park.

In early March,  town officials will be presented with a draft ordinance and a request for proposal document, starting the process for hiring a parking contractor to implement their new paid-parking system.  Town leaders hope to initiate the program by this summer.