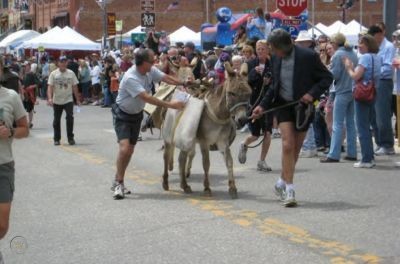 Even with the advent of a pandemic and the canceling or rescheduling of major festivals, and the slicing of city marketing dollars, special events is still a red hot topic In Cripple Creek.

Moreover, he stressed the tradition of this event and the importance the donkeys play in serving as ambassadors for the community. For years, the Two Mile High Club has acted as the caretakers of the town’s donkey herd, and have sponsored the Donkey Derby Days .

Sorensen stated that their annual festival, nearing its 90th year, is on a death row status due to financial cuts made by the city.  And while the veterans and biker rally are only incurring a slight reduction in city funding, he said  Donkey Derby Days is experiencing a 50 percent reduction in city dollars, an amount that he contends could kill the event.

Fair is fair, argued Sorenson, who proposed having equal reductions on a percentage basis for both of the city’s prime summer festivals.

“I am not trying to cast dispersions,” said the club president. “We have to do what we can to take care of the donkeys. We are contesting the allocations that have been made…We are struggling. We are asking for a fair and equal distribution of the (city’s fiscal) resources.”

The club president maintained that the event should receive an extra $3,600, giving the Donkey festival a city commitment of $18,600. Either that or cut some of the money allocated to the Veterans Rally.

“Without some additional support from the city, the event will not happen,” said Sorenson.

These comments ignited much concern among the council, and a few questions from Marketing and  Special Events Director Jeff Mosher.

“We have a pretty strong tradition with Donkey Derby Days,” said Councilman Charles Solomone, who cited the importance of maintaining this event.  Several leaders agreed with Sorenson that the “donkeys are the biggest draw in town.” 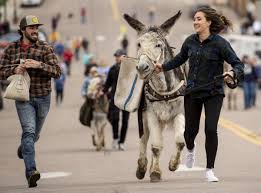 At the same time, the council and staff didn’t believe it is fair to take back money allocated to the Veterans Rally, when this decision was made unanimously by the council in a public meeting. “We are setting a bad precedent,” said Mayor Pro Tem Tom Litherland.

Also, Mosher maintained that the Two Mile High Club needs to submit a more detailed plan, as to how the additional money would be used.  He indicated that more details need to be presented regarding this year’s proposed Donkey Derby Days.

Sorenson conceded that the festival would be toned down considerably, with no parade and donkey races, and  a slight name change for this year’s event. The festival, which will occur on Labor Day weekend, will be called Donkey Days, noted the club president. However, he stressed that it would still be aimed at showcasing the town’s donkeys and the legacy of the herd.

“Why is the increase being requested?” questioned Mosher. “We need a budget as to how we are spending the money.”

Interim City Administrator Paul Harris also chimed in, and noted that the Veterans Rally received a commitment for $28,500, but only if the event occurs and they obtain additional approvals from county health officials and appropriate boards. The Donkey Days gala, though, will receive some city funds, regardless of whether a full festival takes place or not.

Plus, Harris stated that the Veterans Rally is planning on orchestrating nearly as big an event as years past, with the exception of no traveling Vietnam Memorial Wall.

By comparison, city officials cited a much more reduced scope of the Donkey Derby Days.

Still, several council members made it clear they want to support Donkey Derby Days and the Two Mile High Club. Councilwoman Meghan Rozell said her big reservation in supporting the request for reinstating the Veterans Rally dealt with the health of other special events, such as Donkey Derby Days.

The council agreed to table the request and consider its full set of alternatives.

Another possibility deals with not having Donkey Derby Days this year, and putting more resources into next year’s event, which would mark the 90th-year anniversary of the festival. The city also could make a donation towards the welfare of the donkeys, whether it has the festival or not.

The council is slated to make a final decision at its next meeting on July 15.