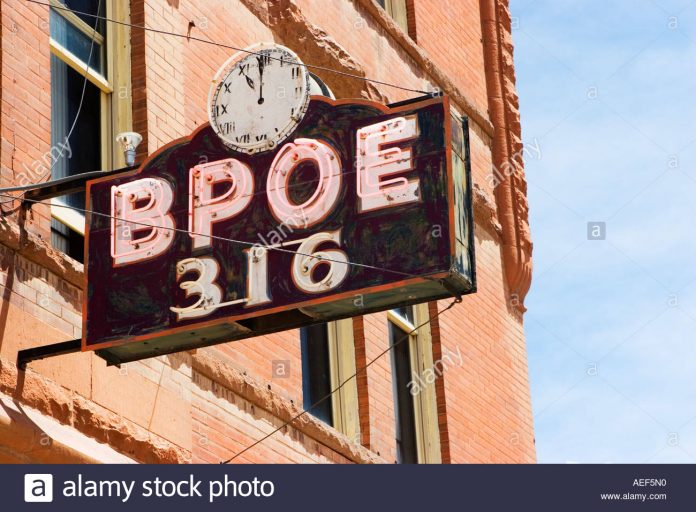 The Elks Lodge is an organization that has maintained strong ties in the Cripple Creek/Victor district and throughout the state and country since the 1800s.

Moreover, the Elks Lodge has survived national and local upheaval, political elections, riots, disasters and various leadership changes. And in recent decades, the Elks has gained a reputation for giving back to the community.

The Elks has been in existence for more than 150 years and has been in Colorado for 135 years. Teller County has two different Elks Lodge organizations, one in Cripple Creek and one in Victor.

Both of the Elks Lodge clubs feature historic buildings located in the downtown district of each historic town.  These building are regarded as historic gems. Both organizations have restaurants and bars in their buildings to help them maintain their facilities.

But the Elks Lodge chapters are more than just clubs that have their own bars and restaurants for social occasions. They conduct fundraisers and give back a lot of money to the communities they reside in. The organization has given money back to children and veterans since they have been established over 150 years ago.

According to local Elks Lodge member and the previous state president Kathy Larsen, the Elks Lodge was recently given an award by the city for the contributions they have done for the area. “Over the last ten or fifteen years just in the Cripple Creek the amount of money in in-kind donations we have given back to the community was close to a million dollars.,” Larsen said. “For a town of our size is pretty darn good. And that doesn’t even include what Victor has done. They are right up there too.”

Larsen also said that the local Elks Lodge has helped contribute to the school clinic in Cripple Creek. They have recently given over two thousand dollars to provide medical aid to local children.

Every year, the Elks Lodge participates in a fundraiser called the Hoop Shoot. During this competition kids go up against each other in a basketball shooting competition. The one child that qualifies locally goes onto other places in the country to compete.

According to Larsen, the local chapter has also donated paperback dictionaries to schools. During the event, Elks Lodge members passed out the dictionaries and gave out ice cream to the kids.

Ever since their early days, the Elks Lodge has continued to support the VA hospital and other programs for veterans. The Elks Lodge both nationally and locally still gives money to local children in the form of college scholarships.

For the last four years, Larsen has been devoting her time serving as the state president for the Colorado Elks Lodge chapter. She said that the last time Cripple Creek had a state president was in 1977.

She is the first state president Cripple Creek has had in decades as well as the first female state officer for the organization. She said that she used her position to encourage Elks Lodge groups in other places to welcome more females into lead positions.

Larsen also said that there is a reason why the Elks Lodge organization thrives in towns like Cripple Creek and Victor that have rather low populations. She said that when the Elks Lodge first formed, it was created by a group of actors who performed in theaters nationwide. Since Cripple Creek and Victor had a vast history of being the prime spot in the area for theater and live entertainment, the towns became a popular place for Elks Lodge members.

The Elks Lodge chapter in the area continues to have many members and they continue to strive and help the community. During most of the events locally, the Elks’ members can be seen with booths set up selling food or other items as a part of their fundraising efforts. According to Larsen, the best way to contribute to the Elks’ cause is to join their club because they are always looking for new members.