Regardless of local theater politics, the show will go in Cripple Creek with a familiar company and a more status quo arrangement with the city.

And under the new pact, the city will take a larger ownership role of Butte Theater happenings and fiscal arrangements. Patrons won’t see quite as many shows in 2020, but the performance runs will increase, according to Mel Moser, the city’s theater manager. Plus, Moser, a well-known local actor who many believe put the Butte on the regional theater map, will play a bigger role on stage

Last week, the city of Cripple Creek finalized their annual contract with the Thin Air Theatre Company (TATC). In addition, the city finalized their divorce proceedings with the nonprofit Butte Theater Foundation, which oversaw the Butte for the last several years.

In a recent meeting, the city council agreed to part ways with the Foundation, citing costs and a desire to reduce duplication expenses. The move ignited a few political sparks and generated much discussion in the community.

But after the dust settled, few public comments have been voiced at recent council meetings. 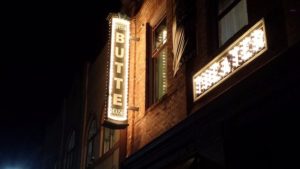 The main change in the contract is that the city will give TATC an annual subsidy of $280,000 a year. The city will then keep all of the ticket revenue and other monies generated from the performances and potential grants.

The end goal is for the city to not exceed $225,000 a year in net theater costs. “It is a good positive move,” said Finance Director Paul Harris. “The city keeps all of the revenue.”

This is the way the city operated for years with TATC, which performed shows at the Butte from 2007  to 2017. Its contract was then rescinded following the 2017 season, when Thin Air couldn’t come to terms with the Butte Theater Foundation. The Foundation was in charge of the Butte from 2017 to 2019.

By comparison, the Foundation tried to make theater at the Butte more self-sufficient, with less involvement from the city. But according to city officials, this arrangement didn’t work and the theater operation plunged into the red at a level that concerned the city. Red flags also were raised over the group’s ambitious acquisition pursuit of the Star and Golden Horseshoe buildings, as part of a $1 million expansion.

The status of this expansion is currently in limbo. Part of the Foundation plan, such as an expansion of the Butte Theater lobby area, may be explored. However, city officials remain mum on these details, saying they were not involved in any previous expansion talks.

During the contract finalization at last week’s council meeting, Moser noted that the city would play a larger branding role. He said the message needs to be relayed that this is the city’s theater. “The city owns the Butte,” said Moser. “The city needs to take ownership.”

Under this arrangement, TATC would still play a role in marketing its various shows that were well received during their previous stint with the city. The theater will also try to have a larger social media  presence on the city’s website.

In most ways, the contract represents the way business was done in the past.

As far as show changes, Moser stated that TATC plans to do four main shows throughout nest year, along with a one-night cabaret performance. Also, locals can expect to see shows that highlight the district’s colorful history more. He indicated more shows may be added in future years.

Rest assured, no future controversy will occur regarding a rerun of the Rocky Horror Picture Show. A debate over this show, done in the fall of 2018, sparked the beginning of a somewhat rocky relationship between the Foundation and the city. Still, the cancellation of the Foundation agreement shocked some community members and theater-goers throughout Teller County.

In email statements, the Foundation clearly stands behind the work they have done for the community and in trying to prepare the Butte for the future.

City leaders, though, have downplayed this dispute, maintaining the show will go on in Cripple Creek. In reality, theater-related business disputes aren’t unusual in Cripple Creek. In previous years, a big rift occurred between the Mackin family, who started the Butte and were responsible for  pioneering the classic melodrama genre in Cripple Creek, and the city.

The council unanimously approved the deal, which begins at the beginning of the 2020 season. Through the remainder of this year, theater shows at the Butte will still be handled by the Mountain Repertoire Theatre company.

In other entertainment news, the city approved a grant request through Great Outdoors Colorado for a nearly $50,000 grant for an indoor shelter at the town’s pocket park, next to city hall.

This area is part of a pet project pursued by City Administrator Mark Campbell. The city has toyed with developing this small area into a local gathering spot, with live entertainment nearly every weekend, and picnic tables and artistic displays. It also will feature a historic mural, parts of which have already been completed or started.

In a previous council meeting, Campbell noted, “We want to build community with live entertainment.”

The council lauded the park entertainment experiment. They say it relays the message that Cripple Creek is a happening place. The only regrets expressed by the council dealt with the city’s inability to fund some of the elaborate design plans for this facility, compiled by college and graduate students.

Under this deal, the city will have to pay a portion of the funds for the grant.