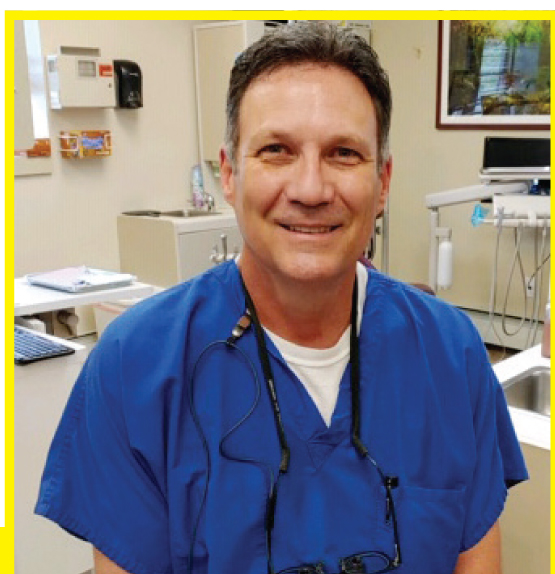 A new dentist, with strong rural roots in Oklahoma, has arrived in Cripple Creek to serve the growing needs of the gaming community.

Dr. Rusty Sullins, who sports more than 20 years of experience as a family and cosmetic dentist in Oklahoma, and even expertise in the construction arena, is the new Cripple Creek-based teeth rescue man and doc for the Forest Edge Dental Care facility, located inside the town’s medical plaza off Teller One.

Sullins began his services about two weeks ago and has already made an impression. “I really enjoy the people up here and like small towns like this.”

That said, he admits the challenges are hefty in grappling with all kinds of dental care in more rural communities, running the gamut from routine checkups and cleanings to restoring implants and root canals.  “Overall neglect is the main problem I have noticed, said Sullins. He says they plan to run a full-service dental care operation.

Sullins is quite attuned to the needs of a rural area. He hails from Oklahoma, working in private practices in both Kingfisher, Oklahoma and Oklahoma City. Sullins admits having a desire to help those from rural areas, who don’t want to travel to nearby bigger cities for services.

“People up here don’t want to go to Woodland Park or Colorado Springs,” said the Cripple Creek dentist. In fact, since manning the Forest Edge facility, he said he has treated many patients from such areas as Buena Vista.

Even when he worked in Oklahoma City, Sullins was regarded as the country dentist. “They always said I was ‘a rural dentist trapped in the city,’” quipped Sullins, who displays a folksy style and speaks in a part Texas and Oklahoma accent.

As for his main dental philosophy, Sullins cites the importance of treating patients like family members or friends.

Sullins is quite familiar with the area, as he visited this part of Colorado frequently . “We have been coming to this area for the last four years,” said Sullins

The Creek Creek dentist is a strong outdoor buff, enjoying camping, fishing, hiking and hunting. He has two sons, Trent and Jacob.

Sullins completed his undergraduate studies at Oklahoma State University, the University of Texas and Grayson College in Sherman, Texas. He also has previous experience in the construction industry, which gives him an added edge in Cripple Creek, in lieu of the expansion plans mulled by several large gaming groups. At one time, Sullins was involved in building multi-million dollar plants, churches and schools in Texas, Oklahoma and Arkansas.

In the past, Forest Edge just operated with one main dentist. Now, they have two head designated dental/docs. Besides the addition of Sullins, who mostly serves Cripple Creek and the southern Teller area, Forest Edge has added Dr. Andrea Montano to its lineup.

Montana, a graduate of Colorado State University and the University of Iowa, will mostly be working in the Woodland Park office at 491 Forest Edge Road.

Rodriguez said he is quite happy with the success of their Cripple Creek office, which opened in August, 2017. “We have had very good cooperation from the city of Cripple Creek.  They have been great to work with,” said Rodriguez.

Partially due to their success, Rodriguez, at the city’s suggestion, mulled opening a medical office there under the name of the Premiere Rural Family Medical and Dental Care group. Rodriguez was a partner in the operation, with the medical services headed by Dr. Robert Reid. But shortly after they started, the medical operation was purchased by UCHealth, which also took over the Pikes Peak Regional Hospital in Woodland Park.

“That was a good arrangement for everybody involved,” said Rodriguez.

As for their dental niche in the local community, Rodgriguez cites the fact that Forest Edge works with all levels of patients, regardless of their insurance situations. “We deal with all kinds of insurance and accept Medicare. We believe that anyone’s ability to receive treatment should not be denied.”

As an added plus, Forest Edge features a Gold Discount plan, which often works better for some patients as a good financial alternative to traditional insurance. Under this arrangement, patients pay a small annual fee and then receive significant discounts. According to Rodriguez, this plan has been increasing in popularity.

“For a lot of people, this works out better than regular insurance,” said Rodriguez.