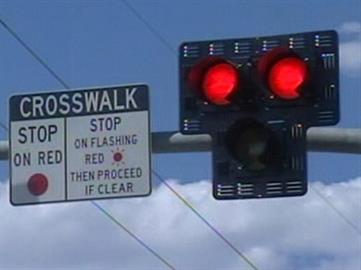 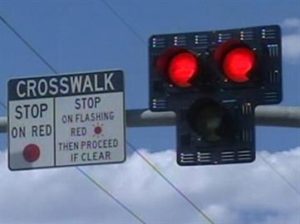 The pedestrian crossing light in downtown Woodland Park, known as the
HAWK (High-Intensity Activated Cross Walk Beacon System), has been in
operation for just over one year now.
However, it seems the protocol of how to deal with the light is still not fully understood by
motorists. The Woodland Park HAWK system light was installed and paid for by CDOT
(Colorado Division of Transportation) in May 2017, at the behest of the city and citizens, to provide a safer way for pedestrians to cross Hwy. 24 downtown and to slow traffic down.

When activated by a pedestrian pushing a button on either side of the highway, the light begins flashing amber, then turns solid red.
Pedestrians can proceed to cross during the time the light is solid red. When the time elapses, the light begins to flash red. At this point, traffic is supposed to proceed as if the intersection was a four way stop. In other words, stop and proceed with caution.

It is the time when the lights are flashing red that seems to be of confusion to motorists. In most instances, traffic remains stopped completely until the light stops flashing. This is not necessary. 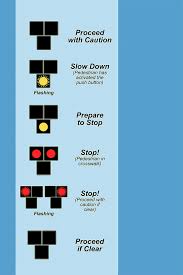 At peak traffic times, when the system is in use, traffic is known to get backed up to the light at N. Park Street in the east and the light at West Street in the west, much to the dismay of many motorists. On Friday afternoons, the traffic is sometimes backed up from Crystola to Woodland Park, with motorists enduring a 20-minute drive through town.

The Cowhand is located within feet of the light system. Owner of The Cowhand, Merry Jo Larsen, was asked if she thought the system was a good idea. She said, “Oh yeah. For the safety of pedestrians, but it has created a backup of traffic. We need to address that problem now that we have the pedestrians helped.”
As far as drivers remaining stopped at the light while it is flashing red, Larsen said, “Some people know you can move when it is flashing red and some aren’t sure, and that creates a lot of honking and a lot of anxiety.”

Elijah Murphy, operator of the Historic Ute Inn, was less sympathetic to drivers. He said, “Sorry we inconvenienced you for 30 seconds. Get over it.”

According to Public Works Director, Kip Wiley, CDOT is working on getting a sign installed on the cross bar of the system to clarify the protocol for drivers. According to Wiley, the sign will read, “Yield on flashing red after stop.” This will be a helpful step to help drivers understand when they can proceed.

Citizens and city government officials have a mostly positive attitude about the HAWK system and consider it an important asset for the safety of citizens and visitors to the city and serves that purpose well. While the city does not keep data on how often the system is used by
pedestrians, they do know that since the installation, there have been no pedestrian/vehicle accidents at that location.
Now if only motorists can get a handle on how to act during the flashing red signal, everyone will be much happier, including  many motorists struggling with huge traffic delays