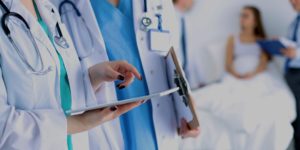 The long wait for a local doc and a full-service medical office in Cripple Creek and southern Teller has nearly screeched to a halt.

Plans are moving forward for the opening of a new 2,000-square-foot-plus center at the Medical Plaza  facility off Teller One in mid-August, complete with a full-time doctor, a registered nurse, a medical assistant and office manager. The center will be open four days a week, with Doctor Robert Reid of Divide at the helm, who sports more than 30 years of medical experience,

“This is a service that is very much needed in the community and we want to provide it,” said Greg Rodriguez, a lead partner of the Premiere Rural Family Medical and Dental Care group z(PRMD), which is spearheading the full-service medical center. More specifically, the group is well known for starting the Forest Edge Dental Care of Cripple Creek, which also features and  a larger dental office in Woodland Park that has been extremely successful.

“We are going to open a full-service medical office in Cripple Creek very soon,” said Rodriguez. He cited August 13 as their target date.

Rodriguez said the deal crafted with city fell into place, when a previous arrangement with the Loma Vista Medical Center and Matt Brown (whose real name is Matthew Paul Brown) collapsed in the 11th hour last November. A further investigation revealed the proposed operator, Matt Brown, used a false name and had been accused of health care fraud, impersonating a doctor and other serious charges, and previously served time in jail. The deal and a $100,000 loan were canceled immediately.

But unfortunately, this created many scars along the town’s path to secure a full-service medical operation for local residents, visitors and workers. This had been a goal of the community for a number of years.

As a result, Rodriguez, whose company already played a leading role in starting dental services in Cripple Creek at the Medical Plaza through Forest Edge, offered to try to resurrect the idea of landing a full-service medical office at the Medical Plaza.  He described this goal as a natural fit for their company and the city.

“Medical and dental services work really well together,” related Rodriguez. “It is really a win-win situation for everyone.”

As for other benefits of the new center, he cites the low overhead with the arrangement they have made with the city; and their company’s premiere service, with nearly 100 years of collective experience among the staff and people involved with their new office.

Ties With a Family Doc

The one positive result of the previous  Matt Brown scandal was that the city found a doctor willing to come to town. Reid sports more than 30 years of experience in the medical field with a wide variety of expertise with urgent care and working for some of the state’s premiere hospitals.  He also served with the U.S. Marine Corps and graduated from Colorado College. Besides his extensive work in the medical field, Reid has a diverse background. He did a rather dangerous infantry tour in Vietnam in the 1960s, sported stints as a broadcaster and also is an author, poet and outdoor enthusiast.

Reid is quite passionate about his role as a family doctor.  “I am board certified in family medicine since 1990 and have always considered myself first, last and always a ‘Family Doc’  regardless of where or what kind of medicine I’m practicing at any given moment, “ he said in a short bio, previously sent to the city. “We love Teller County and our three dogs have acclimated well, although snow still seems a curiosity to them being from Florida,” he added.

Reid has always desired to be Cripple Creek’s town doctor, but didn’t want to get  involved in the business aspects of the operation. That’s when the PRMD group came into play, which already had experience in serving Cripple Creek.

Rodriguez is quite optimistic about the new expanded service and says members of their medical and dental group team plan to become an integral part of the community.

“I plan to walk the streets. This (the town of Cripple Creek) is our Mayberry and he (Dr. Robert Reid) is going to be the next ‘Andy Griffith,’” quipped Rodriguez, in explaining the small-town feel of the arrangement.

The medical center will be open four days a week, with Dr. Reid available for appointments for three and a half days a week.

The new service will also accept Medicaid payments and will remain open to most forms of insurance.

Rodriguez, who has been involved in the administrative end of the dental and health care field for several decades, also cites their ability to make the numbers work. He says their company has the right financial specialists to handle a joint rural, medical and dental operation.  “We have a very qualified staff,” said Rodriguez.

Eventually, he said their group may try to expand their model to other rural areas in Colorado. He also cited the importance of having a physician-based family practice.

But he concedes that following the previous controversy surrounding Matt Brown, the city required him and his groups partners to undergo a massive vetting process.

“These guys were tough and asked a lot of good questions. But that was fine with us. We were all on the same page,” said Rodriguez.

As for the biggest need in the community, Rodriguez cites family care. He also sees issues with minor trauma. Plus, in operating a dental care office for in Cripple Creek, the Premiere Rural group has noted that Cripple Creek residents don’t like to travel to Woodland Park for these types of services.

Moreover, transportation is still a tough issue for the community, another reason that propels the need for a local medical office.

Initially, Rodriguez is hopeful that their new medical service will initially handle 16 or 17 patients a day. Moreover, he says they want to work with a variety of organizations in the community, including the Aspen Mine Center and Community of Caring, the casino association, the city and much more.

He admits that taking on the responsibility of becoming the local doc is quite challenging. “We are looking forward to it. We are very excited.”