Since 1975, the Cripple Creek Care Center has operated as a skilled nursing facility in the high country.

The organization offers a pleasant community with 24-hour assistance for anyone that is in need. For several years, the facility has held a five-star rating given by Medicare.

Recently, the care center has been making several efforts to get involved locally and to give back to the local community. These efforts are starting to gain more recognition. with the Care Center gaining a niche as a key community player.

The non-profit organization recently teamed up with other local senior service operations and formed the Golden Bridge Network. The network works together to help local citizens and puts on the Teller County Senior Expo every year.

Rainy weather that riddled the area in May prevented both events from taking place. Both organizations though had rain-out dates already set. The weather pushed the event to June 9. 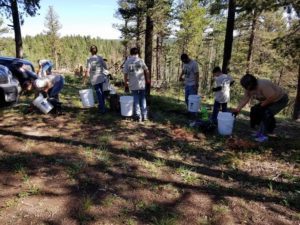 According to Laloni Bancroft,  public relations manager at the Cripple Creek Care Center, the organization was excited to help out with the joint clean-up effort.

“We formed a team of staff to volunteer and help with the cleanup,” Bancroft said. As a part of the team’s efforts, they went around to local businesses and asked for donations to the cause. According to Bancroft, the care center delivered sandwiches and food to the event’s volunteers from Jimmy John’s. Walmart donated a gift card to the cause and City Market also provided subs.

During both events that took place on one Saturday, hundreds of citizens came out to volunteer with the trash removal efforts. The Woodland Park crews worked hard on beautifying the city whereas the forest crews removed debris from the open wooded land in the Rainbow Falls area.

Teller County Commissioner Candidate Carl Andersen was also present to offer his assistance with the forest clean up.