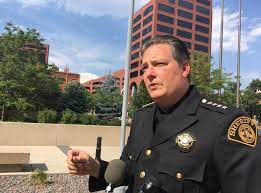 Mikesell to Investigation Critics: “Stuff It”

Teller County Sheriff Jason Mikesell has  relayed a strong  message for social media critics and so-called crime experts and (Monday-morning arm-chair quarterbacks) seeking an investigation into the investigation of a series of unfortunate  murder/suicides that have jolted the community:  “They can stuff It.”

Moreover, he is cautioning residents about believing the latest rumors and reports, dominating area social media outlets. The sheriff urged concerned residents to use the sheriff’s website, along with local newspaper reports, as the prime information source.

Mikesell, who addressed the commissioners, press and public during the annual organization meeting last week, expressed visible frustration over a charade of false reports regarding the death of a Florissant man, and his 5-year-old child. This shortly followed another murder/suicide involving a couple, a shooting witnessed by the family’s children, which also occurred in Florissant.

Both cases, and especially the latest murder/suicide-related shooting, has prompted a slew of social media posts, criticizing the department’s handling of these situations, suggesting they should have moved quicker.

Mikesell cited frequent demands to take action that could jeopardize the current investigations and show complete disregard for the victims.  “Let the process work,” said the sheriff.

Mikesell stated that some privileged information had to be withheld for the protection of the victims and for a desire to show dignity and understanding for what they are experiencing.

He defended his agency’s action, indicating that nothing could have been done to stop these tragedies.

“Bad things happen to people,” said the sheriff. “It is not easy,” added Mikesell, in discussing the toll this has taken on their department and staff.

And again, Mikesell stressed the growing mental health crisis in the community, a theme that dominated a suicide prevention forum held Monday at the Ute Pass Cultural Center. The all-day forum, entitled The Teller County Suicide Awareness Symposium, featured a variety of speakers and experts in the field, along with those offering personal perspectives, such as people who are recovering from a self-inflicted death of a spouse or loved one.

Teller’s current rate of suicides, on a percentage rate, is much higher than the state average, a statistic that is triggering alarm bells. Ashlee Shields, the suicide prevention coordinator for Community Health Partnerships, provided a short preview of the forum at last week’s commissioners session. “You are going to save a life,” a comment stressed by Shields and Teller County Commission Chairman Erik Stone, in regards to the prevention steps needed to address this issue.

Mental Health Woes Not Going Away

The sheriff, in a KRDO television interview, shortly after the latest murder-suicide incident, echoed similar sentiments. He described the current mental health service gap as nothing less than a crisis.  In his nearly 30-year stint as a law officer in Teller, he stated that he hasn’t seen this many murder/suicides in such a short period, and cited a lack of mental health resources as the community’s  main Achilles Heel. He didn’t cite specific recommendations, but contends that more action is needed in the mental health arena to help those who are struggling, especially in rural areas.

That’s why Monday’s forum served as a key first step, according to  local leaders

Mikesell’s comments last week, occurred shortly  before he was sworn in, as part of a ceremony held in the Centennial Building.  Mikesell was actually sworn in earlier during the previous week, but the county wanted to make it more official during a traditional ceremony that gave the leadership torch to seven elected officials with Judicial District Judge  Scott Sells presiding over the administration of oaths (see related story).