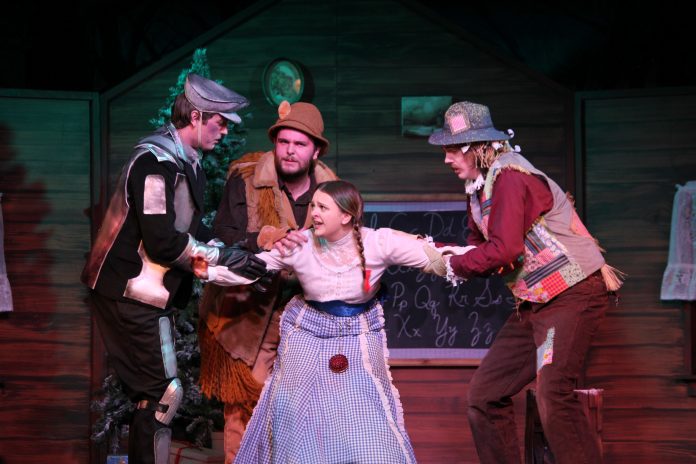 Now that 2022 is reaching a conclusion, t’s the time to get into the holiday spirit and prepare for toasting the new year.

One of the best ways to celebrate these Yuletide  occasions locally is by attending the Christmas show at the Butte Theater in Cripple Creek.

For the last six or so months, the Butte has been the talk of the region, with their entertaining season of performances, sporting a wide genre of theatrical styles.

For the month of October, the theater presented a rendition of “Young Frankenstein” that got nothing but positive reviews and many said it was the funniest show they have seen yet. And then on Thanksgiving weekend, the Butte premiered their special holiday show “Wizard of Oz Colorado,” which has garnered tremendous praise.

The new show to end the 2022 season at the Butte has been well received by visitors, gamblers, tourists and locals.  This time around, the cast was filled from members of the community as well as professional actors.

Wizard of Oz Colorado is a new holiday-themed play written by playwright Chris Sorensen. Sorensen is an award-winning playwright and author who is definitely not new to the Butte Theater.

Through the years, the Thin Air Theater Company that produces the shows at the Butte has put on 19 of Sorensen’s full length plays. His plays at the Butte alone have held more than 600 performances and have been seen by more than 70,000 people.

His newest masterpiece was inspired by L. Frank Baum’s “Oz” novel series. The playwright did a great job of integrating characters and storylines from the famous “Wizard of Oz” movie and novel with real events from Cripple Creek’s past.

And to add to the creative value of the play, Sorensen perfectly tied local history, Oz and the Christmas holiday all together. The ingenious story starts with Dorothy who is a school teacher in Cripple Creek when she wanders off away from town to find a student.

While Dorothy looks for the lost student she runs into Nicola Tesla on the top of Mount Pisgah. Tesla is in the area to test one of his latest inventions when his contraption malfunctions and sends Dorothy off into a new world.

The performers, guided by director Chris Armbrister, did an excellent job at making the play funny and adding in well-rehearsed song and dance numbers. Most attendees in the sold-out audience during a Sunday matinee were laughing nearly the entire time.

The play was a good one for all audiences as there were jokes done for all age groups. At the same time, there jokes unveiled that only history buffs would understand.

During the holiday season, the Butte Theater always puts on a community show that invites local talent as well as professionals from the Thin Air Theater Company. The latest performance featured professional actors making their debut at the Butte including Hannah Beatt, Jim Conklin, Sophie Jones, Estin Novak, and Connor Stack.

Actor Noah Peacock performs for his second season at the Butte with several members of the community. Local actors Leia Gose, Tatum Gray, Tristan Hall, Isabella Hocking, Cosima “Keiki” Ramsbottom, and Robert Taglia all return to the stage for the 2022 holiday show.

Other community members participated in their first show and their theatrical debut at the Butte including Harper Gray, Bethany Hocking, and Miller O’Donnell. The crew also includes other local names like Annie Durham who works as the vocal coach for the production.

The Christmas show started on Thanksgiving weekend and it will continue to run until its last show time on New Year ’s Eve. This week anyone who hasn’t yet seen the production can catch it on Thursday or Friday night at 7 p.m., Saturday at 1 p.m. or 7 p.m. and Sunday at 1 p.m. The show will also run at 7 p.m. Dec. 21-23 and Dec. 29-31.

Ever since the Butte Theater was taken over by Managing Director Zack Sztanyo at the beginning of the 2022 season,  following the retirement of local theater legend Mel Moser, their performances have experienced great reviews. And in 2023, the theater will no longer be taking a significant off-season as there will be a new production every month until the season of professional performances kicks off next spring.

At the end of January, the Butte will be hosting “The Effects of Gamma Rays on Man-in-the-Moon Marigolds.” This is a Pulitzer Prize-winning drama that highlights the dysfunction, despair, and ultimately, hope within challenging family dynamics. This performance will be put on by an all-female cast which will be the first for the Butte in recent history.

In February, the Butte plans on putting on a special play for Valentine’s Day entitled “Butte-i-ful Love Stories.” Sztanyo said that the Butte is looking for people in the community to submit their own personal love stories so that the Cripple Creek Community Players can turn them into a romantic one-of-a-kind production.

For more information, and for reservations, call 719-689-6402 or visit buttetheater.com.