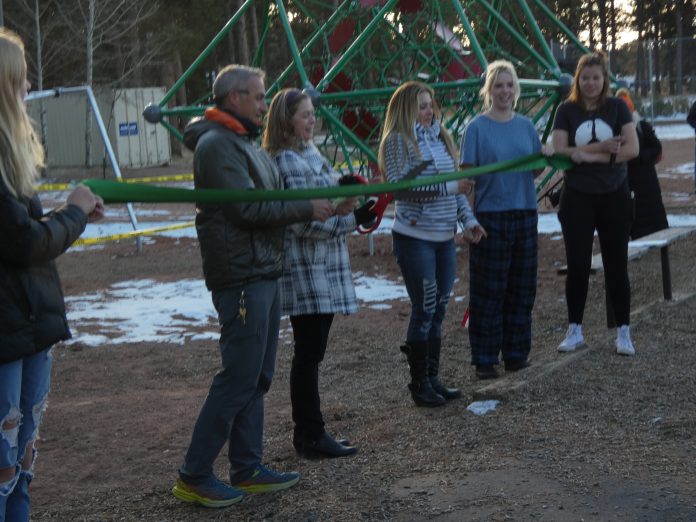 Board Kicking Off Recruitment Effort to Hire New Superintendent

As 2022 wraps up, the Woodland Park RE-2 School district is nearing the halfway point in its annual schedule, with officials and board leaders touting a spree of accomplishments, including the official opening of a new playground facility

School board meetings have focused more on business items, rather than the political drama associated with a previous recall effort.  But the district has to fill some key positions, and has starting the process of searching for a new district superintendent.

Last week, students at Columbine Elementary got a special surprise when they returned to class from Thanksgiving break. Last Monday, the elementary school held a special ribbon cutting ceremony for their new playground at the school.

The event started just after the students arrived for school at 8:30 a.m. on a cold, brisk morning. Columbine principal Ginger Slocum led the ceremony and she started with leading the kids on the national anthem and reciting the “Columbine code.”

During the presentation, several special guests were invited including Board of Education Director Chris Austin and several representatives from the district’s administrative staff. Columbine alumni students and parent volunteer Amy Schommer also came to the grand opening presentation.

According to the school’s principal, the effort to build a new playground for Columbine students started eight years ago when a previous principal was in charge. Slocum said that she has been working with students and parent volunteers to raise money in the four years she has been at the school.

She said the money for the brand new playground was raised through a number of efforts over nearly a decade. “I would like to thank all of our board of education and our school district staff because they approved funding to help us pay for this project,” Slocum said. “And, Columbine also raised close to $90,000 to pay for this project as well. We raised this money through our walkathons and readathons.”

She said that Schommer played a vital role in helping raise money for the project. The principal also mentioned that Schommer helped bring volunteers from the community back to being involved at the schools after the COVID-19 shutdowns.

Slocum had the children count down from 10 before the actual ribbon was cut, opening up the playground.

The kids returned to start class shortly after the ceremony, but then they were able to play on the playground for the first time later on the day. The kids were eager to try out the playground, as they had watched the construction efforts for the last month.

The playground behind the school is now equipped with brand new attractions, such as  shiny jungle gym, swings, a slide and other equipment. After the children were sent back to class, Schommer got the chance to be the first person to venture down the slide due to her involvement with fundraising efforts. 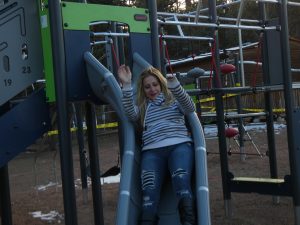 School Board Continues Search for an Interim Superintendent

After the resignation of Superintendent Dr. Mathew Neal at the end of last school year, the Woodland Park RE-2 School District Board of Education decided to have district employees, Tina Cassens and Del Garrick, share the duties of an interim superintendent to start the ’22-’23 school year. The board then decided to appoint Board Vice President David Illingworth II and Director Cassie Kimbrell to a committee that would work towards filling the position.

During the school board meeting in November, Kimbrell and Illingworth gave the board options and announced a tentative timeline to hire a new interim superintendent to finish out the current school year. The committee and board would then spend the first part of 2023 trying to find someone to fill the position permanently to start the ’23-’24 school year.

The district then posted the interim superintendent job online on November 10 opening up the position for applicants. The application deadline was last Tuesday. After all of the applications are received, the board will then vet the applications with help from the District Accountability Committee.

The board plans to pick about six or seven applicants to begin the interview process. The finalists for the interim position will then be announced on Dec. 7.

According to law, the names of the finalists must be posted two weeks before a superintendent is hired. The board’s final goal is to hire an interim superintendent by Dec. 21.

On December 5, the school district hosted a town hall meeting to get feedback from the public for input  regarding the selection of a new  superintendent, and the type of person they desire to fill this position.  “The Board is interested in gathering feedback from the community on its next Superintendent,” the district said in a social media post.