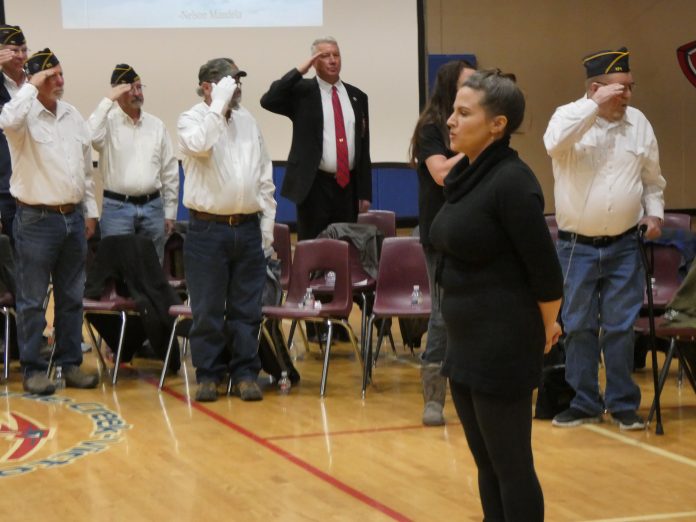 Last Friday, the nation observed  the Veterans Day holiday that started 100 years ago in honor of those who have served in the various military branches.

This holiday is especially important in Teller County due to our strong predominance of military veterans.

While some residents took the day off for the holiday, the area’s two school districts hosted assemblies to appreciate those in the community who have served.

The assembly in Woodland Park was held at the high school on the morning of Veterans Day. But in Cripple Creek, since they don’t have school on Fridays, they celebrated local veterans on Thursday morning with an assembly that included lunch for veterans and other members of the community.

The event in Cripple Creek has been held every year and it is a collaboration between the school district and the town’s local American Legion post. Cripple Creek-Victor School District Career and Technical Education Director Annie Durham has organized the event for the last few years after the event’s previous coordinator, Mark “Coach Sam” Sampson, suddenly passed away in April of 2020.

Durham said that after Sampson passed away she wanted to make sure that the annual assembly was still held. “This event is very, very important to me especially for the students to get a better understanding of the sacrifices our veterans have made,” Durham said. “So, I picked up the reins and I have been collaborating with American Legion Post 171 ever since to continue the tradition at CCV.”

The event this year featured  Rich Ingold and Dean Winn as speakers, as well as  Teller County Commissioner Commission Chairman Dan Williams, who was the keynote speaker.  Durham said that the speakers this year were very inspirational, and prompted much discussion about Veterans Day among the students.

The assembly started off with the presentation of the flags, the pledge of allegiance, and an invocation from Bill Martin. This year they also had a special performance of the national anthem from the school’s drama director, Courtney Loggins. 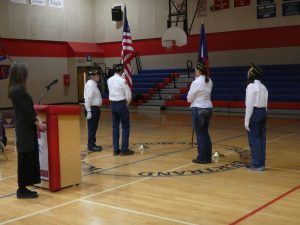 Loggins said that she had never sang the national anthem solo in front of an audience before, but she was happy to be a part of the collaboration with the local American Legion chapter. “I think it’s really important for our students and our youth to have an understanding of the history of our country and those that have come before them,” Loggins said. “Particularly of the members of the American Legion Association it is probably one of the best examples of what it means to be of service even for people who aren’t active duty. I think it is inspiring for them to see people who have given their lives for a bigger purpose. I think it’s important for them to see the ways in which the American Legion cares for the wives and families of those who have been lost to war.”

Loggins said that Durham’s eighth grade public speaking class helped run the audio and visual part of the presentation to help them learn how to properly set up an event with speakers. She also said that junior student Izabella Jamison worked to put together the slide show that was shown during the assembly. 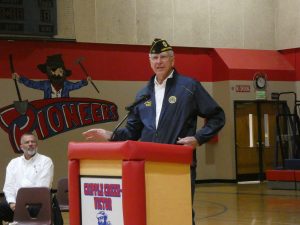 “We have done many things including remodeling a home for a 100 percent disabled Marine Corps veteran who has a son with muscular dystrophy,” Ingold said. “And that was a huge project. We had donations to our project that came in from 34 states plus the District of Columbia. We had 2,500 hours of our own labor that went in to that and when we were done it was virtually a new house.”

Dean Winn, meanwhile, talked about the kids that attend school at CCV and their promising achievements following graduation. “Who is the smartest person in the room?” Winn asked the crowd. “It’s one of you guys. One of you is the smartest person here. One of you is going to fix the problems that this world is facing whether it is energy or issues with clean water because that is going to be a problem.” 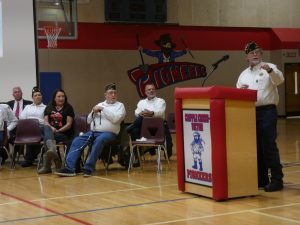 Teller County Commission Chairman Dan Williams then took the floor and explained what a veteran is, what explained the difference between Veterans Day and Memorial Day. “In the United States less than one percent of our adult population has ever served in the military,” Williams said. “During World War II, that was 10 percent. In Teller County, I’m proud to tell you that it is 22 percent. When you see a man in Teller County, one out of four are veterans. When you see a female, one out of nine are veterans. That is incredible that we have 20 times the national average of veterans right here.” 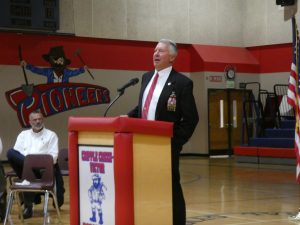