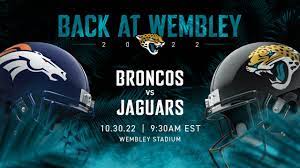 League Bottom Dwellers Fight It Out in London

After dropping another winnable game against the New York Jets last Sunday, by a miserable 16-9 final score, the Denver Broncos and the Jacksonville Jaguars fly across the pond to the land of Fish & Chips this Sunday.

Yes boys and girls, the NFL in its never ending quest for MORE money continues to try to bring American style football to the continent of soccer. This time, the NFL has pushed the limits of fan endurance as this game will be aired live at 7:30 a.m. mountain time.

I must admit (Broncos quarterback) Brett Rypien played about as well as could be expected last week when he still has Nathaniel Hackett as a head coach. A friend of mine once told me, “Every time you try to do something good, there is a force determined to stop you.” I think this fits the Broncos’ season to a tee. The problem is, some of the force determined to stop you is in the house. Hackett is a terrible head coach. He consistently can’t send in a successful play call on third and one. First downs move the ball down the field, not incomplete passes.

A large part of that force was blind refs, who seemed to catch every little infraction the Broncos made and missed at least 5-critical penalties against the Jets that changed the outcome of the game. That whole referee staff who played that game should be fired immediately.

Who the hell schedules a professional football game to be shown locally on a Sunday, at 7:30 a.m.? As I mentioned earlier, the NFL has become so greedy, they’ll throw the fans under the bus to make a buck. If the damned European countries want an NFL style football league, they can form their own. American football should be played in AMERICA!!!

But I digress. Broncos are considered the home team in this week’s game against the Jacksonville Jaguars, IN LONDON. NOOOOOOO, NOOOOO, NOOOOO!!!!

The Jags have been up and down on the year so far. Their quarterback, Trevor Lawrence, was taken number one in the 2021 draft by the Jaguars. When Lawrence did play last year he was horrible, but it wasn’t all on him. He had a lousy offensive line and not great skilled position players. Now, in his second year, he has been totally inconsistent. The Jags lost to the Washington Commanders, they split with the Colts, lost to the Texans, beat the Chargers, and barely lost to the Eagles. It doesn’t get much more up and down than that. So, the Jaguars are now at 2-5 and so are the Broncos.

Last week Lawrence threw the ball 43-times without a touchdown or interception. If that doesn’t sound like something the Broncos would do you haven’t been paying attention. (and I couldn’t blame you if you weren’t)

Frankly, I don’t know squat about the Jaguars other than they took Trevor Lawrence number one in the 2021 draft. They’ve been in the bottom of the bucket in the AFC South for so long, I’ve practically forgotten they exist. THEY LOST TO THE TEXANS!!!!

Now a word about our dearly beloved Denver Broncos. There are more unanswered questions about this team than at any time EVER. What is really wrong with Russell Wilson? Is he really hurt or is he a goldbrick? Who gave Hackett the playbook from Vic Fangio and told him this is how you do it? Why didn’t any starters play in the preseason? Are our best players getting injured because they are not in great physical condition? Why does a beer cost $7.50 at the stadium?

This week’s column is going to be shorter than usual mainly because I am so pissed at how the season is going this year after all the hoopla about Russell Wilson and the embarrassment we’ve had to endure on 5-nationally televised games.

Before I close this out, let me say I do see some bright spots on the Broncos lately. Rookie Tight End Greg Dulcich is playing well;, Jerry Jeudy is catching the ball; the defense continues to play lights out great ball; and Melvin “Fumbles” Gordon hasn’t fumbled for two games straight.

TMJ Pick: Bottom line, both of these teams are bottom dwellers. It’s going to be a toss-up as to who can play bad enough to lose. BUT!!! Broncos win this one by a score of 10-6.

With the 2022 season now almost nearing the halfway point, many Denver Broncos fans are wondering what has gone wrong this year.  But still, it’s a long season and it may just take a little time for the new system, with a new coach and highly touted starting quarterback, to mesh.  And the Broncs, whatever they do, just can’t seem to avoid the national spotlight and a spree of penalties and injuries.

In any case, the NFL season is a good way to put the mute button on all the national, and yes, local politics, not to mention an invasion of social media ramblings.  Let’s have a little fun.

Broncos are now headed to London to play the Jacksonville Jaguars on Oct. 30, with a game time of 7:30 a.m. Nope, we are not kidding and haven’t had one too many drinks to make such a claim about game time.  This is part of a  move to bring NFL ball to a continent known more for crazy soccer, rock music and historic royalty.  Maybe, this combination will help the Broncs overseas.

We realize this is probably a little too early for  most of our viewers, in frequently their favorite football watching hub. Fret not, as plenty of other great games will be featured on Sunday, as the division races get a little tighter.

If you are looking for a great local place to check out the NFL action, don’t forget McGinty’s Wood Oven Pub in Divide, “The Center of the Known Universe,” the sponsor of this year’s Denver Broncos preview columns and NFL page.