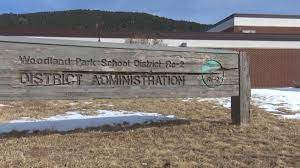 During the first two Woodland Park RE-2 School District board meetings of the new 2022/2023 year, the political climate has drastically changed, following the conclusion of a failed board ouster effort, the end of a fight over chartering the Merit Academy and other court battles.

In the previous year,  public comment sessions were filled with critics and supporters of the board, and some sessions extended for hours. The  board, which featured mostly a new slate of elected leaders voted into office on Nov. 2021, were eventually targeted by a recall campaign.

Although garnering an impressive number of autographs from voters, the campaign to oust three members fell short. Some insiders have  interpreted this as a sign of calmer times.

During this tumultuous period, the board implemented many changes, some of which were challenged by many parents and teachers.  But the fight appears to be winding to a conclusion. Plus, the major battle of chartering the Merit Academy and sharing facilities with the district is a now a done deal.

The critics speaking out against the board have not gotten as vocal.

In fact, the public comment session of the board’s September meeting last week was entirely filled with people praising the board. All three of the Teller County commissioners spoke out to show their support for the board, and asked for unity from the community.

The former councilman started his speech by thanking the board for its efforts. “I pray for wisdom and success for each and every one of you,” Saunier said. “These children and parents are your obligation and responsibility. The children are entitled to a future.”

Jameson Dion took his time to thank the school board and the district staff for being helpful and cooperative. “I have recently requested some information about one of our courses and not only did the administration respond but they actually offered me some of their time to go through and explore some of the content,” Dion said. “So, I really appreciate that and it demonstrates a desire to present a more transparent system to community members and parents.”

Teller County Commission Chairman Dan Williams then took the floor and told the board about some phone calls he received from community members that were concerned about the actions of the school board.

“On one side you have you guys who won and on the other side you have some really angry people that worked really hard to take you off your dais,” Williams told the school board. “You know who is in the middle? The kids, they have watched everything. So, I am going to ask that those who tried to recall you to support the board.”

Stone took the floor next and started by describing his positive experiences of raising two kids in the school district.

“The last part of the word ‘community’ is ‘unity,’” Stone said.