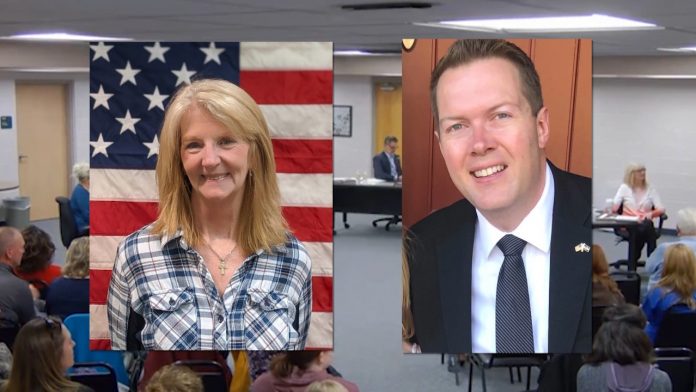 A lengthy political fight between local citizens and newly elected school board members in the Woodland Park RE-2 District has reached a conclusion.

An  ambitious board ouster effort that commanded attention for several months has officially fallen short of the finish line, according to a ruling by the Teller County Clerk and Recorder’s Office.  But regardless, school board critics say their campaign still succeeded in garnering an impressive number of petition signatures, and has relayed an important message that many in the district aren’t happy with the current school board direction.

During the last school year, a group of local residents fought against moves made by the newly elected school board leaders that led to multiple lawsuits and then eventually a recall movement.

After a two month battle, with recall organizers hitting the streets to collect petitions to recall three Woodland Park RE-2 School District board members, the county clerk’s office released the official results last week. Despite grueling efforts from a number of community members, the recall petition efforts against Board President David Rusterholtz, Vice President David Illingworth II and Director Suzanne Patterson all fell short of the goal line.

The final decision wasn’t too surprising, as the group faced a tough petition hurdle to overcome due to the high number of people that voted in the Nov. 2021 election.

When the recall organizers first pulled the petitions in the beginning of June, they were tasked with collecting nearly 3,000 signatures on three separate petitions, one for each board member. That is a pretty hard bar to reach, especially for the Woodland Park area, which has a limited number of voters.

After two months of setting up at local businesses and launching social media campaigns to get signatures to oust the Board of Education elected leaders, the organizers thought they had enough signatures to force a recall vote against Illingworth and Patterson.

The group had conceded that it didn’t have enough autographs to oust the board president, but had hopes they passed the finish line for the two other elected leaders. The majority leaders targeted are part of a coalition of conservative candidates voted into office last November.

However, even though the organizers turned in more signatures than they needed for petitions targeting Illingworth and Patterson, the recall failed due to a few hundred signatures getting rejected on each of the recall petitions submitted. The petition for Rusterholtz was turned in but it fell short of the number needed before the clerk’s office started their verification process.

In order to recall Rusterholtz, the organizers were tasked with collecting 2,693 signatures to force a recall. But by the August 1 deadline, the petitioners only came up with 2,670 signatures, so the clerk’s office didn’t go through the process to verify the signatures.

The petitions to recall Illingworth and Patterson did exceed the amount needed. This initiated the process for the clerk’s office to verify that all of the signatures were from valid registered voters who lived within the school district’s boundaries,

Most political experts were not optimistic about the recall group’s prospects once petitions were submitted. Based on recent political trends for validating signatures on recalls, a petition group generally needs to turn in double the number of signatures required due to the fact that many autographs get thrown out because the signers are not registered voters in a particular area, or the signatures don’t coincide with what is on file.

To recall Illingworth, the petitioners needed 2,644 signatures and there were 2,709 autographs submitted. But the clerk’s office rejected 386 signatures. This put the final number of valid autographs short of the required amount by just over 300.

The petition to recall Patterson needed 2,648 signatures and there were 2,697 turned into the clerk’s office. But, 409 signatures were rejected, making the total number of recall petition autographs short of the amount needed.

The other main reason why signatures did not get verified had to do with where the person who signed the petition lived. Illingworth’s petition had 100 signatures from people who did not live within the Woodland Park RE-2 School District’s boundaries and Patterson had 95.

In reality, the recall group fared pretty well in getting a good percentage of their signatures accepted, compared with the track record of other petition movements occurring in Teller County.

During the final week of the recall campaign, one of the members of the committee organizing the effort was arrested on felony charges for an incident that happened at a local grocery store parking area. Law enforcement officers allege that Divide resident Samantha Peck filed a false report accusing Illingworth’s wife, Katie Illingworth, for driving impaired with a young child in the car.

Peck then filed a witness statement again a few days later with the Woodland Park Police Department making the same allegations. Peck is currently being charged two counts of influencing a public servant and filing a false police report. She is due in court to get arraigned on her charges on October 17. A high profile attorney is representing Peck in defending her case.