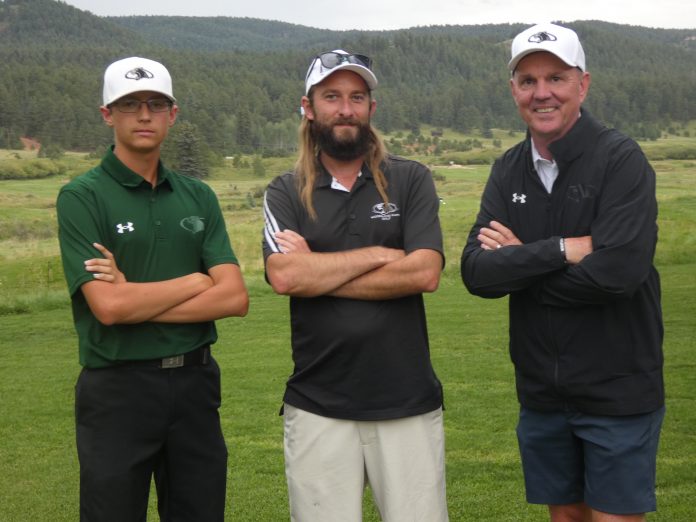 Now that school has officially started, fall sports programs are in full swing.

And one local athletic program that has boomed in the last five years deals with  golf, touted as one of the most popular sports activities in the post-pandemic era. Reports have abounded about the bustling state of golf in the nation, with tee-times filling up.

Local links action is much less controversial than the fight professional golf is enduring with a big strife these days with the battle between the P.G.A. Tour and the $2 billion-plus LIV Saudia Arabia Golf League with big-names being forced to forgo their PGA tour membership.  Ultimately, this fight is headed to court.

In fact, in Woodland Park links fever is alive and well for another season, with players getting the chance to tune up their game in their own backyard at Shining Mountain.

The Woodland Park High School Golf team has already played in some tournaments and outlook remains quite positive. .

However, Mother Nature has prevented the team from getting its necessary practice time. Last year, they only had one practice cancellation due to rain.  But this year, they have had a half a dozen cancelled practice sessions  so far.

With the departure of former longtime coach Brian Gustafson, who moved to the Fort Collins era to assume a new position, the team starts the 2022 season with a new head links skipper. The team has a few returning stars and an influx of new players.

High school principal Kevin Burr joined the ranks of the team as the head coach, and golf teaching pro Giuseppe Depietro continues his second year as assistant coach. Star golfer and team captain TJ McAfee returns for his senior year and his play is so far is looking top-notch.

According to Coach Burr, the team is in the Tri-Peaks League this year, and they have already played in one league meet McAfee won the tournament with a 74, and the team ended up only five strokes back from Salida to snag second place.

This year, the team has four returning seniors and boasts 11 players on the team. “TJ (McAfee) has had a personal best every meet out this year with an 81, 75, and 74,” Burr explained. (Those are quite impressive scores, as a completely even-par round, carded by professionals, is slated at around 72 at most courses.)

“We had personal bests yesterday (the first league tournament) from three out of our four varsity players. Sam Thorpe had a personal best and Alex Miller tied his personal best. We are sitting really good. We were league champs last year in the Colorado Springs Metro League and this year we are planning on being league champs in the Tri Peaks League.”

With McAfee’s stellar start to the season, he has high hopes for 2022. “I’d love for us to win our second league championship in a row,” McAfee said. “I want to finish first in the league for individual and make it to state.”

He said that a secondary for him is to receive a golf scholarship. He also mentioned that he would like to be a pro for a golf course after his high school career.

The star golfer said that he has seen some vast improvements in his game. “From last year, I have gained around 50 to 60 yards on most long woods which helps a lot to get through the long courses,” McAfee said. “Putting has been a big thing. I have probably dropped three or four strokes putting every round since last year.”

He said that he needs to improve his tempo and his mental game to accomplish his goals for the season.

(Trevor Phipps and Rick Langenberg of TMJ played in a team with TJ in a football program fund-raiser tournament two summers ago and witnessed glimpses of his stellar swing.  Of course, TJ had to spend a lengthy period searching for Trevor’s tee-shots, which ended in sections of wildlands not explored by mankind yet.)

According to Burr, the team score gets calculated by taking the best three players out of a team of four. During the tournament last week, the team shot 252 and their goal is to consistently reach 242 as a team.

Of the team’s two coaches, Depietro returns as the assistant coach for the second year and he brings years of teaching and golfing experience to the table. “I have taught golf for seven years travelling around to many tours,” the assistant golf coach said. “I played in one PGA Tour event. I played golf in college for two years before I turned pro. I just got back into teaching here at the Shining Mountain Golf Course and coaching the high school team.”

Principal Burr brings years of coaching experience to the team. “I have been coaching for nearly my whole life in different things,” Burr said. “This is my first chance to coach golf although I come from a family of golfers. My brother was quite good but he didn’t play in a tour event. But right now, I just love being around these guys and watching them reach their potential and seeing them get better every week.”

Local residents can get the chance to watch the golfers at the Panther Invitational Tournament that takes place on September 6 at the Shining Mountain Golf Course. The tournament is open for spectators to watch on the sidelines and cheer on the team.

Golfers will also have a chance to support the team this year as they are putting on their first golf tournament as a fundraiser. The tournament takes place on September 23 at 11 a.m.

The cost is $100 per player and it will be a four person scramble. Teams will also get the chance to bid for the high school golfers and the team that bids the most will get one of the star players as the fifth person of their team. All proceeds from the tournament will go to support the high school golf program.