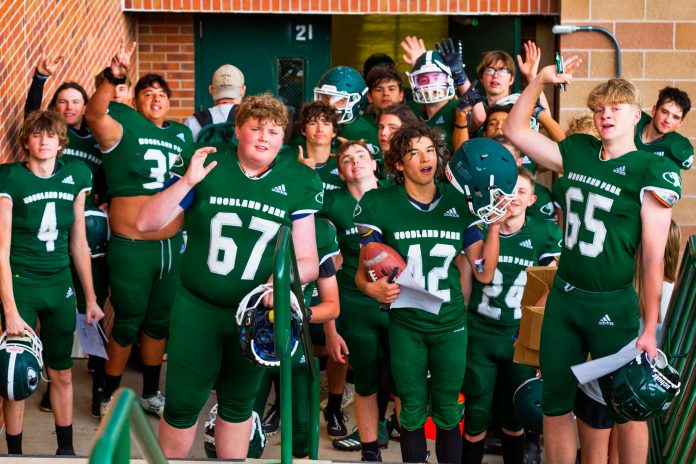 The  Woodland Park Panther football fan base ignited to a new level last season, a development fueled by a new coach and philosophy.

The team’s head skipper, Chad Drummond, took the reins of the pigskin squad and he was excited to implement a new “ground and pound” style of offense, with the roots of this assault stemming to such NFL championship teams as the Pittsburgh Steelers. The Steelers gained a legendary status for their physical toughness and dominance in Super Bowl play.  There is no reason the glory football days of the “Steel City” can’t be transferred to Woodland Park, note Woodland Park football team leaders.

This year, Drummond is back and ready to fine tune his new style of play. During last season, the Panthers ended with a .500 record, but the team embraced the fact that they were victorious during every game they played at home.  They also showed big signs of improvement from the coronavirus-plagued previous season.

During Coach Drummond’s inaugural season, he tried to implement a new culture within the team. So far this year, he has already expressed much optimism regarding  the changes that have occurred with how the players mesh as a team.

To start the 2022 season, the team’s makeup has changed vastly in numbers as a number of freshmen have stepped up to join the ranks. Interest in the district’s football program has also grown. According to the coach, last year he sported 37 players on his roster, and this year he has 56.

The team this year also showcases two female players, junior Keira White, and senior Cheyanne Gutierrez. Drummond said that Gutierrez has played on the team all four years of her high school career and she is in line to become the first female to letter in football in Woodland Park High School history.

The coach said that he would like to see more females join the team in the future. He thinks that Gutierrez has done a stellar job of setting an example and proving that girls can play football as well as boys.

The one aspect of their program the coach seemed to be the most excited about is how the culture as a team has improved in just one year.

“We thought it was going to take two years just to get the culture piece instilled, but it really seems like last year the guys really took to it,” the coach said. “We have had very structured practices and the team has been very disciplined. I’m really happy with where we are at culture-wise as far as athleticism and team camaraderie. It has been off the charts.”

Drummond said that the difficult games coming up will deal with division games, including Alamosa, La Junta, and Lamar that are always tough teams. He also said that the team’s first game this Friday against Summit will be a tough one and a good test to start out the season.

“We face Summit right out the gate and that quarterback has already signed to a D1 deal,” Drummond said. “He lost a lot of his skill players last year, but he’s no joke. So, coverage-wise we are going to have to be extremely sound.”

Here are some of key players to watch during the forthcoming season for the Panthers.

The team’s senior running back and linebacker, Aiden Hernandez, is back from an injury he suffered late last season.  Hernandez e is ready to play his role in winning more games and getting stronger as a team this year. “We have some pretty good freshmen this year and I feel like we are going to be pretty good,” Hernandez said. “I guess a weakness would be having a broken collar bone and going into the season not knowing how it is going to feel.”

The Panthers’ starting quarterback, Junior Bryce Broeker, said that he is excited for the upcoming season and he thinks that they can win more games than last year. “I’m really looking forward to winning some football games,” Broeker said. “We have put a lot of work in this year in the weight room and with our coaches. We are feeling really confident with our playbook this year and the players we have. We feel really confident with running the ball because we have some really strong seniors.”

Senior Lineman DJ Summeril said that he is excited to play football this season for the last year of his high school career. He said that he feels he is bigger and stronger than he was in the past. “We are much more disciplined this year and we are going at things much harder,” Summeril said. “The coaches are being understanding but also pushing us to be better. Confusion has been our biggest adversary when it comes to bringing freshman up to where seniors are. But this year, we have been really good at catching everyone up to the mental state.”

When the coach was asked if he planned on keeping the same “ground and pound” style offense he put on the field last year, or if he was going to change things up, his answer was very clear.

“No! We are going keep the same plan, so the defense will be relentless and the offense will be ground and pound, three yards and a cloud of dust!” Drummond exclaimed. “Blood, sweat, and tears! That’s all I know! We are a good, tough physical team. We practice hard and we play hard!”