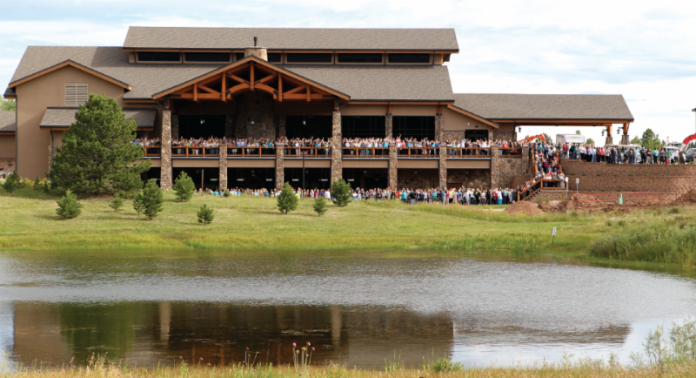 Charis Bible College has won a lengthy fight over the right to rescind a previous agreement with the city of Woodland Park, resulting in the waiving of millions in potential property tax revenue for a new housing project.

But at the same time, the Andrew Wommack Ministries organization has agreed to provide the city with a hefty gift, equating to a quarter million dollars to help offset infrastructure impacts. It is referring to this as a “gift and donation,” and part of a good faith pledge and gesture to be a good neighbor.

Details of when this offer will occur, and aspects of the specific allocations of this fund still have to get finalized.

The council approved the deal last week, but not without firing a few verbal counter bullets, indicating the city was misled from the start and probably would not have annexed the property if it knew of the fiscal consequences.

Charis officials, though, are clearly waving a victory flag.

“The (Woodland Park) City Council did justice (Thursday night),” stated Andrew Nussbaum, attorney for Charis Bible College, in a prepared statement following last week’s hearing. “We are a nation founded on the rule of law and religious freedom. By voting to allow Charis to build its student housing property-tax free, the Council followed the clear command of the law. The Ministry is hopeful that its $250,000 donation to the city of Woodland Park will be seen as a sign of good faith and friendship to the city and its residents.”

In any case, the tax battle over Charis’ future housing bid is over for now. The conflict, which has been waged on social media and in local newspapers for months, ended on Aug. 4, when a public hearing was held to determine the fate of a newly proposed housing project for the city’s Charis Bible College. For the last few months residents have been going back and forth on the issue on social media pages and during public meetings.

The council heard two requests from the bible college concerning the dorms. The first was to extend the height limit from 35 feet to 45 feet and the second was to remove a previous condition that required that the college partner with a private business to construct temporary housing making it subject to property taxes on the dormitories.

In the end, the council voted 5-2 to approve both requests. This means that Charis can start constructing housing under their 501c3 nonprofit designation and avoid having to pay property taxes. Councilmembers Catherine Nakai and David Ott were the only two that voted against the requests.

During the meeting, representatives from the college argued that they deserve to build the dorms without being subject to property taxes due to state laws regarding nonprofit organizations. They also announced that Andrew Wommack Ministries (AWM) would be donating $250,000 to the city’s utilities department as a way to acknowledge some of the public’s concerns and demonstrate their efforts to be good neighbors.

Last week’s hearing was packed by Charis Bible College supporters, who far outnumbered critics of the arrangement. Critics and many residents have accused Wommack and Wommack Ministries of backing away from a previous promise made to the city.

Initially, city officials mulled the idea of assessing annual impact fees against ministries to help offset its large projected impact for emergency services and city services with their mega development that has surpassed anything ever done in Woodland Park. They opted not to pursue this route ,when informed by Charis that the housing portion would involve a for-profit development and would be eligible for tax revenue. In recent months, Charis has retreated from this stance, and has outlined the mega sales tax revenue it provides to the area.

At last week’s hearing, city officials conceded that the law did not favor their push for property tax revenue. In essence, officials say they faced a “No Win” scenario.

Before representatives from the college were given the floor, the city’s attorney Nina Williams gave the legal background of the situation and explained the legality surrounding the requests. She said that the city has no jurisdiction over regulating ownership or tax exempt status and that they did not have the legal right to put the condition on the college housing project in the first place.

“There is no basis for any municipality in Colorado to impose a condition within any of their local land use authorities including state statutes,” the city attorney explained. “In fact, cities or local governments do not have jurisdiction over tax exempt status of anyone let alone nonprofits and religious organizations. This all being said, I do not believe that there is technically anything prohibiting the property owner from either finding a way to comply with condition #14 or proposing an alternative solution that achieves the same results without jeopardizing their tax exempt status. However, any attempts by the city to enforce this condition in a court of law would likely fail.”

Even though the housing issue was basically the only item on the agenda, the meeting still lasted for over four hours. The brunt of the meeting was the public comment session.

When public comment opened, John Gomes, chairman of the Northeast Teller County Fire Protection District John Gomes took the floor first. “After listening to what was said tonight, I guess my first response is why didn’t either the ministry or the council bring up from a legal standpoint at that time that this could not be done, that you could not tax them?” Gomes said. “What I will say is shame on you. Shame on everybody for doing that. Back in 2012 somebody should have realized that what they were doing was illegal. Because the basis for a lot of what we were going to talk about tonight is pretty much negated after hearing from the city attorney five minutes ago.”

During the rest of the public comment session, some audience members agreed with Gomes and spoke out against the college and the city making the agreement in the first place. The majority of the speakers though, spoke in support of the college’s efforts to build student housing.

Proponents stressed what the college does for the community, including providing workers and volunteers. Others stressed the need for housing, since there were limited rental options when they moved to the area to go to Charis.

When council spoke at the end, the overall sentiment from most council members was that they would be voting to approve the requests due to the legality of the condition. However, some of the members on the dais felt that Charis should follow through with the contract, whether it was legal in the first place or not.

Even though Mayor Hilary LaBarre voted to approve the requests, she still vocalized her issues with the situation. Moreover, she stated that Charis’ proposed gift came well short of footing the bill for its projected impacts.

“Unfortunately, this evening, this council has been placed between a rock and a hard place because of previous councils and previous attorneys,” the mayor stated. “I think it’s really frustrating and I don’t like hearing that what was done was illegal because it wasn’t illegal. In the constitution it also allows for two parties to contract mutually together.

Charis and the city mutually contracted and agreed upon something. And you are going back on that agreement and that is what it is. Whether we like it or not, now we are stuck. And it’s not fair to us and it’s not fair to this community. Because I don’t think the previous council would have agreed to annex you in, if you hadn’t agreed to the taxation.”