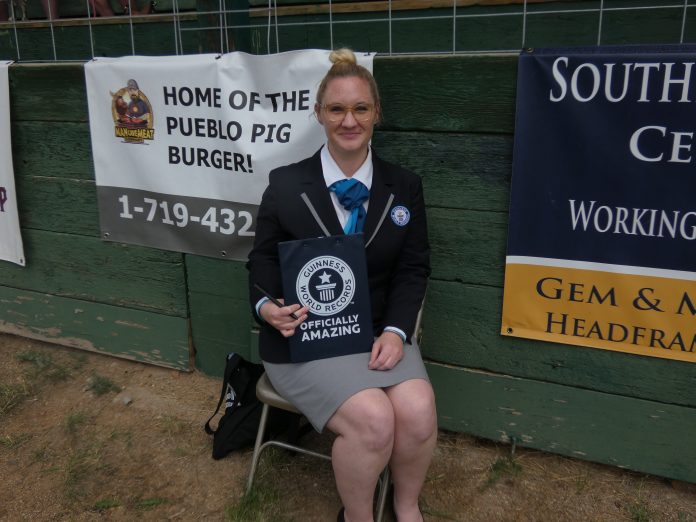 Many have heard the expression “It’s raining cats and dogs,” but in Victor last Saturday little moisture fell from the sky and it literally rained baseballs.

Although the record for the “longest hit baseball on earth” did not get broken, other things in town did, including a Channel 5 News vehicle’s windshield. 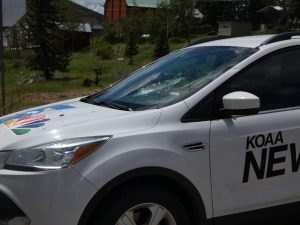 The event started at around 10 a.m. Saturday morning as a group hailing from Texas decided to put on an event to attempt to break the Guinness Book of World Record for the longest hit baseball. Top home run athletes showed up to get in on the record breaking action, as Victor was picked due to its high elevation.

However, the event seemed to bring the city a few surprises. Seeing how the Gold Bowl baseball field in Victor is rather small, most of the baseballs hit soared past the field and targeted other parts of the town. 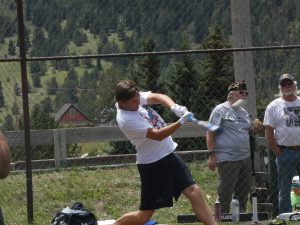 Shortly after the event started, it became clear that nobody in town was safe. Baseballs hit roofs of houses, cars driving by on the road, and even a small child.

In the end, there were no serious tragedies as most of the town folk embraced the record breaking attempt. The main casualty of the day was the windshield of the television news car that met its fate when a baseball bat slipped away from one of the competitors, went over the dugout, across the street and landed straight into the glass.

During the day though, there were several long hit balls that teased at breaking the record. Seeing balls soar past the 500-foot mark became quite common. 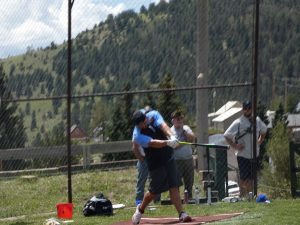 The first close hit reached 541 feet and the crowd cheered. The batter even made a comment saying that the hit would have broken the record had the competition been on flat land.

The major factor that prevented the record from breaking was that even though the air is thinner at high altitude, the land is not flat. Since the athletes were hitting the ball uphill, the baseballs landed sooner than they would have if the terrain would have been flat.

The longest ball hit during the day was smacked by Bradley Jones and it was officially recorded at 572 feet. Although close, the hit was three feet away from tying the MLB record of 575 feet set by Babe Ruth in 1921.

The record that the group was trying to break was actually set right here in Colorado. The longest baseball ever hit was recorded in 1987 when Joey Meyer playing for the triple A team, the Denver Zephyrs knocked one out of Mile High Stadium that stretched 582 feet. That record still remains.

The idea for the competition came from event organizer Ernie Granville (AKA Texas Tony Turnstile) when he was in junior college when the record was broken in 1987. “In baseball it has been well-known that elevation helps balls go further,” Granville said. “When Mile High Stadium was a triple A field it was known for longer bombs. I went to junior college in Alaska at around 4,000 feet and it makes a noticeable difference. I always had that in my head was a learned the fact. I then thought, I wonder what would happen if we went up really high like 10,000 feet in elevation.” 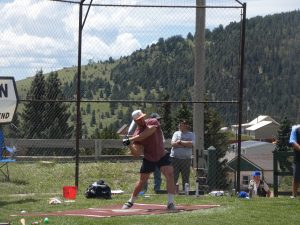 Granville then began searching the country for towns with high elevation. The only setback he found was that many towns that are high in elevation have small populations and don’t have baseball fields.

Granville’s search then led him to Colorado as it is well-known for having towns over 9,000 feet in elevation. He did his research and tried to find a high elevation city that had a baseball field and would be willing to host the event.

Granville eventually settled on Victor once he talked to city officials. Last winter, he made the trip from Texas and proposed the idea in front of city council.

The event was live streamed and had announcers giving home run watchers from all across the country the play-by-play. The announcers also interviewed Victor’s Mayor Pro Tem Buck Hakes to get some insight about the vast history of the town. 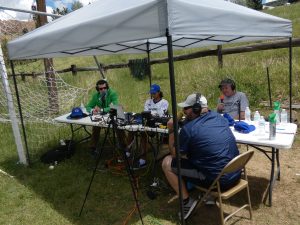 The event also had some historical significance. According to Hakes, Victor’s Gold Bowl baseball field was built sometime in the 1850s or 1860s making it one of the oldest baseball fields in the country that is still standing in the same place.